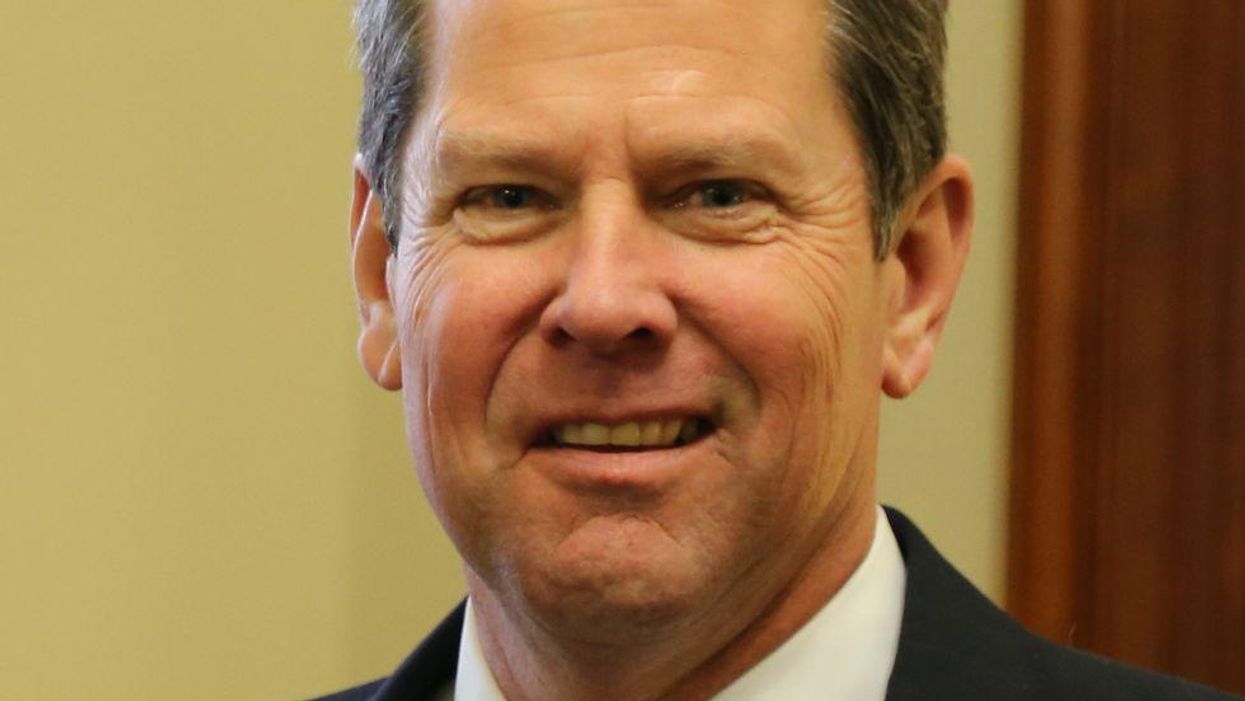 Some Georgia Republicans who promoted Fulton County's mobile voting buses last year voted to restrict them after the party lost the state's presidential and Senate races.

The Election Integrity Act of 2021, Georgia's sweeping election reform law, has widely been described as a "voter suppression" effort, largely prompted by baseless allegations of election fraud spread by former President Trump and his allies. President Joe Biden and other Democrats have compared the law to those of the Jim Crow era, and numerous voting rights groups have already sued to strike down key measures they argue will disproportionately impact voters of color. The law bans the use of Fulton County's mobile voting buses and restricts the use of absentee ballot drop boxes, among many other measures that affect virtually every aspect of the state's election laws.

Some Republican legislators who voted in favor of the bill promoted the use of voting buses and drop boxes in 2020 — before abruptly deciding to oppose them after Donald Trump became the first Republican to lose Georgia since 1992 and the party lost both Senate seats for the first time in more than two decades amid record voter turnout. Many of them cited voter concerns about election integrity — a common GOP talking point as the party pushes hundreds of new voting restrictions across the country — even though those concerns are the result of the party's own fear-mongering about unfounded voter fraud claims.

"Last year Georgia Republicans promoted the very same early voting practices that they are now decrying as voter fraud," Jessica Floyd, president of the Democratic American Bridge PAC, said in a statement to Salon. "Republicans had no concerns about mobile voting and ballot drop boxes when they were encouraging their own supporters to use them. But when Black voters use the exact same early voting practices, Republicans consider it fraud. Let's be clear, Republicans are doing this because they know they can't win if they don't rig the game. Georgia voters will hold these hypocritical politicians accountable for their blatantly racist attempt to rig future elections."

Fulton County, a heavily Black Democratic stronghold targeted by Trump and his allies with spurious allegations of irregularities, bought the mobile voting buses last year in response to long lines at polling places, which are partly the result of the state closing hundreds of polling places since the Supreme Court gutted the Voting Rights Act in 2013. But the new law bars the county from using them unless the governor declares an emergency.

State Rep. Jan Jones, the speaker pro tem of the state House, joined fellow Republicans in stoking groundless concerns about absentee voting when she signed onto House Majority Leader Jon Burns' letter raising doubts about the state's signature verification process, even though Republican Secretary of State Brad Raffensperger's has said there was "no evidence presented of any issues" with the process. Jones urged voters to use the Fulton County mobile buses in October, before voting to ban them after her party lost the three major statewide elections.

State Rep. Chuck Martin, another signatory, promoted the buses on two separate occasions in October, touting that they work just like "other early voting sites."

Aklima Khondoker, Georgia state director of the voting rights group All Voting Is Local, said the mobile voting ban "reeks of discrimination" against the "most ethnically diverse county in the state."

The law "bans buses for early voting," she tweeted. "Only Fulton County used buses in 2020. This helped thousands of voters cast their ballots, when lines were too long, and county staff were strained for resources. Disallowing them would disenfranchise thousands of black and brown voters."

Other Republican lawmakers promoted absentee ballot drop boxes, which were installed for the first time amid the coronavirus pandemic, before voting to allow them in future elections while restricting their use. The law limits ballot drop boxes to one per every 100,000 active voters or one for every early voting site, whichever is smaller, and requires the boxes to be set up inside early voting sites accessible only during early voting days and hours instead of round-the-clock outside government property.

State Rep. Bonnie Rich, who questioned the integrity of absentee ballots despite no evidence of fraud, promoted the drop boxes on Facebook before voting to restrict them.

State Rep. Don Parsons, who signed onto Burns' letter, promoted ballot drop boxes on Facebook and said he used one himself before voting to restrict them.

"It works great, and we even received notification that the ballots were received and processed," he wrote.

Parsons disputed that the law restricts the use of drop boxes but rather "provides for them to be used."

"I do believe the drop boxes worked great," he said in an email to Salon. "However, the use of drop boxes were not provided for and were not allowed in Georgia law" until last week's bill was signed, he added.

"The use of drop boxes in 2020 was made possible by the Governor's Emergency Declaration which provided leeway for the county elections offices to take measures, due to COVID, to encourage voters to use absentee voting in order to limit the number of voters in close proximity in the physical polling places," Parsons wrote. "The Governor's Emergency Declaration is no longer in effect. I am happy to report that with enactment of the [Election Integrity Act], the use of drop boxes are allowed by law, with rules and standardization for their use and deployment. The statute also provides for flexibility in the event of any future emergency events."

Republican Gov. Brian Kemp, who signed the bill into law last week, used a ballot drop box that would be restricted under current rules in November.

A lawsuit filed by Democratic attorney Marc Elias on behalf of the New Georgia Project, Black Voters Matter and Rice Inc. on Thursday argued that the restrictions on drop boxes as well as the voter ID requirement, ban on mobile voting buses and other provisions violate the First and 14th amendments.

"These provisions lack any justification for their burdensome and discriminatory effects on voting," the lawsuit argues. "Instead, they represent a hodgepodge of unnecessary restrictions that target almost every aspect of the voting process but serve no legitimate purpose or compelling state interest other than to make absentee, early, and election-day voting more difficult — especially for minority voters."

All those lawmakers voted to pass the bill despite repeated reviews of the signature verification process that prompted Trump and his allies to pressure Raffensperger to throw out legal votes. The Republican-led legislature introduced dozens of proposed restrictions in response to the specious concerns and ultimately adopted a revised version of its omnibus reform bill, while excluding even more controversial provisions that sought to ban no-excuse absentee voting entirely and restrict Sunday voting, which is disproportionately used by Black churchgoers.

The law strips Raffensperger of some of his authority after he pushed back against the fictitious fraud claims, which were repeatedly discredited by multiple audits, recounts and law enforcement investigations. Many Republicans specifically raised concerns about Cobb County, another Atlanta-area Democratic stronghold. An audit of 10% of the ballots cast in the county found just two ballots with mistakes. The law removes Raffensperger as the chair of the State Election Board and replaces him with an appointee selected by the Republican-led legislature and gives the board the power to take over local election offices, in a move understood as targeting predominantly Black and Democratic Atlanta-area counties.

The New Georgia Project lawsuit argues that Raffensperger praised the state's existing laws allowing no-excuse absentee voting, at least three weeks of in-person voting, and automatic voter registration as the "gold standard" last year. "But now that that system facilitated record turnout in the 2020 general election and the 2021 U.S. Senate runoff elections, the General Assembly has acted to radically and unjustifiably punish the electorate, by dramatically curtailing it," the lawsuit says.

The complaint goes on to cite racial disparities in socioeconomic status, housing and employment, arguing that "the Voter Suppression Bill disproportionately impacts Black voters, and interacts with these vestiges of discrimination in Georgia to deny Black voters (an) equal opportunity to participate in the political process and/or elect a candidate of their choice."

A separate lawsuit filed by the Georgia NAACP, Georgia Coalition for the People's Agenda, League of Women Voters of Georgia, GALEO Latino Community Development Fund, Common Cause and the Lower Muskogee Creek Tribe similarly argues that the law is the "culmination of a concerted effort to suppress the participation of Black voters and other voters of color by the Republican State Senate, State House, and Governor."

"Unable to stem the tide of these demographic changes or change the voting patterns of voters of color, these officials have resorted to attempting to suppress the vote of Black voters and other voters of color in order to maintain the tenuous hold that the Republican Party has in Georgia," the lawsuit says. "In other words, these officials are using racial discrimination as a means of achieving a partisan end. These efforts constitute intentional discrimination in violation of the Constitution and Section 2 of the Voting Rights Act."