Why Texas froze -- and California fried: This disaster was 90 years in the making 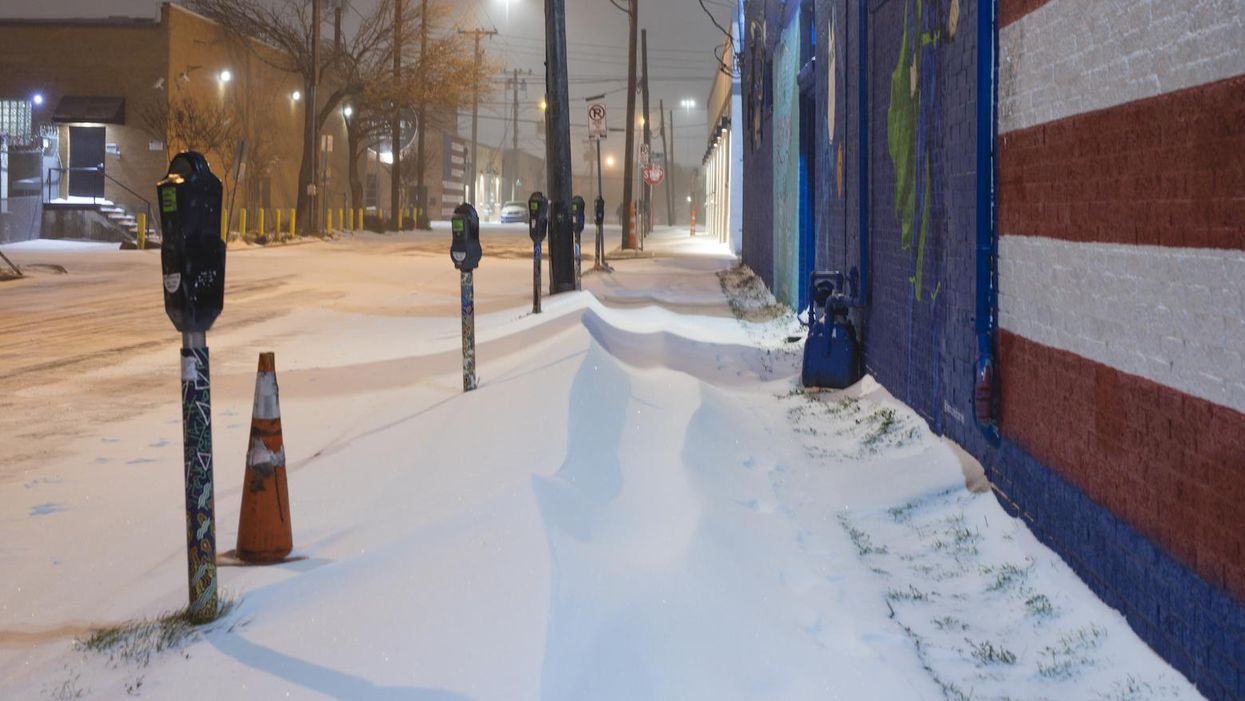 The catastrophe that swept Texas last week was 90 years in the making. Its roots lie in a decision during the 1930s to escape federal regulation of power rates under the terms of Franklin D. Roosevelt's New Deal by forcing all Texas utilities to avoid importing or exporting power across state lines, thereby pretending that Texas electricity was not actually part of the national economy.

As the biggest oil and gas producer in the world, Texas had already set itself up in the business of regulating the global price of oil through the Texas Railroad Commission, which set limits on oil and gas production to keep oil prices artificially high. So going it alone on electricity prices seemed like a logical extension — except that in the case of electricity, Texas business wanted low prices, not high ones.

Implicit in the creation of what Texans call their "power island" was an understanding that cheap electricity was the only significant goal. Reliability came a distant second and clean air wasn't even on the radar screen. When Texas deregulated its electricity sector in 1999, it went further than most states. ERCOT, the Electric Reliability Council of Texas, kept prices low by refusing to pay utilities for keeping standby generation capacity in case of an extreme weather event. Since Texas also remained disconnected from other regions which might have provided backup power in the case of a shortage, the state denied itself any kind of safety net, either in-state or elsewhere.

Extreme heat waves were very much on the Texas radar, because high-demand summer days were frequent — and profitable for generators. So money was made, and summer blackouts were few, for almost 20 years. As the climate spun out of control, however, even in summer Texas barely avoided resorting to rolling blackouts to manage record demand during worsening hot spells. (In fact, in El Paso, on the state's western border, they happened.)

Meanwhile, the pretense that it never gets cold in Texas kept obstructing efforts to make the ERCOT grid winter-hardened. In 1989, federal regulators pointed out that Texas lacked simple weatherization measures common to more northern states. In 2011, winter storms triggered rolling blackouts. In 2014, the term "polar vortex" came into common use as Texas once again lost winter power. In 2018 and 2019, the polar vortex struck two years in a row.

Yet Texas business and political leaders kept insisting that the cost of winterizing the power system was simply not worth it. The state's major industrial power users didn't want to pay their share of the bill. Any conversation about providing backup by connecting the Texas grid to the rest of America remained totally off limits.

This year, of course, disaster became catastrophe. Those who doggedly opposed investments in reliability have had to find a new tune — their favorite being to blame renewable energy, in spite of manifest evidence that this is untrue.

Former Texas governor Rick Perry went to bat for the state's electron isolationism: "Texans would be without electricity for longer than three days to keep the federal government out of their business." Perry went on to blame the state's reliance on wind power for the crisis, a richly ironic canard. It was Perry himself who led the campaign to create Texas's innovative and wind-power targeted CREZ transmission project, which was largely responsible for the fact that 2020 was the first year in which Texas got more electricity from wind than from coal.

Perry's scapegoating of his own wind revolution for the blackout was echoed by current Gov. Greg Abbott, who said, "Our wind and our solar got shut down, and they were collectively more than 10 percent of our power grid, and that thrust Texas into a situation where it was lacking power on a statewide basis." That was a lie. As the chart below shows, most of the collapse in power generation came from natural gas, coal and nuclear, since even in a normal winter Texas gets relatively little of its power from wind and solar. (Although Texas wind turbines lack simple weatherizing technology used by wind farms in other states to its north.) 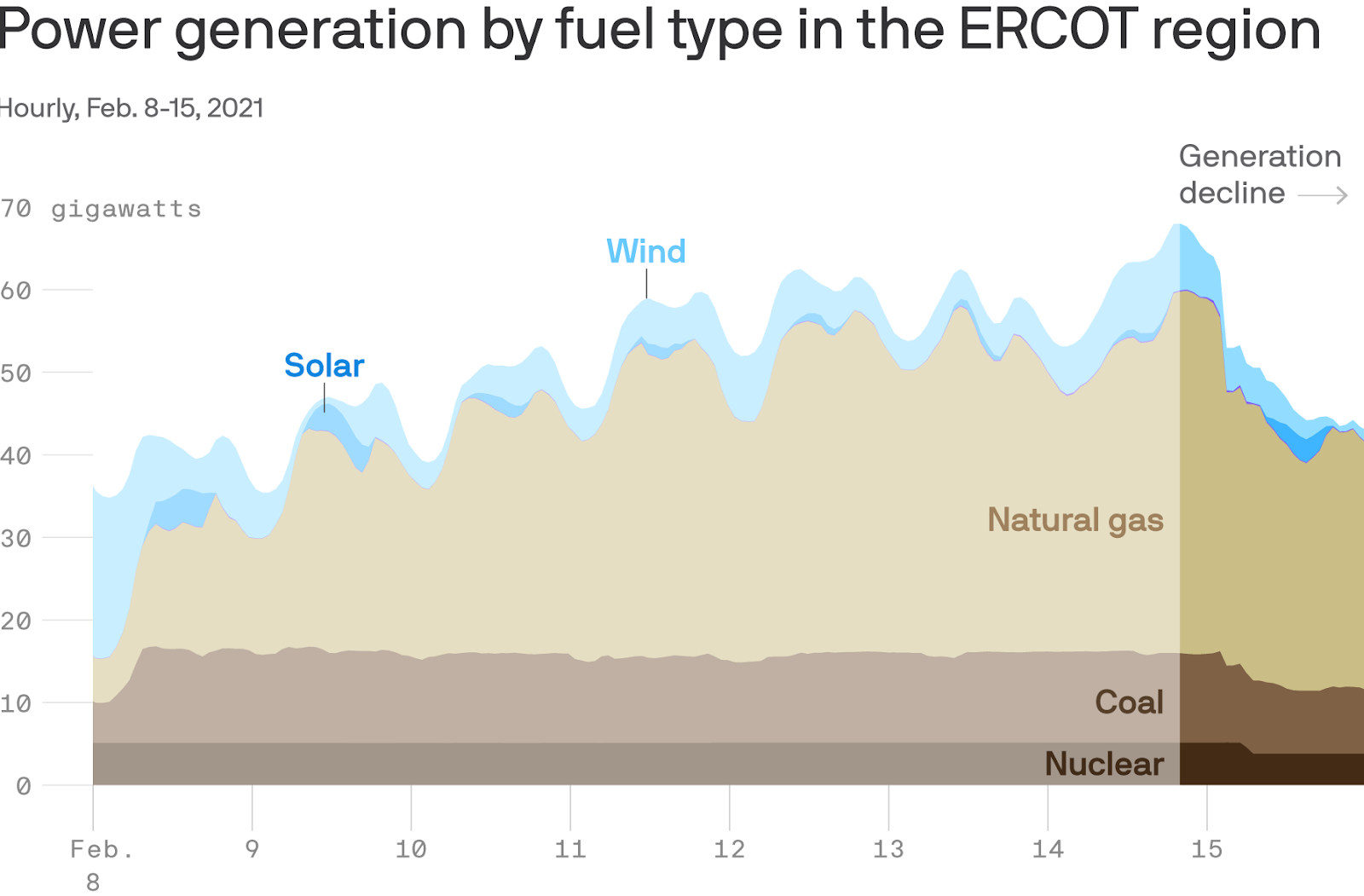 As the disasters cascaded — no power, shut-down oil and gas production, no water, unreliable food — voices from urban communities suffering freezing homes flooded by burst pipes began to fire back, blaming the state regulators for their refusal to invest in winter-hardy generation for the state. It was "just horrible to see," said Dallas Mayor Eric Johnson. "The power and water outages in Texas have created a situation that's worse than even the early days of the pandemic," warned Rep. Joaquin Castro, a Democrat from San Antonio.

But deeply ingrained in the Texas power sector was the governor's belief that hard freezes didn't happen often enough to be worth preparing for. That misguided belief was os deeply ingrained that when the Texas Monthly asked ERCOT CEO Bill Magness if the savings from failing to build resilience were worth it to consumers, he dismissed the question: "I am not aware that we have ever conducted a real cost-benefit analysis on that topic." That wasn't true. ERCOT had analyzed this, and it turned out that the agency's eight-year-old estimate of the daily cost of such a blackout was $2.8 billion — enough to cover a lot of weatherization. The 2020 freeze brought a whole new class of costs to bear. Not only was electricity generation shut down, but as a result so were many oil fields. IHS Markit estimated that the Texas freeze had shut down at least 20% of the nation's oil and gas production, largely in the Permian Basin, which made it harder to get gas-fired electricity back on line.

As more and more voters got more and more upset, a new refrain was heard, even from Abbott: Texas needed to weatherize. The governor called for a special legislative session to get it done, and was suddenly outraged. "Everyone knows how challenging the past few days have been for our fellow Texans," Abbott said. "All of us in the state of Texas believe it is completely unacceptable that you had to endure one minute of the challenge that you faced."

So can we write off the Texas tragedy to Lone Star exceptionalism? A quasi-secessionist electricity island, with inadequate requirements for getting ready for winter, pays the price?

Up close it looks like it. But pull back and include the summer of 2020, and it's clear that what went wrong in Texas has a lot do with the fires that brought California to its knees six months earlier. The summers of 2017 and 2018 had made it clear that California didn't have nearly enough firefighters standing by for an event like the lightning strikes that rained down in August 2020. It was also clear the state had allowed PG&E and its other utilities to invest too little in fire hardening rural power lines. Worse yet, most communities in the fire-hazard areas had failed to adopt or enforce adequate fireproofing measures on homes and businesses. But California's politics are — in the American context — at polar opposites to Texas. (In fact, California's problem is significantly harder to fix than the polar vortex threat to Texas.)

To understand why neither red nor blue America can reliably and safely provide electricity to its population, we need to contrast the American attitude towards natural disasters — they happen, but we recover — with the Dutch approach to flooding, which is more like: We can't prevent the storms, but we can protect ourselves against the damages. Since the Dutch adopted this attitude as national policy 70 years ago, not a single citizen has died in a flood. Prevention has proven cheaper than rescue and repair: Even though a third of the nation lies below sea level, Holland's annual expenditures for flood prevention, at $1.5 billion, are a fraction of American costs for flood recovery, even on a per capita basis.

If President Biden is looking for another issue on which he can unite the country, starting a conversation on the need to massively invest in fire, flood and storm resilience in a climate-stressed world offers a promising opportunity. How about "Build it back safely" as a subset of "Build it back better"?