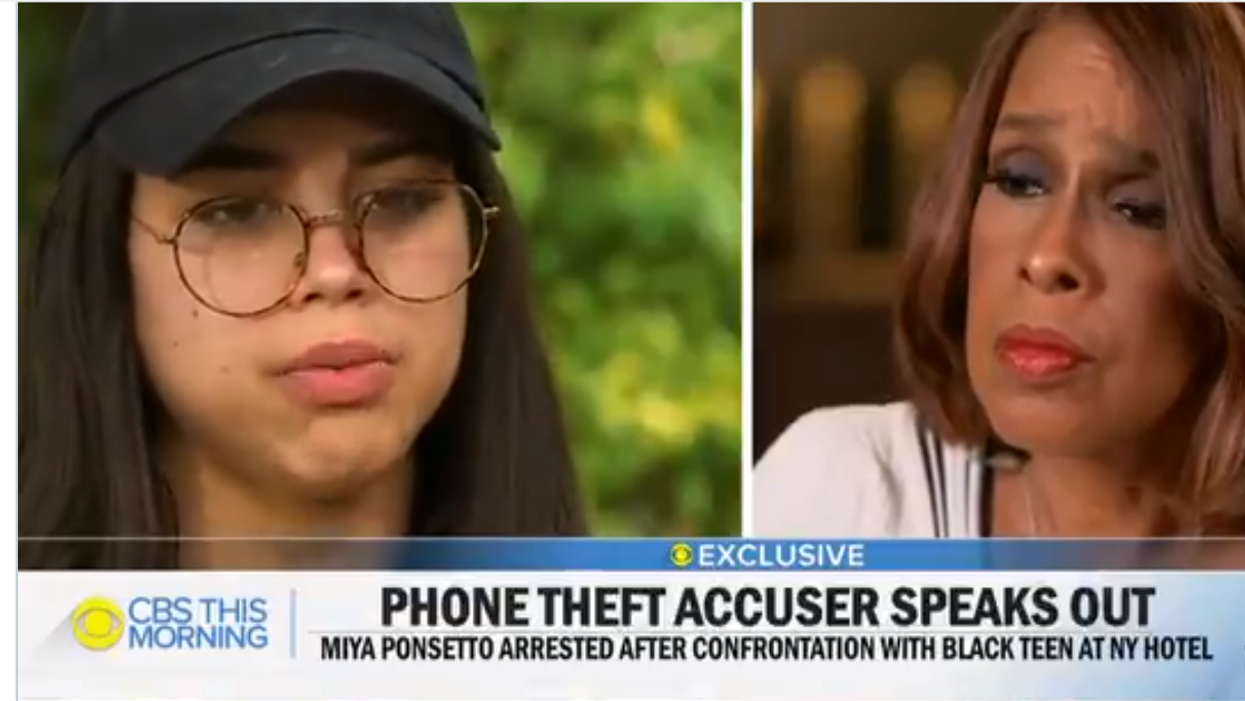 Miya Ponsetto sparked outrage on social media when footage captured her attacking the 14-year-old son of a Grammy Award-winning trumpeter Keyon Harrold. The 22-year-old accused the Black teenager of stealing her cell phone, but he hadn't — it was found shortly thereafter.

During an interview with CBS News' Gayle King, Ponsetto attempted to defend her behavior despite the attack being caught on the SoHo Hotel's surveillance.

"I admit yes, I could have approached the situation differently or maybe not yelled at him like that or made him feel some sort of inferior way, making him feel as if I was like, hurting his feelings, because that's not my intention," Ponsetto said. "I consider myself to be super sweet. I really never, never meant for it to hurt him or his father either."

Although Ponsetto described herself as "super sweet," King quickly reminded her of her actions that were caught on camera. Despite the obvious, Ponsetto doubled down on her stance as she attempted to present the scenario in a way she believed would appeal to King.

"How would you feel if you were alone in New York and you're going to spend time with your family during the holidays and you lose the one thing that gets stolen from you that has all the access, the only way that you're able to get back home?" Ponsetto replied.

When asked if she approached others in the lobby the same way she approached the teen, Ponsetto admitted that she did not. Ponsetto pivoted and accused Harrold of assaulting her by "slamming [me to the ground and pulling my hair and throwing me and dragging me across the ground." It's not clear if video evidence of these claims exists.

She went on to offer a minuscule apology for her actions. "The footage shows me attacking his son. Attacking him how? Yelling at him? Yes," she said, without addressing the physical assault. "OK, I apologize, can we move on?"

"Basically, I am a 22-year-old girl," Ponsetto said, adding, "I don't … racism is … how is one girl accusing a guy about a phone a crime? Where is the context in that? What is the deeper story here?"

However, King was not deterred. Since the hotel did recover Ponsetto's phone and it was confirmed that the teen never had it, King focused on the aftermath of what she is facing.

"You seem to have attacked this … young boy … this teenager about your phone, and then it turned out he didn't even have your phone," King said. "That's the thing. You're saying, 'Look, I'm 22 years old,' you're 22 years old, but you are old enough to know better."

At that point, Ponsetto interrupted King saying, "Enough," which led to her attorney leaning over to whisper to her.

Although Ponsetto is offering excuses, the teen's parents have fired back with a different perspective. Shortly after the interview aired, the parents issued a statement to the news network as they highlighted the real issue with her actions: racial profiling.

"This is not about an apology from someone who until a few days ago was claiming she did nothing wrong, and in fact alleged Keyon Harrold Sr. had assaulted her," the statement read. "[Ponsetto is] someone who targeted a 14-year-old Black child because of the color of his skin."

Miya will be dealt with by law enforcement, and hopefully, be charged with the assault of our child. We are not interested in what she has to say, in her feigning remorse, and we certainly will not provide her a public platform and audience to do as much. Our energy right now is directed at the healing of our son, and in bringing attention to the larger societal issues that led to the disgusting physical and verbal attack that continues to traumatize our family.

After the interview, Ponsetto found herself at the center of another altercation. When an officer Ventura Police Department attempted to pull her over, that encounter also escalated into a physical altercation. Instead of pulling over for the officer when she was stopped, Ponsetto is said to have driven an additional three blocks and did not stop until she arrived at her own home.

Once there, the cops stated that she "nearly slammed her car door on a deputy and ended up getting yanked from her ride," according to the New York Post. Ponsetto is currently behind bars and has not been granted a bond. She will reportedly remain in custody due to a hearing that will determine whether or not she is extradited back to New York.