'Give me one example!': GOP lawmaker goes down in flames on CNN trying to defend Trump's voter fraud claims 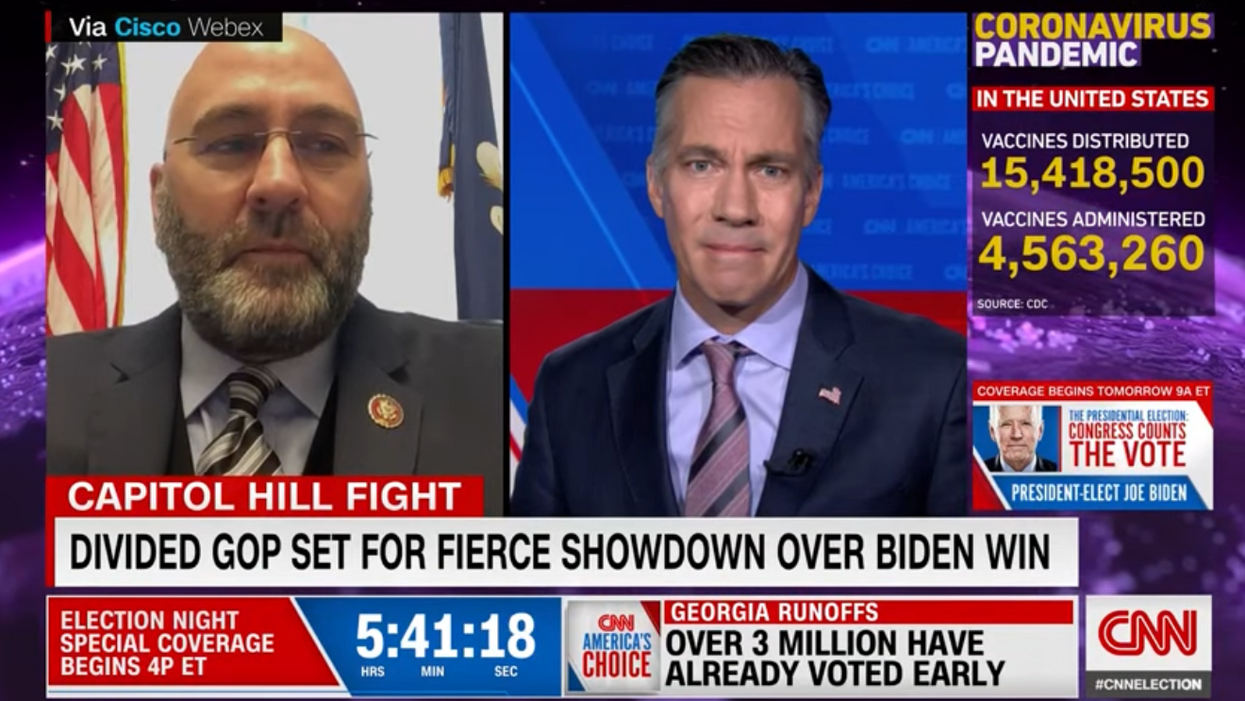 Rep. Clay Higgins (R-LA) found himself in an awkward position when asked to provide at least one example of voter fraud that would support President Donald Trump's demands for lawmakers to challenge the Electoral College vote. Now, footage of his latest rollercoaster interview is going viral on multiple social media networks.

During a CNN appearance on Tuesday, Higgins spoke with host Jim Sciutto where he confirmed that he will be challenging the outcome of the election during the upcoming Congressional hearing.

When asked why he was planning to do so, he defended his decision claiming all 50 states must abide by their own election laws. Sciutto reminded Higgins that "all 50 states have certified the results."

Not deterred, Higgins noted that it was "completely constitutional" to challenge the electoral votes states have certified. He, then, admitted that Republican lawmakers "won't be overruling anything." Sciutto went on to question Higgins' claims of voter fraud as he noted that the U.S. Supreme Court and Department of Justice have not found significant evidence of voter fraud.

"Give me one example!" Sciutto said.

Rep. Clay Higgins (R-LA), who will object to certification tomorrow, claims "we have a preponderance of evidence th… https://t.co/8cHJYsoGxL
— The Recount (@The Recount)1609860711.0

"What evidence do you have that the Justice Department does not?" Sciutto asked. Higgins claimed Republicans have "a preponderance of evidence that election crimes may have been committed in six of the sovereign states." Sciutto went on to press for specifics regarding the so-called evidence Higgins was referring to. "I'm asking what evidence you have to contradict the state Republican election official there as you're claiming right now?" Sciutto asked. "What evidence do you have?"

An irritated Higgins repeated his previous remarks but once again offered no actual evidence of fraud. Realizing the two would get nowhere with their discussion, Sciutto moved to conclude their talk as he reiterated that he had given the Republican lawmaker "multiple chances to present evidence of the fraud."

However, Higgins insisted he had provided "multiple examples" of fraud. As Jan. 6 approaches, many other Republican lawmakers and Trump supporters are taking a stance similar to Higgins. Despite having no evidence of widespread voter fraud, Republican lawmakers are still moving forward with Trump's dangerous coup attempt. However, their efforts are expected to prove ineffective.

While Trump and many others are hoping Vice President Mike Pence's role will impact the Congressional hearing, he does not have the constitutional right to overturn the election.