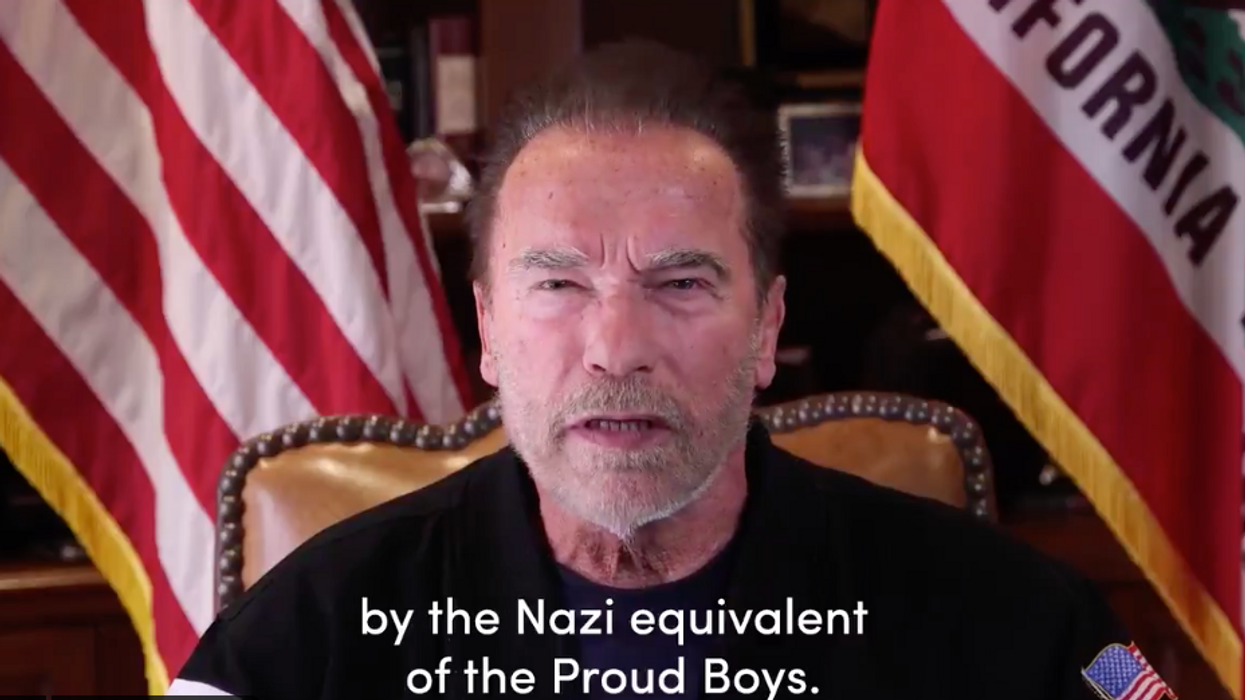 In the days since a group of pro-Trump insurrectionists stormed the U.S. Capitol in Washington, D.C., sending elected officials into temporary hiding and the nation into a period of shock and horror, a number of Republicans have spoken out against Donald Trump. Whether they've criticized his endless insistence that he actually won the 2020 presidential election (he didn't), called for Trump to resign, both long-standing critics and newly vocalized GOP members are speaking out against Trump.

In a moving, personal video, former California Governor Arnold Schwarzenegger succinctly described Trump as a "failed leader" and someone who "will soon be as irrelevant as an old tweet." Direct jabs aside, however, Schwarzenegger also dove deep into serious matters and discussed intergenerational trauma, personal examples from his youth in Austria, and directed a very important message to not only Trump but the Republicans who enabled him. He also wished "great success" to President-elect Joe Biden for when he takes office in less than a month. Let's check out the video below.

First, in reference to Trump, Schwarzenegger states, "President Trump sought to overturn the results of an election. He sought a coup by misleading people with lies. He will go down in history as the worst president ever. The good thing is he will soon be as irrelevant as an old tweet." Obviously, the extra layer of zing here is that Twitter (as well as a handful of other social media platforms) recently permanently suspended Trump from their platforms.

On a personal note, Schwarzenegger discussed growing up in the long-term wake of Kristallnacht (also known as the Night of Broken Glass). Schwarzenegger described Kristallnacht as "a night of rampage against the Jews carried out in 1938 by the Nazi equivalent of the Proud Boys," and said the insurgent's attack on the Capitol last Wednesday was "the Day of Broken Glass right here in the United States. But the mob did not just shatter the windows of the Capitol. They shattered the ideas we took for granted [and] trampled the very principles on which our country was founded."

Schwarzenegger talked about how intergenerational trauma (though he didn't use that term) can affect an entire society. In his case, Schwarzenegger described being a child and watching his father come home drunk once or twice a week, hitting and scaring his mother. He said it felt normal because he knew it happened at neighbors' houses, too. Why? According to Schwarzenegger, this behavior tied to collective guilt and horror after World War II, saying these men were "in emotional pain for what they saw or did." In his words, he grew up "surrounded by broken men drinking away the guilt over their participation in the most evil regime in history."

"It all started with lies, lies, lies, and intolerance," Schwarzenegger stated. "Being from Europe I've seen firsthand how bad things can spin out of control."

In terms of his fellow Republicans, Schwarzenegger called out those who "enabled" Trump's "lies and his treachery." He also quoted former President Teddy Roosevelt to them, saying, "Patriotism means to stand by the country. It does not mean to stand by the president."

"To those who think they can overturn the United States constitution, know this: You will never win," he stated, asking for the people responsible for the attack on the U.S. Capitol to be held accountable.

Here's the video on Twitter, which has garnered more than 6 million views at the time of writing. It's about seven minutes long, but honestly, is worth the full watch.

My message to my fellow Americans and friends around the world following this week's attack on the Capitol. https://t.co/blOy35LWJ5
— Arnold (@Arnold)1610282700.0

You can watch the full video on his YouTube channel below.