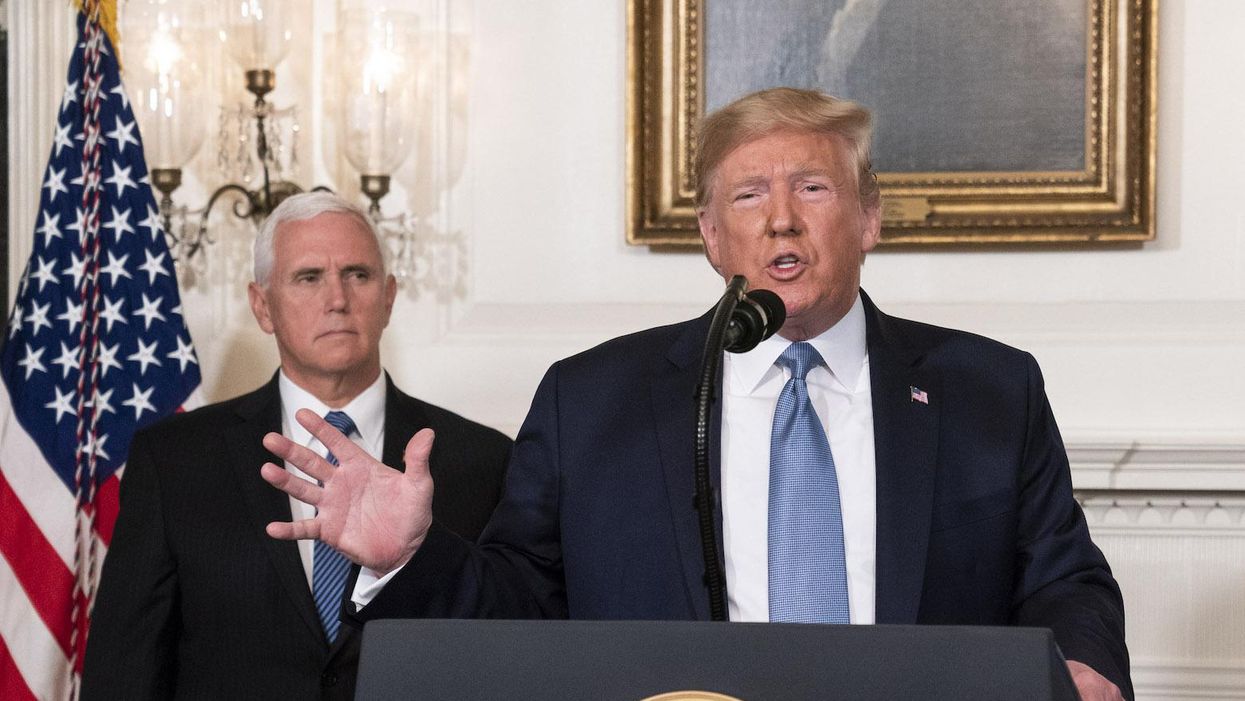 Donald Trump isn't about to concede the presidential election to Joe Biden. Not now, and seemingly, not ever.

Anyone who has followed Trump closely knows two things about the man that make it relatively easy to anticipate his next move. The first is that, ideologically, Trump is a fascist who has no regard for democracy. The second is that, psychologically, he is a malignant narcissist who suffers from a toxic stew of narcissism, paranoia, antisocial personality disorder and sadism. As a result, it is virtually impossible for him to acknowledge, much less accept, failure.

Trump also faces the prospect of being prosecuted for a variety of state and federal felonies upon leaving office. And while he can avoid federal jeopardy with a pardon, to do so he would either have to resign and permit Mike Pence, as his successor for the duration of the lame-duck period, to do the honors or undertake the legally dubious step of issuing a pardon to himself. Even then, he would remain exposed to the ongoing probe conducted by Manhattan District Attorney Cyrus Vance into allegations of tax, business and insurance fraud under New York law.

How, then, does a fascist and a malignant narcissist who faces jail stave off defeat? Having lost both the popular vote and, more importantly, the tally in the Electoral College, and after being rebuked by numerous state and federal courts, including the Supreme Court, Trump is moving to his next option—staging what would amount to a coup d'état, invoking the complex provisions of the 12th Amendment, when Congress meets in a joint session on January 6 to confirm the winner of the presidential race.

That there will be an attempted coup is no longer a matter of speculation. In an appearance on "Fox & Friends" on December 14, Stephen Miller, perhaps the most deranged and malevolent of Trump's senior advisers, openly declared the administration's plan to overturn the election results in the upcoming joint session.

A gambit under the 12th Amendment is a long shot, to be sure, but so was Trump's initial presidential bid back when he descended the escalator at Trump Tower in June 2015 to announce his first campaign and stigmatize undocumented Mexican migrants as "rapists" and drug traffickers. It behooves us, then, to take Trump and Miller seriously.

Ratified in 1804 in the aftermath of the hotly disputed election of 1800 (which ultimately seated Thomas Jefferson as the nation's third president), the 12th Amendment modified the procedures that govern the Electoral College. And while the 12th Amendment itself was modified by the 20th Amendment (which moved up the presidential inauguration from March to January), its basic provisions remain intact.

The president of the Senate's role thereafter is ministerial and mandatory. Under the terms of the amendment, the president of the Senate "shall," in the joint session, "open all the certificates and the votes shall then be counted; The person having the greatest number of votes for President, shall be the President," provided—and this is the key to appreciating the impending coup—that such person receives a majority of the electoral votes.

But what happens if the Electoral College vote count is disputed? To understand what occurs then, we have to toggle back and forth between the 12th Amendment and a statute passed by Congress more than 130 years ago—the Electoral Count Act (ECA) of 1887. Under the ECA, if a single member of both the House and Senate signs and submits a challenge to any state's electoral votes, the joint session must immediately go into recess to allow each chamber to meet separately and debate the merits of the objections. To be sustained, objections require the support of a majority of the members of each chamber. Absent a majority, the objections fail.

It's all but certain that when the joint session convenes on January 6, objections to the electoral votes cast in the swing states of Arizona, Nevada, Georgia, Wisconsin, Michigan, and Pennsylvania indeed will be lodged. Republican Rep. Mo Brooks of Alabama, one of the zaniest of the GOP's bloated stable of right-wing fanatics, has announced that he will file an objection. Alabama Republican Senator-elect Tommy Tuberville, the thick-headed former college football coach, has suggested he will join Brooks.

A drama not seen in this country since the election of 1876, when alternate slates of electors were sent to the Senate on behalf of Democrat Samuel Tilden and Republican Rutherford B. Hayes (the eventual winner), will then ensue.

Reminiscent of 1876, alternate pro-Trump slates of Republican electors have met in several swing states, and plan to send their votes to the Senate in time for the joint session to back up the objections that will be raised by Brooks and Tuberville.

Both the 12th Amendment and the ECA address a doomsday scenario in which no candidate wins a majority in the Electoral College, whether because of the presence of alternate electors or for other reasons. In that event, the task of naming the next president is transferred to the House. The House then conducts a "contingent election," but with each state delegation getting one vote rather than each representative casting individual votes. Since Republicans will hold 27 House delegations in the next Congress, Trump would emerge victorious.

Fortunately, a contingent election in the House is highly unlikely. Because the Democrats control the House, and several Republican senators, including Senate Majority Leader Mitch McConnell, have recognized Biden as president-elect, the Brooks and Tuberville objections, even if backed by alternate electors, are destined to fail, as their objections will be subject to an ordinary majority vote in each chamber. In addition, to date, no votes cast by rogue pro-Trump electors have been certified by state governors or officially by any state legislatures, as required by the ECA.

But even that won't necessarily end Trump's attempted coup. According to press reports, Trump is considering advice offered by Michael Flynn to declare martial law to force a new election in the swing states that voted for Trump. Flynn, the disgraced retired Army lieutenant general and former national security adviser whom Trump pardoned in November for lying to the FBI, has been promoting the idea of martial law on Twitter and on right-wing media.

In any other era, Flynn would be dismissed as a caricature straight out of "Dr. Strangelove." The trouble is, we're living in the increasingly treacherous waning days of the Trump era, dominated by a fascist and a malignant narcissist desperate to remain in power.

Trump's coup will fail, but not before leaving a lasting stain on American democracy.