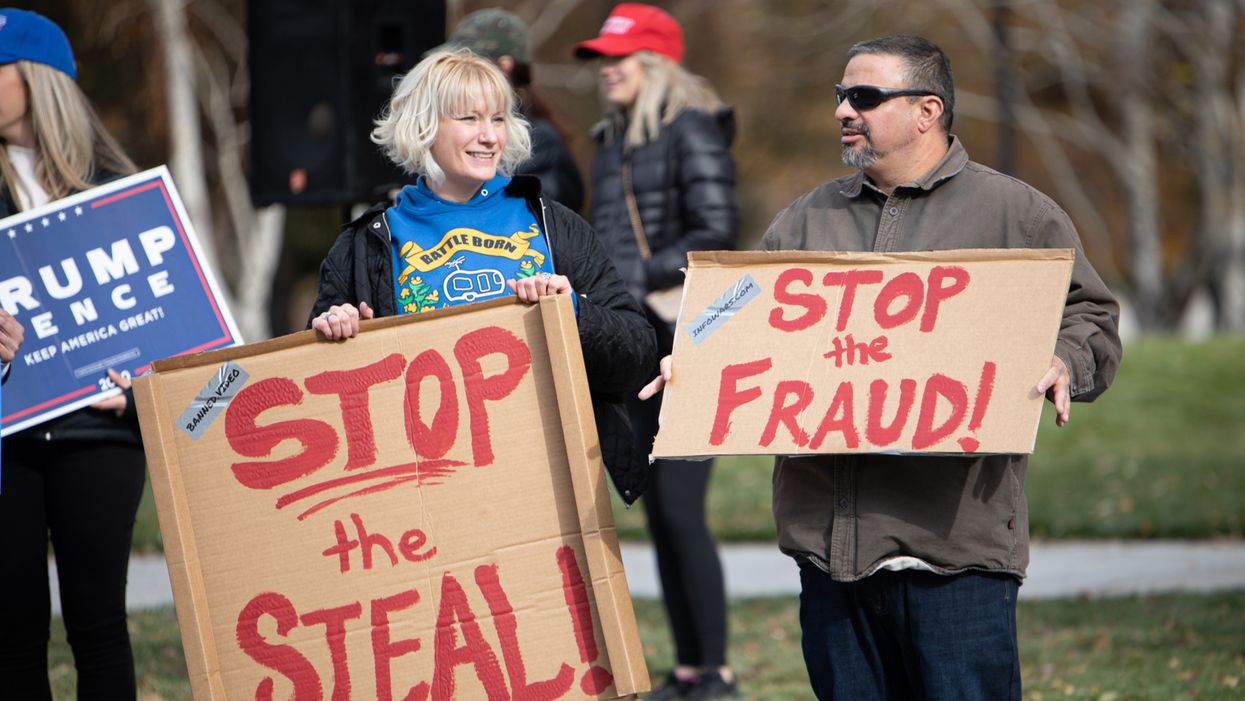 If you have been horrified by Donald Trump's post-election napalming of American democracy, the idea of now accommodating Republicans – many of whom looked on in cowed silence – in terms of how we run elections in this country may seem repugnant. But that's exactly what Democrats should do: cut a deal on voting reform with the likely-Republican Senate. Even if it's painful. Even if it means accepting Republican priorities that are anathema to Democrats.

But before casting me out of the Democratic coalition, hear me out.

The American Spectator's Matt Mayer recently suggested four reforms that Republicans could accept, and should demand. One is a standard early in-person voting window in the two weeks leading up to Election Day, including weekends. The second (in exchange for the first) is getting rid of mail-in voting. Third is universal photo identification requirements (paired with ensuring that everyone gets a form of ID, and lenient rules like allowing smartphone selfies to count). Fourth is requiring uniform voter roll cleanup procedures (i.e., "purging") across states. Overlaying all of this – and this is key – reforms should be standardized, implemented by Congress, and "instituted and paid for by federal funds."

There are three compelling reasons for Democrats to try to work with this. First, a compromise built around this framework would actually improve overall voting access on balance, especially for disenfranchised groups. Second, it would strengthen Democrats' electoral prospects – although Republicans would have a political interest too. Third, and most important, it could save American democracy.

A deal built on this framework would significantly improve on the situation today. For all the attention that voter ID laws get, it is not any single barrier that plays the villain in the suppression story. As in Murder on the Orient Express (spoiler alert), lots of culprits are working together. There are around 10,500 different election systems in this country. Each presents a unique web of challenges from underfunded election administration, a paucity of voting locations, difficult registration processes, and in some cases, a single in-person Election Day.

While voter ID laws and registration purges are the cherry on that bad sundae, they are just a part of that bigger picture. They also vary a great deal. 36 states have laws requiring some form of voter identification, but 17 of them accept non-photo ID, and 12 demand a photo but with a fallback option (like signing an affidavit). Voter purge methods also vary wildly from state to state—and sometimes even from year to year depending on who's in office.

The point is that today, the only limit on how severe a state's identification and purging practices are – and they are often very limiting for poor, Black voters' access particularly – is how hard Republican elected officials have pushed them. And with Democrats losing ground in statehouses, the situation is probably going to worsen.

That's why a deal predicated on the Mayer proposal, with some Democratic refinements (Democrats hold the presidency and the House, they are not supplicants here), would be a step forward. Creating a federal elections agency to ensure uniform and generous approaches to early voting for everyone would start to cut through the thicket of barriers that plague voters, increase turnout, and particularly benefit Black voters.

And while curtailing mail-in voting in exchange would seem hard to swallow (there would have to be exceptions: the five states that conduct all-mail elections—and any others that wanted to go that route in the future--overseas and military ballots and people medically unable to travel), it's actually a more-than-fair trade to get more early voting. Mail-in voting is just not that great: according to the ACLU, rejected ballots are concentrated among "people with disabilities, trans and gender-nonconforming people, women, people for whom English is a second language, and military personnel," and polling shows that two-thirds of Black and Latino voters still prefer to vote in-person. And it's the spark for lawsuits, postal delay disputes, and confusion.

In addition, a standardized, federally-mandated approach on IDs that aggressively works to get them to everybody, on the federal dime, and with creative, inclusive standards on acceptable photos, would take matters out of the hands of the most aggressive Republican activists and improve access in the most restrictive states. The same goes for a more standard, federally-overseen process for cleaning up voter rolls, especially if it involved state information exchanges like the Electronic Registration Information Center that rationalize the process. These reforms would get rid of the most egregious disenfranchisement, while having one set of rules and standards would make it far more straightforward for voting advocates to help voters navigate the system.

Some will argue that, because in-person voter fraud is a rarity that Republicans use to justify voting restrictions that give them an advantage, Democrats shouldn't accede to any of this. But we have to deal with the world not as we wish it was, but as it is. Today, limiting voter access – often verging on outright suppression – is the reality. This kind of compromise would stop the increasing restrictions that are almost certainly coming in GOP-controlled states, and actually improve access, especially for the most frequently disenfranchised voters.

The post-election debacle was a low point in the history of Republican claims about voter fraud, ranging from the clownish (think Giuliani in front of Four Seasons Landscaping) to the dangerous (see Trump and the Wayne County elections board). But none of this is going away on January 20. More than half of Republicans believe that Trump's victory was stolen from him. Republican leaders who have long seen the fraud trope as a helpful base motivation tool are already looking forward to more of it. It's a proven winner with their voters, and may be the best way to keep engaging Trump supporters when he is no longer on the ballot.

So the right will keep returning to this well. And it will probably work, at least with their base. Democrats can't stop it by repeating facts – debunking does not end conspiracy theories. The best way to defend against this political weapon is to unload it. We need to get both parties to have a stake in defending the integrity and fairness of the system, because both had a genuine hand in crafting it. Republicans need to have skin in the game.

Of course, this might be where this argument falls apart – after all, if Republicans have such a potent political tool, why give it up? But there are two reasons they just might. One is that not all Republicans are as cynical as many people think – some of them genuinely believe in these voting reforms in principle (I've seen it with my own eyes working both in Congress and a state legislature). The second is that Republican leaders know that in Donald Trump, they have grabbed the wolf by the ears. Trump's appeal served Republicans well in 2016 (non-Trump Republicans succeeded despite him in 2020), but party leaders don't want to be yoked to Trumpism forever. And constant, entirely baseless claims of voter fraud have now become inexorably tied to Trump. A package of election reforms that genuinely reflects Republican priorities would allow them to retake ownership of the issue and start to sever that connection. Republican leaders want to turn that page.

Even if it comes up short, the downside risk for Democrats trying is minimal. With Republicans tilting so hard on fraud rhetoric, an attempt to craft a bipartisan initiative would put hypocrites in a tough position, and even if it succeeded only in smaller pieces (such as setting a uniform early voting window with federal support, or setting a floor on voter ID laws), voters would benefit.

Most importantly, coming to some sort of accommodation on this issue would help protect our fraying democracy. A situation in which one of our two major political parties is incentivized to undermine voters' belief in our elections – and in which a significant portion of our country truly believes that the results are illegitimate – is destabilizing and dangerous. We're seeing that play out right now.

Few appreciate just how close to the edge we have come. Months ago, I argued that to avoid a meltdown of our democracy, Joe Biden needed to win by three states' worth of Electoral Votes or more. That turned out to be critical: if the margin had been one state – or if Trump and his "legal team" were not so incompetent – we would still be neck deep in the muck, and might not have found our way out at all. And we may not be so lucky next time. A better organized effort in a close election by a less repulsive and clownish figure might well result in a genuine constitutional meltdown, or a soft coup d'état.

Democrats cannot simply wave this off. So far, their basic rhetorical strategy has been a version of the My Cousin Vinny line – everything "those guys" say is BS. But looking at the state of voter access in America, the vast numbers of Americans who believe the fraud story, Republican momentum in state legislatures (with redistricting looming) and the susceptibility of the entire American election system to an intractable standoff, it is clear that this strategy is not working.

It is time to do something different. The best thing for voters, for Democrats, for Republicans, and for American democracy is to start to take this issue off the table. It may be a bitter pill, but it is necessary medicine.