Call Trump's treasonous acts what they are 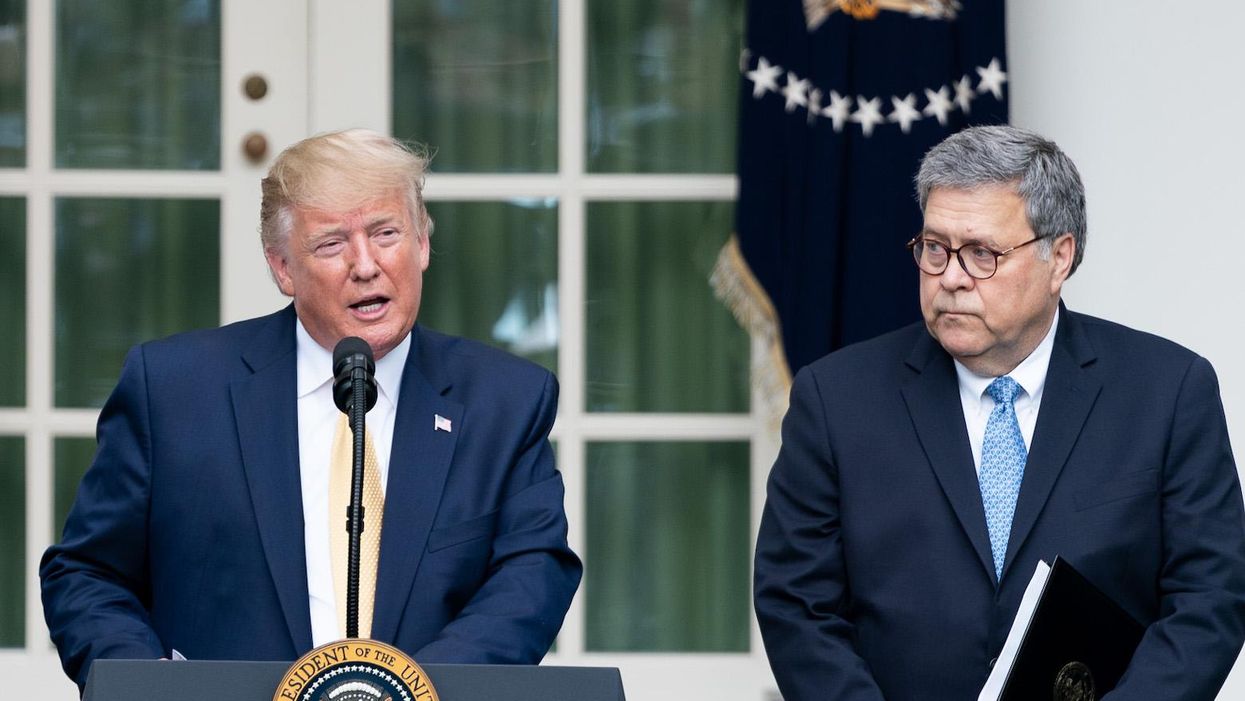 A Trump aide was banned from the Justice Department for pressuring staff for info on ongoing cases: report
President Donald J. Trump, joined by Secretary of Commerce Wilbur Ross and U.S. Attorney General William Barr, delivers remarks Thursday, July 11, 2019, in the Rose Garden of the White House to announce he will issue an Executive Order ordering every department and agency in the federal government to provide the Department of Commerce with all requested records regarding the number of citizens and non-citizens in our country. (Official White House Photo by Shealah Craighead)
John Stoehr, The Editorial Board
December 08, 2020

There's one thing I can rely on when I write about the president, the Republicans and their treasonable rhetoric and behavior. Like clockwork, a liberal reader will respond, saying isn't, in fact, treason. It's something else, perhaps disloyalty or sedition. The US Constitution is clear about treason's meaning. I should be more careful with my words.

Fair enough, but also fair is saying liberals are quick to doubt themselves. They are ready to compromise even when the Republicans hold compromise in contempt. They are prepared to appease authoritarians, because mild appeasement costs less than bold confrontation. To liberals, partisanship is the problem, not the solution. They refuse, therefore, even when refusing means failing to take their own side in a good fight.

If anyone represents the liberal view in this regard, it's Barack Obama. The former president said recently that, to effect real change, activists must meet people "where they are." That might be fine and dandy when it comes to police reform, but what if "where they are" is taking the side of a president seeking to overturn a lawful election? What if "where they are" is the Republicans saying and doing things with the express intent of harming the republic, because harming the republic tightens their grip on power? What if Republican dominance is predicated on betrayal? Partisanship is, therefore, not the problem. Asymmetry is. Symmetrical partisanship is the solution.

Donald Trump has moved from demanding in secret that election officials break the law to doing so out in the open. He's violating his oath of office, profaning the rule of law and pissing on the spirit of the Constitution. The Democrats could try impeaching and removing him again. But, in my view, they don't have to go that far. What they should do is point out the obvious for everyone's sake—that the president's words and deeds are treasonable. Anyone standing by his side is complicit. To my knowledge, no Democrat in the US Congress has dared use the T-word. It's long past time to dare.

Mounting a rhetorical offensive won't be easy. For one thing, the Democrats are usually on the receiving end of such accusations. Because many Democrats have experienced the pain of being accused of disloyalty, they'll likely hesitate to accuse Republicans of the same. For another, the Democrats will worry about members of the Washington press corps reporting "both sides." The president has frequently accused the Democrats of treason. They don't want to be seen as meeting tit with tat.

This more than anything else is why some liberals are making a fetish of treason's constitutional definition. If Republican behavior does not rise to the highest possible standard, why should the Democrats join the Republicans in the partisan gutter? What's the point given that Joe Biden will be inaugurated in 44 days anyway?

First, this isn't the gutter. This is the most basic principle of being an American. Elections are sacred or we invite a master to rule us. Second, while the Republicans are busy siding with Trump, real people are dying. Nearly 290,000 are dead from the covid plague. The death toll may be 345,000, according to a Times analysis. Twelve million people are about to lose unemployment insurance. Trump doesn't care. The GOP seems indifferent. The republic's injury isn't just constitutional, legal or even moral. It's literal. (Only 25 Republicans say Biden won the election, according to the Post.)

Third, on a more practical note, the Democrats, in failing to accuse the Republicans of disloyalty, are failing to give Americans a choice: Power over country or country over power? Are you partisan for a party or partisan for the country? The Republicans have chosen the former two for the last four years. They hope everyone forgets that after Trump is gone. They hope to return to principle in order to oppose Joe Biden. The Democrats, however, have a role to play—the role of never letting anyone forget.

The Democrats keep appeasing authoritarianism, because it's cheaper than facing it head-on. Under a fascist president, the Republicans altogether stopped appeasing democracy. They faced it head-on without cost. Indeed, they got most everything they wanted without having to continue with a phony flag-hugging charade. Their true nature was revealed, true character exposed. Now they want their principles back.

They can't have them.