How Donald Trump's insatiable hunger for more bilked the US government for $2.5 billion 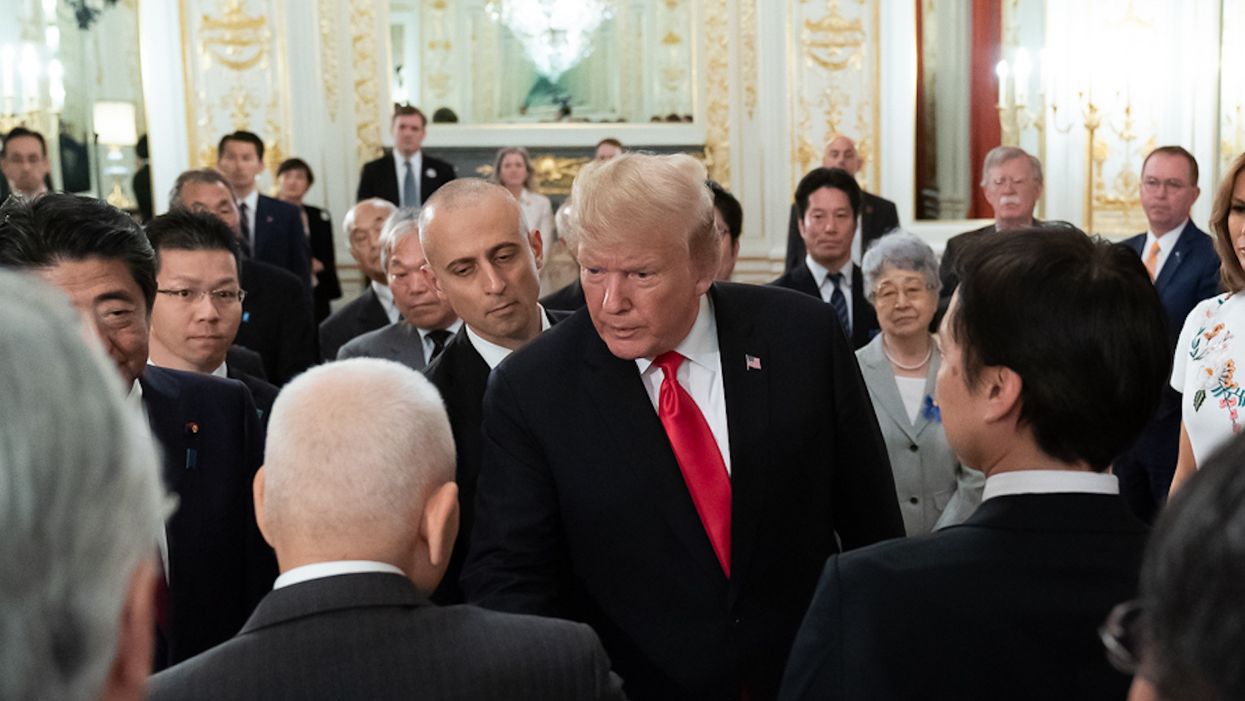 That's how much Trump charged the federal government for a glass of water in April of 2018 when he and Japanese Prime Minister Shinzo Abe met at Trump's Mar-a-Lago resort in Florida. According to the Washington Post, Trump's company also charged the government "$13,700 for guest rooms, $16,500 for food and wine and $6,000 for the roses and other floral arrangements," over the two days he held meetings with Abe at the resort. But one day, Trump was scheduled to meet with Abe without aides and advisers, with no meal service or cocktails or any other celebratory nonsense. Just the two leaders, alone in a room, talking. According to the Post, the bill for that day contained a line item reading, "Bilateral meeting. Water. $3.00 each."

Donald Trump has been paid "at least $2.5 million by the U.S. government," since taking office, according to official documents obtained by the Post. Trump has made more than 280 visits to his own hotels and golf clubs over the last four years, and the payments covered costs for "hotel rooms, ballrooms, cottages, rental houses, golf carts, votive candles, floating candles, candelabras, furniture moving, resort fees, decorative palm trees, strip steak, chocolate cake, breakfast buffets, $88 bottles of wine and $1,000 worth of liquor for White House aides." according to the Post.

And water. A total of six bucks for water, no charge being too small to make it onto a bill to the government for a payment going straight into the pocket of the man who owns the Trump Organization and everything it comprises, including his resort in Palm Beach.

It's apparently a good part of what the Trump base likes about him — his appetites, his pure, unadulterated, money-grubbing-right-down-to-$3-for-water greed. Trump has wanted more his entire life. He wants more money, of course. He has spent a lifetime in pursuit of more money, and then some more, and more and more. He borrowed so much money in pursuit of even more money that it drove him into bankruptcy, several bankruptcies in fact. Today, as president, he is said to be in debt for nearly $1 billion to banks and other lenders, a debt that will come due within the next few years, according to the New York Times and other reports.

Trump wants more fame, a drive that started off with mentions in gossip columns like the New York Post's "Page Six," during the years he was coming into his own as a builder in New York City. He used to call gossip columnists and plant items about himself, posing as a PR person, and then he would call the columnists the next day and comment on their mention of him in order to gain yet another column inch or two in the tabloids. Some said he ran for president back in 2016 to "burnish his brand," to achieve even more fame and use it to make even more money. Since he became president, he has been relentless in his pursuit of attention, tweeting at all hours, criticizing cable networks who don't give him enough coverage, calling in to shows like "Fox & Friends" and "Hannity" both to reward them for the coverage they've already given him, and to get more coverage.

He wants more women, from wife No. 1, Ivana, when he was just starting out, to wife No. 2, Marla Maples, after he jettisoned Ivana, and now wife No. 3, Melania, who replaced No. 2 when he determined she had a few too many miles on her. And then there were all the women in between, in and among his marriages, the women he groped on airplanes and at bars and during parties, the women he (allegedly) raped in places like a Bergdorf's dressing room or a hotel room or a bathroom during a party, the women whose mouths he forced his tongue down, the women he pushed up against walls and pressed himself against, the women whose bodies he commented on in offices or across rooms, the women whose skirts he put his hand up at restaurant tables, the women whose breasts he grabbed at tennis tournaments and beauty pageants, the women whose rear ends he grabbed in green rooms before television show tapings, the women he dragged behind curtains at New Year's Eve parties and forcibly kissed and groped. All of those women. Trump wanted their bodies and their mouths and he took them without asking permission because he was Donald Trump, and he took what he wanted.

He wanted more golf, so he played more golf more frequently than any president before him. He wanted so much golf that he went around the world buying and building his own golf courses, and then he played them, because he owned them, and because he owned the golf carts, as president he could charge the government for his own Secret Service agents. He could even charge the government for the hotel rooms the agents stayed in while they protected him. He charged the government $17,000 a month for a cottage at his Bedminster, New Jersey, golf course, which the Secret Service had to rent month after month just in case he had a mind to play a round of golf.

Trump wants more adulation, more love from the "base," and when he feels he isn't getting enough, he tweets. There aren't enough hours in the day for Donald Trump. He was up at 3 a.m. this week, tweeting about the Supreme Court, the court to which he has appointed three arch-conservative justices, yelling at them for their recent decisions allowing mail-in votes to be counted after Election Day, because of course, he wants more votes. He's been up at 3 a.m. tweeting before, taunting a Miss Universe contestant for a "sex tape," taunting CNN as "low rated," bragging about his debate performance, yelling at polls that show him losing.

And now Trump is making his final campaign swing through the "battleground states," feeding the insatiable need of his base for more of himself. "Four more years" has become "12 more years." Somehow Trump is owed more years of the presidency because "they" took two or three years away from him during the Russia investigation, because "they" spied on his 2016 campaign, because "they" don't deserve to win. The red-hat-wearing mobs of un-masked fans at his rallies want more of the America they think Trump is bringing back to them. It's an America that is more white, has more guns, has more churches, more of "us," less of "them."

That's what they like about him. They want it all, the same way he does. That's what opposition to affirmative action has always been. They don't want some of the college admissions, they want them all. That's what Shelby County v. Holder was about, that's what voter IDs and all the restrictive rules about voting by mail are about. They want all the votes.

For the Trump base, making America great again means making America ours again, but he's going to make sure he puts it on their tab, right there with $3 for water and $546 for rooms and $50 for decorative palm trees for table decorations and $1,005.60 for 26 servings of Patron and Don Julio tequila, 22 Chopin vodkas, and six glasses of Woodford Reserve bourbon consumed by White House staffers at the Mar-a-Lago bar. It's going to cost us more than votes to get our country back. We're going to be paying for Trump's insatiable greed long after he's gone. More than 228,000 of us have already paid with our lives. If the Friday totals keep up — 98,500 new cases and more than 900 dead — a half million of us may perish by the time Trump walks out of the White House for the last time.