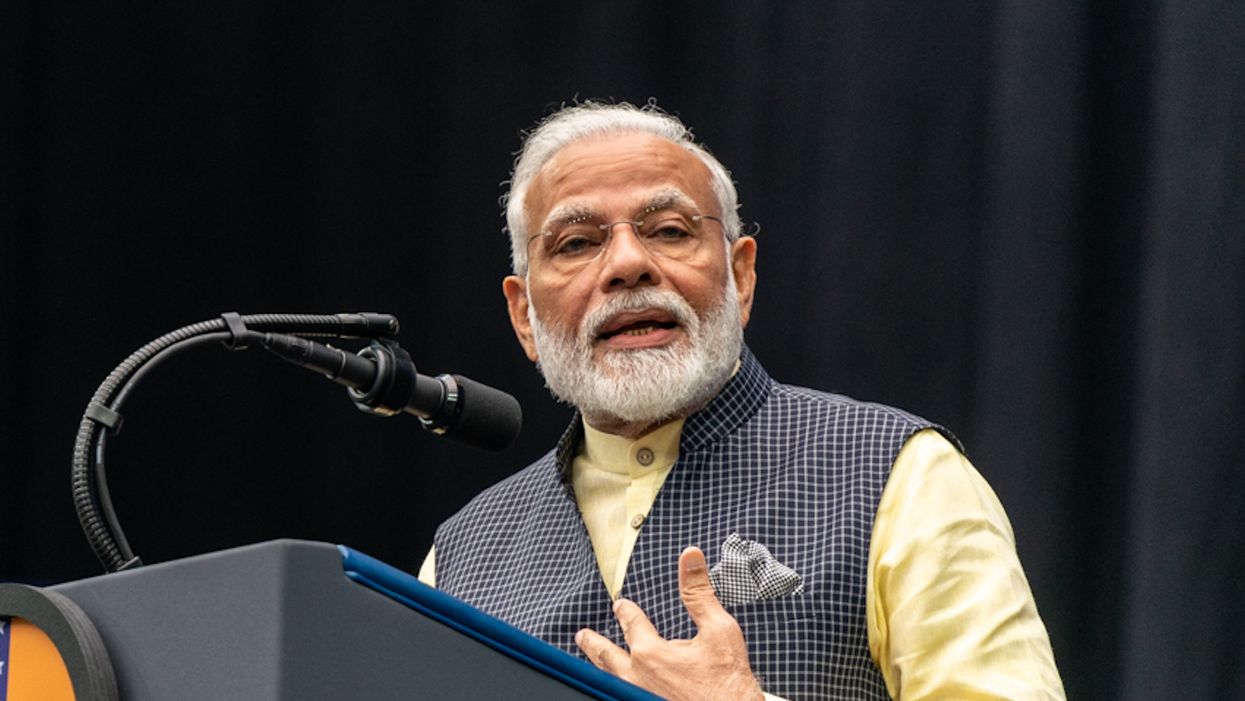 Prime Minister Narendra Modi of India addresses his remarks on stage Sunday, Sept. 22, 2019, at a rally in honor of Prime Minister Modi at NRG Stadium in Houston, Texas. (Official White House Photo by Shealah Craighead)
How the privatization of medicine in India is accelerating its COVID-19 death toll
Yogesh Jain
November 30, 2020

Spiraling health care expenses in India have been pushing more than 55 million Indians into a state of abject poverty every year. COVID-19 has only worsened the trend for even more families—like Aghan Singh's.

To ensure that his sick mother received the best treatment, Singh, a self-employed motor mechanic in the small town of Bilaspur, in Chhattisgarh, India, decided to take her to a popular private hospital nearby. She had been running a fever since July 7 and had also developed breathlessness by July 9. Singh rushed her to the hospital, and when they reached the emergency department around 8 p.m., her oxygen levels were dangerously low. The hospital ordered a battery of tests for COVID-19 and quickly admitted her to an intensive care unit to give her oxygen and medicine. In the first eight hours of his mother being admitted to the hospital, Singh deposited Rs 34,000 ($455) and then paid another Rs 1,96,000 ($2,627) over the next four days. To arrange money for his mother's treatment, Singh had to sell off two and a half acres of land that he owned in his native village. Despite all his efforts, his mother's condition worsened progressively, and she died on July 16. While still grieving the loss of his beloved mother, he was further stressed about how his family would survive the next month with most of his resources having been exhausted during his mother's treatment.

Also in the state of Chhattisgarh, when 60-year-old Savani Bai from the village of Dhanokhar developed mild symptoms of COVID-19, she spoke to a doctor on the state helpline and was advised to go to the hospital. Since all the government hospital beds were occupied, she had to be admitted to the same private hospital in Bilaspur as Singh's mother, where she was admitted to a general COVID ward. During her 10-day hospitalization, she was given acetaminophen and was kept under daily observation to ensure her condition was not worsening. For this basic treatment, she ended up spending Rs 85,000 ($1,137) and had to mortgage her one-acre farm to meet her hospital expenses.

"I took my mother to a private hospital near my home because it is cleaner and they admit patients swiftly throughout the day," Singh said. Due to inadequate funding and monitoring of quality control in public hospitals, a large number of people in India are being forced to go to private hospitals for both outpatient, and to a lesser extent, inpatient care. It is a cruel joke that such a move to seek treatment in private hospitals by people is seen as a 'choice' rather than a compulsion.

India, which is the "second worst-hit country behind the United States," has been fighting the COVID-19 pandemic with a fragile health system. The country saw one of the most draconian lockdowns anywhere in March, leading to a sense of panic and causing many private hospitals to simply shut up shop or turn away patients during the lockdown period. "I am 59 years old and [have been taking medication] for diabetes and hypertension for 10 years now—how could I expose myself to the risk of COVID? So I shut my hospital completely when [Indian Prime Minister Narendra Modi] announced the lockdown, and reopened [the hospital] three months later," said Ajay Chandrakar, the doctor who owns the hospital to which Singh took his mother. As a result, the avenues for seeking health care in India during a pandemic-induced lockdown were limited to the inadequate public systems. And the private hospitals that left citizens in the lurch went unquestioned and unpunished by India's national and state governments.

In fact, this was an opportunity for the public systems to recapture their rightful position as the predominant health care providers in the country. But the public systems were unprepared for the task. There was hardly any increased funding by the center and state governments to build up the capacity of the public health care system in the country to provide treatment and care for the increasing numbers of patients during the pandemic. Instead, there was "a worrying disruption in India's basic health services in March as local administrations focused on containing the spread of COVID-19," reports Mint, using data provided by the National Health Mission.

Dr. Gajanan Phutke at the district hospital in Bilaspur said, "I am worried that more than 50 percent of my tuberculosis patients did not return for their drug refills in August, and I don't know if they are still alive or not. … Immunization rates have also dropped by 50 percent in our health service," lamented the doctor.

Private providers are able to make massive profits by charging patients exorbitantly—and national and state governments aren't stopping them. Xavier Minz, who runs the largest private lab in Bilaspur, said, "It is time for me to make good on the losses I suffered when most hospitals were shut [during the lockdown in March]. I got permission to do the COVID Real-Time PCR lab [test] and can charge Rs 3,800 ($51) against my expenses of Rs 1,100 ($14) for a single test."

Hospitalization and, in particular, intensive care are where private health systems make their major profits. These profits translate into patients incurring catastrophic health expenditure. Private hospitals continue to profiteer during the pandemic by the same methods they used before it—by massively inflating bills for daily bed charges and intensive care.

India has been actively promoting privatization in various social services including in health care for the last 30 years. Private-public partnership (PPP) has been one of the most common models for allowing private systems to perform a task previously done by the public systems while having the state pay for such operations. In India, physicians working with public hospitals are allowed to practice outside their place of employment and treat patients for a fee. "I took my mother to a private hospital owned by Dr. Chandrakar, who is the best doctor in my town and [has worked] in the dharam hospital [government hospitals are called dharam, which means righteous or moral] for the last 25 years." The PPP system makes it tempting for doctors working in public hospitals to compromise their commitment to their primary role of providing care in the public system. Now in the time of the pandemic, when an acute shortage of doctors and nurses looms large, states still allow their staff to practice privately, causing this chronic problem to become worse.

Back at home after recovering from COVID, Savani Bai cursed herself on her way to work at her farm—which had been mortgaged for her treatment—wondering why she had not demanded that the packed government hospital make space for her too when she required it. Aghan Singh only blamed it on his karma, while trying to come to terms with his bleak future.