America needs a 'coalition of the decent' out in the streets 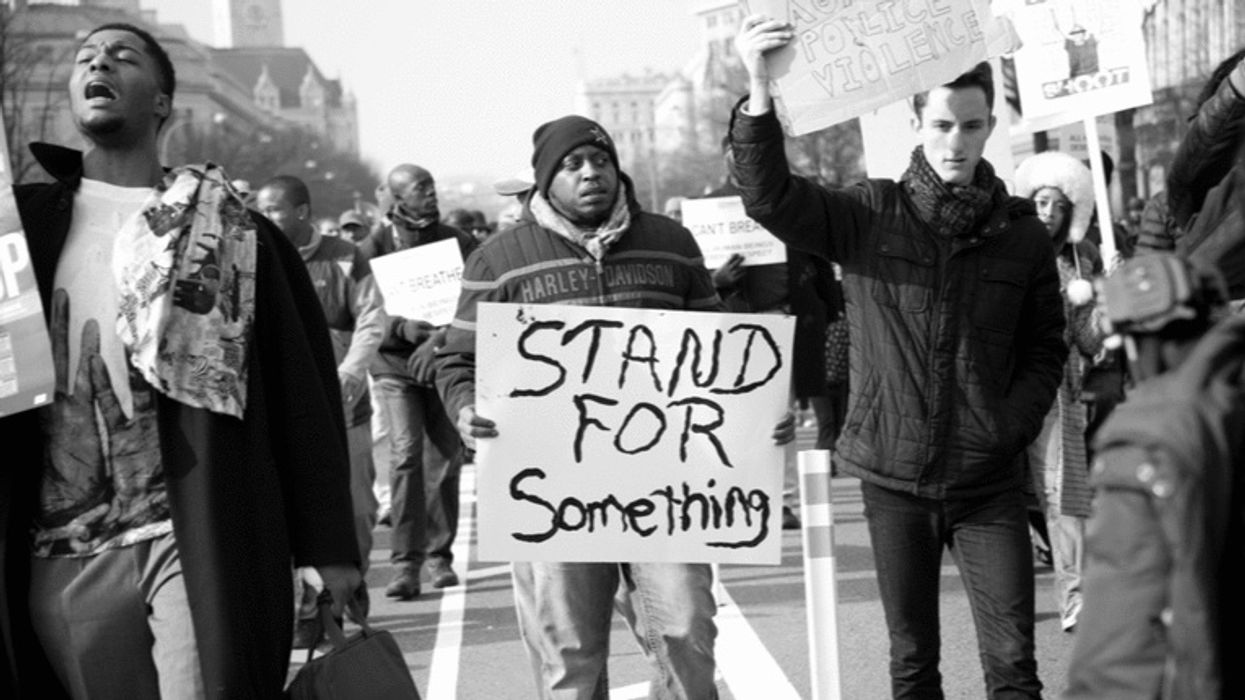 WASHINGTON: Protesters march against police shootings and racism during a rally in Washington, DC on December 13, 2014

On September 21, Refuse Fascism marked the grim milestone of 200,000 COVID deaths with marches against Death, Lies, and Fascism. At the Chicago rally, Joshua Shanes, a professor of Jewish Studies, made a moving speech drawing parallels between early Nazi Germany and Trump's America.

He quoted from the historian William Sheridan Allen's The Nazi Seizure of Power, a microstudy of the town of Northeim: "What was needed in Northeim to stop the Nazis was a political coalition of decent people, regardless of party, to recognize that - whatever it promised - Nazism was an indecent thing. That such a coalition never developed was the main reason the Nazis got into power." Shanes concluded his speech by saying the right time to act is always "right now."

Only a few days passed between the shock of Trump's authoritarianism being on display at the first presidential debate and his Covid-19 diagnosis. Only a few days passed between people confronting what Trump represents when he told the Proud Boys and all of his white supremacist thugs to "Stand back and stand by," and hoping once again that he's not that dangerous, not that determined to hold on to power, not that much of a cruel sociopath that a direct experience with this pandemic wouldn't soften him a little.

Of course Trump came out of the hospital and revealed himself once again to be who he's always been, an unrelenting fascist, leading a party and movement of people filled with hatred and hunger for violence, tearing up all the rules and declaring themselves to be the law, and willing to use any means to finish what Trump started – entrenching the unchallenged dominance of a white, male, Christian supremacist America. We are still in the midst of a rolling coup, with active sabotage of people's right and ability to vote as Senate Majority Leader Mitch McConnell rams through Amy Coney Barrett's Supreme Court nomination to settle a contested election in his party's favor amid calls to violence should Trump lose.

This is on top of more than three years of the Trump regime declaring and carrying out their battles on many fronts – against immigrants, Black and brown people, women, LGBTQ people, the poor, the press, the Democrats – and against science and truth itself. Now we are at a point where the main mechanism people rely on to remove this regime from power—the franchise--is being incinerated.

Yet where is the outrage? Where is the passionate intensity to stop this nightmare? Where is the political coalition of the decent people, the large majority of the people in this country who refuse to accept these insults and injustices?

Some will argue that this coalition is represented by the Democratic Party, but is it? Biden told us at the debate that should Trump "win" the election, he will accept the results and so must we. As if all of their warnings about the danger Trump poses to democracy are not really true. Believe them enough to vote hard, but don't believe them enough to actually wage a massive struggle on a historic scale – the kind that was needed in 1930s Germany and needed even more now with the future of humanity and the planet hanging in the balance.

We know that the decent people are out there, in the millions. We hear the voices of people from many walks of life speaking out. And in June and July, we rose up to protest police murder and systemic white supremacy. But against this regime, the decent people have not cohered into a force that has shown the world we are the majority. Our majority has accepted the unacceptable, including a still skyrocketing death toll from COVID, and has barely lifted a finger to show our disgust and anger.

Where is the coalition of the decent people? If it's not in the public squares and not in the streets--non-violently standing up to a regime that has told you they will not abide by an election they lose--then we are going down the same path as the good Germans. History has never turned in favor of the people without people coming together and using their power of non-violent protest. Refusing to protest now, refusing to call every decent person into the streets now to demand the removal of a regime that destroyed countless lives and will destroy the world if we let them is already conceding to fascism.

Imagine non-violent protests that continue day after day, from now through the elections, united by one single demand: Trump and Pence Out Now. Imagine the millions who do not support Trump coming into the streets and public squares to stand together, masks on, to declare without equivocation that they will not be complicit on a road to fascist consolidation and will not stop protesting until the Trump Pence regime is removed from power. Just as we saw from the mass protests in June and July, the regime and their base become overwhelmed by our numbers and determination.

That kind of mass mobilization could lead timid Democrats and other powerful political actors who have thus far gone along with the regime to see that something must be done to stem the tide of protest and be compelled to meet our demand. It is this basic process that has driven out hated leaders all over the world in the recent past – in Egypt, South Korea, Armenia, Puerto Rico, Lebanon – and can and must be done here.

Through this process, we build up our numbers, unity, and resolve so that if the regime is not driven out by Election Day, we have a mighty force of people committed to continuing non-violent protests – a mass movement that will not allow whatever the regime tries to do to nullify, sabotage or steal the election. We have a mighty force of people who refuse to be taken down a road to conciliation, whether Trump wins or loses, and continues to grow and demand removal until they're driven out.

Refuse Fascism has begun this process, launching non-violent protests day after day to demand #TrumpPenceOutNow. We call on all with a heart for humanity to join us or start their own Out Now protests. It is long past time for everyone, everywhere, to form coalitions of the decent people and take to the streets to say enough is enough. A struggle for the future is underway. The right time to act is right now.