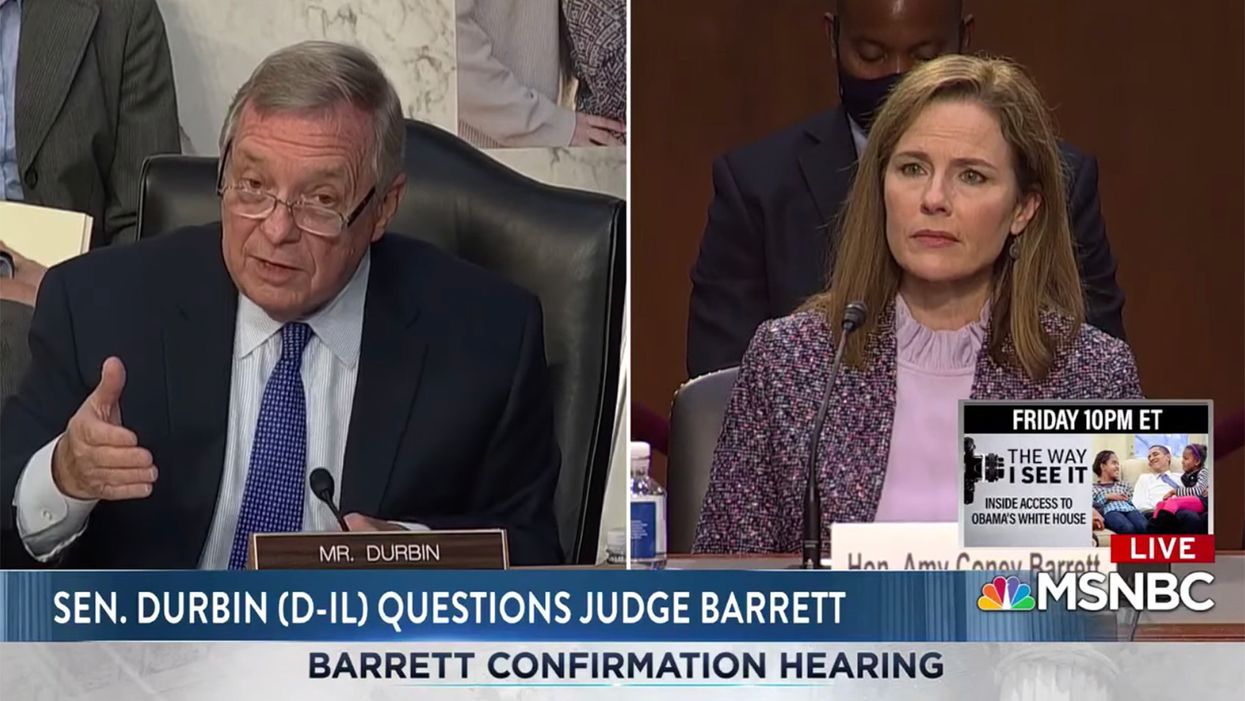 The Supreme Court nominee has repeatedly refused to say whether she believed the president had the right to change the election date, which the Constitution plainly states is the authority of Congress, and said she would have to consider the facts of any lawsuit brought to challenge such an order.

"I've given a response to every hypothetical that I've been asked in the hearings," Barrett told Durbin. "As I said yesterday, I do that regardless of whether it's easy or hard. I don't do that to try to — whether the question, I mean, would be easy or hard. I don't try to do that to signal, but because it would be inappropriate for me to make a comment, and I don't think I've answered any legal hypotheticals in keeping with the 'Justice [Ruth Bader] Ginsburg rule.'"

Durbin was less than satisfied with Barrett's explanation.

"I guess what troubles me is this," Durbin said. "You style yourself an originalist, textualist, factualist — whatever the term is — which means you go right to the words and try to understand the words in their original meaning. If I change Sen. [Dianne] Feinstein's question and didn't ask you if the president has the authority to unilaterally delay an election, asked you does the president have the right to deny a person a right to vote based on their race, what's your answer?"

Barrett told the senator that the Constitution prohibited the example he suggested.

"Obviously there are many laws in effect, including the Equal Protection Clause, which prohibits discrimination on the basis of race, including the 15th Amendment, which protects the right to vote against discrimination based on race," she said. "There's a principle and constitutional law called external constraints. Even if one evaluates what the authority a branch might have to act, there are external constraints from other parts of the Constitution. Here it's the 14th and 15th Amendments."

"Of course, the right of citizens of the United States to vote shall not be denied or abridged by the United States on the account of race," he agreed. "For a textualist, that is clear text as I see it, but when asked whether or not the president has any authority to unilaterally deny that right to vote for a person based on race or even gender, are you saying you can't answer that question?"

Barrett argued that she'd simply cited the constitutional amendments that addressed his question, and Durbin asked why she wouldn't do the same with the election delay issue that's also addressed by the Constitution.

"But whether a president can unilaterally deny, you're not going to answer yes or no?" he said.

"It strains originalism," Durbin said, "if the clear wording of the Constitution establishes a right and you will not acknowledge it."