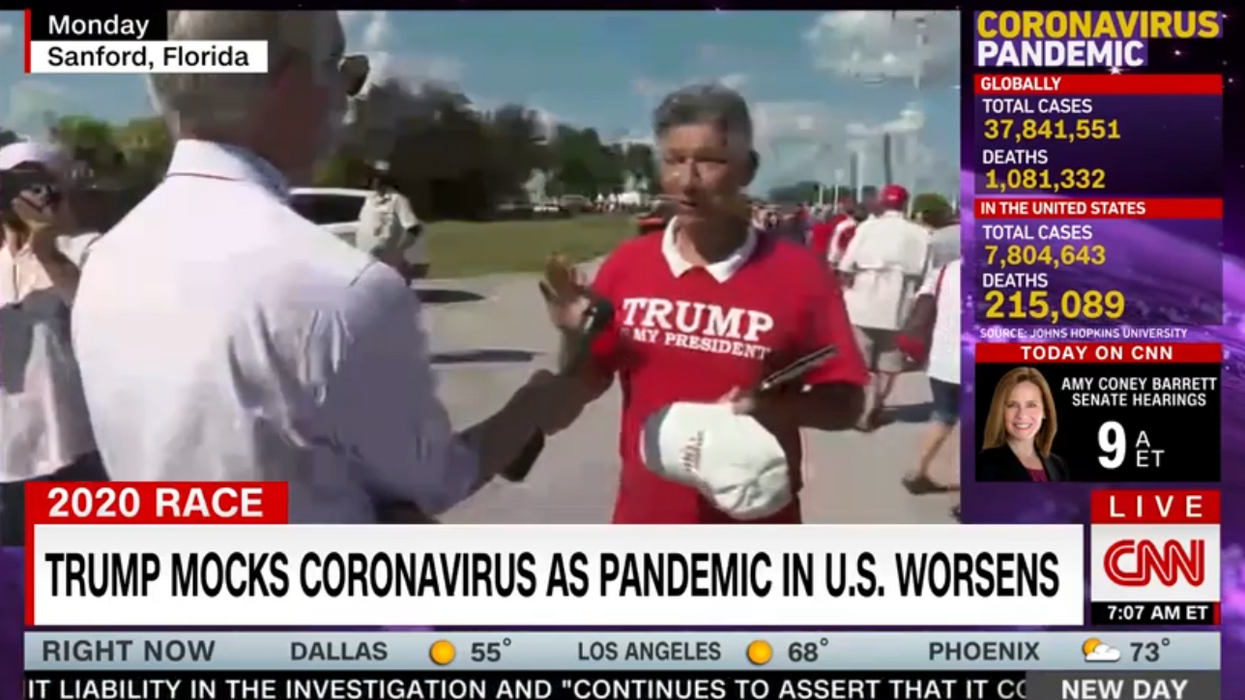 As President Donald Trump made his return to the campaign trail, so did his supporters — and many still appear to be unfazed by the president's battle with the coronavirus.

Despite the overwhelming number of reports highlighting details about the virus, its severity, explanations for how it spreads and evidence to confirm the spread, Trump supporters continue to ignore the science — and their actions at the president's rally were a glaring indication of their beliefs.

Tuchman hit the pavement in Sanford, FL, as he shared details about his observation of rallygoers. Although Trump tested positive for coronavirus and was hospitalized due to the severity of his case, his supporters still refuse to take it seriously.

"If you thought that people would be more careful at rallies after hearing that Donald Trump had coronavirus and there was a super spreading event at the White House, you would be incorrect," Tuchman said, leading off. "About 90% of people did not have masks. Every one had their temperatures checked and they were given hand sanitizer, and they were given masks and there was no mandate to wear them. Most of those masks were put in pockets and never came out again."

After Tuchman concluded his brief discussion with the first Trump supporter, he spoke with a woman who also dismissed the serious nature of the coronavirus outbreak as she insisted she is healthy with no underlying conditions.

"I am healthy, I have no underlying health issues. That seems to be the people that are most prone to get the disease," she said.

Tuchman pointed out that Trump was also considered healthy but he needed to be airlifted to Walter Reed Medical Center in Bethesda, MD. He also noted that Trump's recovery was likely due to the exclusive health care the president received —a type of health care most Americans could only dream of receiving.

"Trump was healthy too, though, and he had to take a helicopter to the hospital," Tuchman pointed out. "Do you have care that good?"

"No, but I take care of myself," the woman said.

Next, a rallygoer wearing a "Trump is my president" T-shirt falsely claimed that masks are actually a danger to the American public as he insisted masks are responsible for people fainting.

"People can faint because there is too much carbon dioxide going back in the system," the man said.

Tuckman also offered a hypothetical question for one of Trump's supporters. He asked her would she consider wearing masks if the president insisted it was safe. The woman admitted, "I would put it on." Despite Trump supporters being open to hearing him support mask-wearing, Tuchman noted he did no such thing on Monday night.

Hundreds of people gathered closely in the Florida airport hanger with no masks. During the rally, Trump continued with his dangerous rhetoric as he insisted he is now immune to the virus. As Trump continues to downplay the pandemic, more people are becoming infected with the virus as the death toll continues to rise.

More than 8 million coronavirus cases have now been reported in the United States. The death toll has also surpassed 210,000.