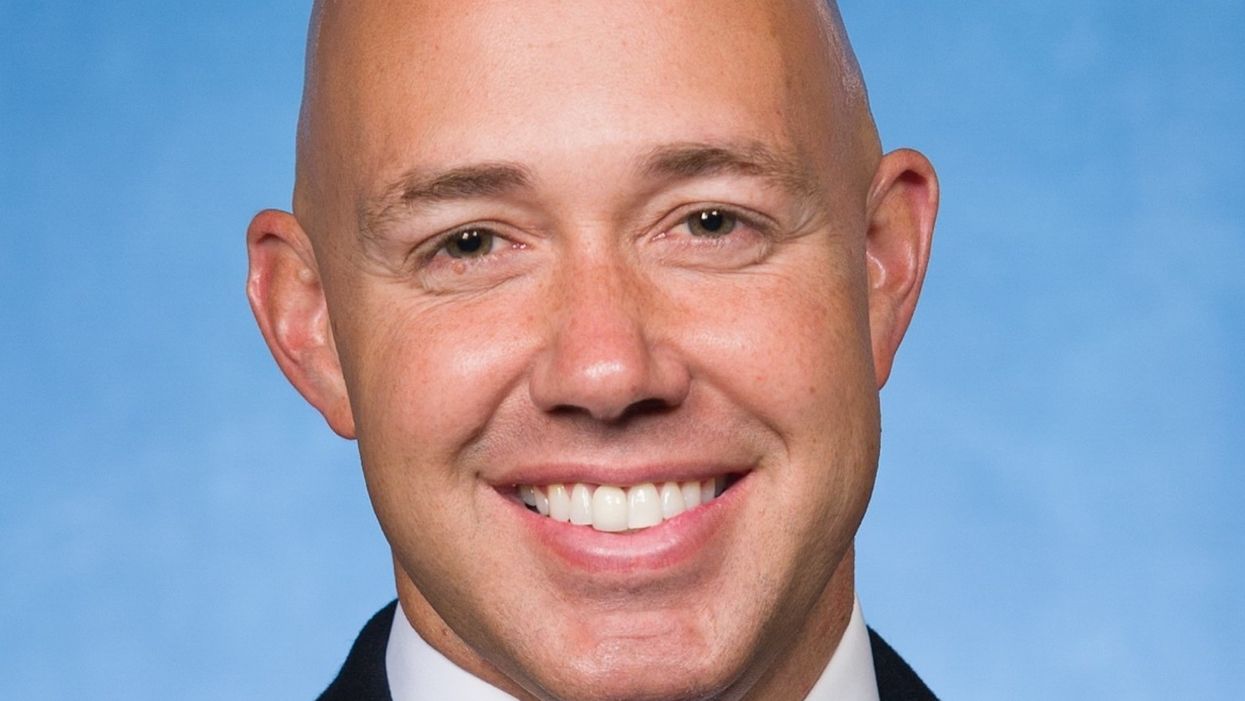 In Florida's 18th Congressional District, Democrat Pam Keith is running against two very undesirable alternatives: a far-right Republican incumbent who has joked about rape and a QAnon supporter who is a registered Republican but is running as an independent. And thanks to the congressman's rape joke, journalist Ryan Grim notes in The Intercept, the QAnon supporter stands to pick up some votes.

The GOP incumbent is Rep. Brian Mast. On August 27, the South Florida Sun Sentinel's Skyler Swisher reported that the congressman had "joked about rape and referenced sex with 15-year-old girls in old Facebook comments to a friend who is now his campaign manager." And Grim notes that Mast "apologized for the remarks this summer, saying he was ashamed of them and was striving to be a better man."

"Unfortunately for Mast," Grim explains, "an independent candidate on the ballot, K.W. Miller, is publicly associated with QAnon, and Mast's remarks could hardly have been better tuned to send the movement's supporters fleeing from him and toward Miller. In fact, Miller was the first to call for him to resign from Congress in the wake of the news of the comments, noted Sabra Ingeman, a spokesperson for Miller's campaign."

According to Ingeman, "As soon as the Sun Sentinel article came out, that night K.W. put up a video calling for his resignation — and then, a bunch of other groups piled on to that."

Miller has made no secret of his devotion to the QAnon conspiracy theory, which claims that the federal government has been infiltrated by an international cabal of child sex traffickers, Satanists and cannibals and that President Donald Trump was put in the White House to combat the cabal. According to QAnon, an anonymous figure named Q is providing online updates about Trump's battle against the cabal.

QAnon also believes that R&B superstar Beyoncé, who rose to fame in the 1990s as a member of the female vocal group Destiny's Child before launching a solo career, is part of the conspiracy and that she isn't really African-American, but rather, is really an Italian woman named Ann Marie Lastrassi. Beyoncé, QAnon claims, is working closely with billionaire Democrat George Soros. And on July 4, Miller posted, "Beyoncé is not even African American. She is faking this for exposure. Her real name is Ann Marie Lastrassi. She is Italian. This is all part of the Soros Deep State agenda for the Black Lives Matter movement. BEYONCÉ YOU ARE ON NOTICE!"

Miller's critics have rightly dismissed him as a kook. But as Grim notes, his campaign is benefitting from the controversy over Mast's rape joke. And in Florida's 18th Congressional District, Grim notes, Republicans typically "have the upper hand."

Keith, like Miller, has slammed Mast for his rape joke. Grim explains, "Mast's Democratic opponent, veteran Pam Keith, has also hammered Mast on the comments, running a 30-second ad that displays his Facebook posts next to an image of the late Jeffrey Epstein, the infamous former Palm Beach resident at the center of a global child sex-trafficking ring. 'No. Those aren't the words of this convicted sexual predator,' the ad intones. 'They're the words of disgraced Congressman Brian Mast. Disgusting. Dishonorable.'"

If Miller takes enough votes away from Mast, could he become enough of a spoiler to give Keith a victory? If the alternatives are someone who tells rape jokes or an unhinged QAnon conspiracy theorist, could a Democrat pull off a victory in a GOP-leaning district?

Grim observes, "Polls have (former Vice President Joe) Biden and Trump neck and neck in the district, though Hillary Clinton lost it in 2016 to Trump by 9 percentage points…. A poll in mid-September found Mast up 8 points over Keith. A recent internal poll released by Keith posited a 2-point lead for the Democrat, with Miller drawing 4%."