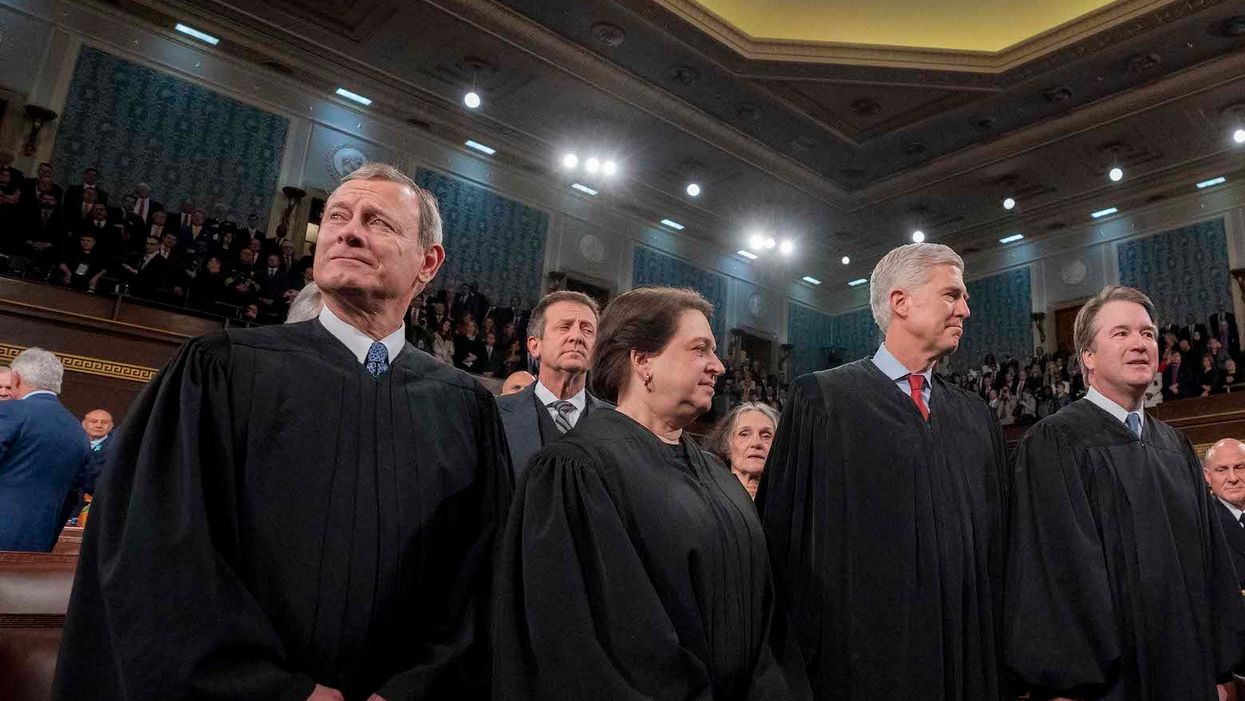 I'm tired. I'm sure you are, too. The upside is there's only five days to go until Election Day. The downside is those five days are going to age all of us by a decade. Making the hours crawl by even more is a series of federal court cases making it clear that Republican jurists are inventing law to stop citizens from voting or to invalidate their votes. There may be a time, perhaps sooner than you think, for unorthodox politics.

When it comes to legal theory, I defer to authorities (here, here and here). Correct me if I'm wrong, but this is how I see things. "Conservative" federal jurists (note the quotes) are sticking their noses where they don't belong. It's one thing for them to overturn a state law violating the US Constitution. It's another to overturn a state Supreme Court's interpretation of state law according to that state's constitution. That's what happened with Pennsylvania, North Carolina and Minnesota. "Conservative" jurists, including five sitting on the US Supreme Court, overruled court-ordered extensions of mail-in deadlines. My friend, if this looks like a betrayal of conservatism, that's because it is.

It gets worse. Justices appeared to accept as true a jaw-dropping lie, which is that tinkering with election deadlines somehow compromises the integrity of the vote. The extensions, of course, are entirely reasonable. We are smack in the middle of a covid pandemic. More than 234,000 Americans are dead. Infections are spiking, especially in rural and swing states. (There were 88,521 new cases Thursday alone, according to data from Johns Hopkins.) Easing deadlines is what you'd expect from state officials honoring the letter and the spirit of their state constitutions. Yet Justice Neil Gorsuch questioned whether the pandemic were a true "natural disaster" (a criteria for extensions). Justice Samuel Alito said Pennsylvania's election will be "conducted under a cloud." Officials should, therefore, throw away votes received after Election Day.

What's going on seems pretty straightforward. The president has been yammering nonstop about "voter fraud." It's the only thing, Donald Trump says, that will make him lose to Joe Biden. The only outcome he will accept, therefore, is victory. This is not only extortion (vote for me or say goodbye to a peaceful transfer of power), it is extortion based on a whopper. Voter fraud on the scale he suggests is fictional. When it happens, it's in dribs and drabs, not anywhere close to wholesale. (When it happens, it's often Republican voters committing the crime.) And yet the president keeps lying, and now, evidently, Republican jurists are listening. By accepting as true a categorical falsehood, they make the lie real. (Their rulings, after all, constitute the common law.) By overturning a state court's interpretation of state law, they push the Big Lie all the way down to the level of local affairs. Dear Leader's Big Lie is everyone else's Big Reality. My friend, if this looks like what authoritarians do, that's because it is.

Some might look at this and despair. Don't. There's plenty we can do. This is a time for unorthodox politics, creative thinking, and moral guts. For me, I'd suggest Democratic secretaries of states (the elected officials ultimately responsible for elections in their states) ignore federal court orders. Keep counting votes pursuant to state election law or state court rulings. Count the votes as a form of civil disobedience. Count the votes as an expression of patriotism. Count the votes in order to honor the obligations of elected officials to state residents. Count the votes in defense of states rights. North Carolina, Pennsylvania and Minnesota all have Democratic secretaries of state. They should all risk being held in contempt. Our republican democracy demands no less.

I'm not encouraging lawlessness. I'll cite Martin Luther King, Jr.'s "Letter from a Birmingham Jail." In it, he said: "In no sense do I advocate evading or defying the law, as would the rabid segregationist. That would lead to anarchy. One who breaks an unjust law must do so openly, lovingly, and with a willingness to accept the penalty. I submit that an individual who breaks a law that conscience tells him is unjust, and who willingly accepts the penalty of imprisonment in order to arouse the conscience of the community over its injustice, is in reality expressing the highest respect for law."

My suggestion is, in reality, expressing the highest respect of a state's sovereignty, too. Remember the Republican jurists aren't just stomping federalism. They are making state elected officials complicit in the disenfranchisement of their constituents. State residents, if they choose to, would be right in punishing the complicit. If you're going to err in a republican democracy, do you err on the side of judges or the side of the people? That's a moral as well as a legal question. The answer should be plain.