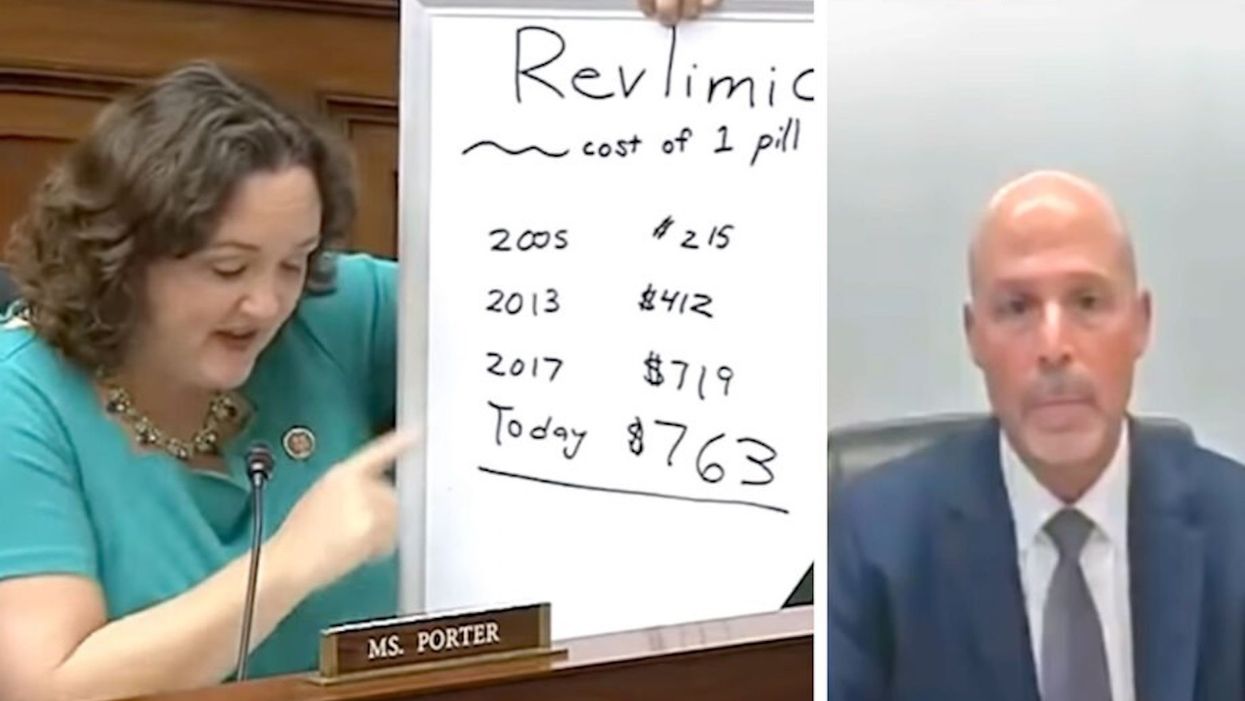 Democratic Rep. Katie Porter has spent her first couple of years in Congress really working hard to point out the corruption and greed being perpetrated by the CEOs of major industries. She's exposed the banking industry and its moral bankruptcy, and she has time and time again exposed the criminal negligence, greed, and corruption in the Trump administration. She is frequently using her time in House committee hearings to face off against the smartest men in the room: the CEOs of Fortune 500 companies.

These are men that can buy and sell all of us! Manly men, with big brains, right? Not really. They're just good at taking money from people. That's usually the entirety of their personal acumen. On Wednesday, former Celgene CEO Mark Alles joined two other pharmaceutical company CEOs to testify about drug pricing at a House Oversight Committee hearing. Porter decided to pull out her big white board and give Alles—and America—a lesson in what exactly CEOs of these companies do for a living: Price gouge the American people.

Porter first asked Alles to answer what the cost of the cancer drug Revlimid was in 2005, 2013, 2017, and today. Alles couldn't readily come up with those numbers because he's a big shot CEO. The short story is that Revlimid cost $215 per pill in 2005 and right now it costs $763 per pill. Obviously, the pill must have gotten better and/or the demand has diminished for the pill! Wrong. In fact, Alles admits that a lot more uses for the pill were discovered, meaning a ton more patients, and shockingly, nothing about the pill or its efficacy has changed.

So why is the price going up? Why is Medicare paying out $3.3 billion for Revlimid?

Rep. Porter has some ideas if CEO Alles doesn't. It turns out that Mr. Alles made $13 million, which is "200 times the average American's income and 360 times what the average senior makes on Social Security," she kindly explained to him. And lo and behold! Mr. Alles gets nice big bonuses if he raises the cost, say triples the cost since 2005, of Remlivid. In fact, to bring an average monthly course cost of the cancer drug to a patient up to $16,023, Mr. Alles was able to pocket an extra $500,000. Sweet deal. Fuck those cancer patients, amiright? Don't worry, everyone else will pay for it!

Amen. The Committee's findings on Celgene price gouging can be found in their report here.