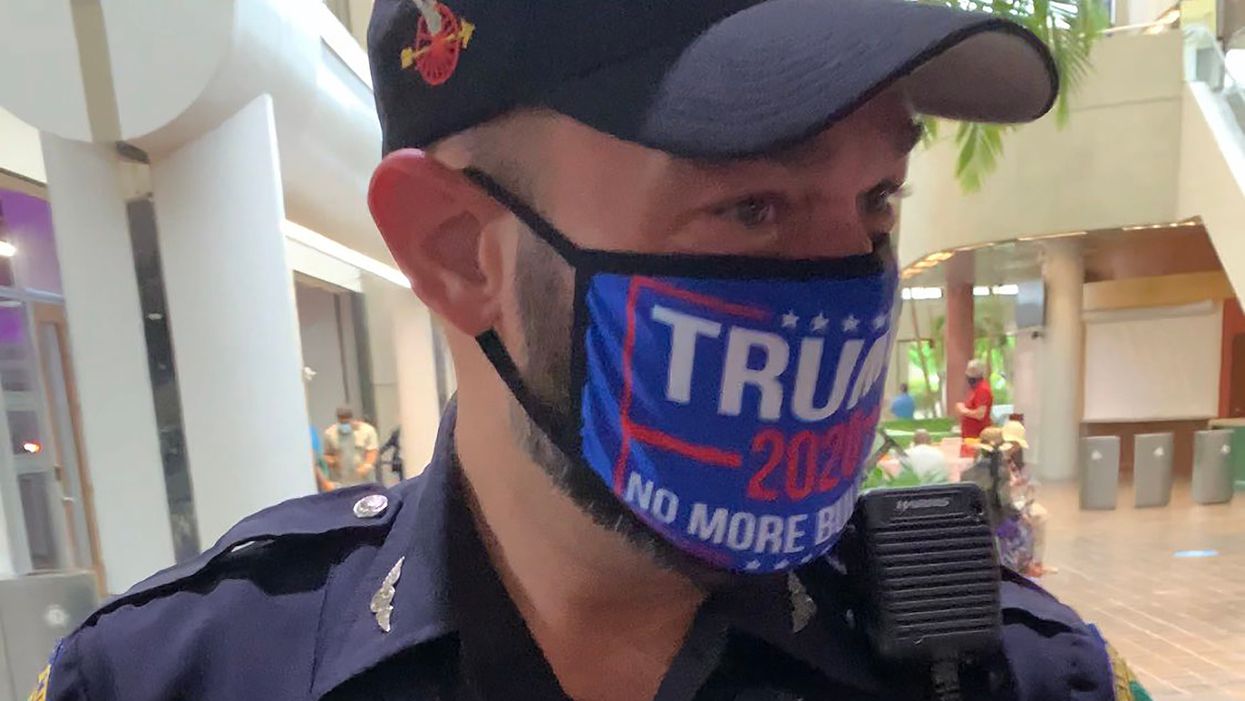 Early voting kicked off in Florida on Monday, Oct. 9. On Tuesday morning, the chair of the Miami-Dade Democratic Party, Steve Simeonidis, tweeted out a photo he reportedly took of Miami Police Officer Daniel Ubeda inside of an early polling location. The image showed that the fully uniformed and armed law enforcement officer was wearing a "Trump 2020: No More Bullshit" face mask. NBC Miami reports that the location of the image was the Stephen P. Clark Government Center in downtown Miami.

This is, of course, wrong for so many, many reasons. If he were wearing a Biden mask and carrying a gun, it would be problematic. But there is also a very specific set of Florida statutes that Mr. Ubeda is violating. Specifically, 102.101, which clearly states: "Sheriff and other officers not allowed in polling place. No sheriff, deputy sheriff, police officer, or other officer of the law shall be allowed within the polling place without permission from the clerk or a majority of the inspectors, except to cast his or her ballot. Upon the failure of any of said officers to comply with this provision, the clerk or the inspectors or any one of them shall make an affidavit against such officer for his or her arrest."

Sheriff Ubeda should only be there in his full uniform if he is voting or has been asked by the clerk or elections inspectors to remove a person like … Sheriff Ubdea himself. The fact that he's wearing a Trump mask that includes profanity is just icing on the cake. :

The City of Miami Police released a statement to news outlets saying: "This behavior is unacceptable, a violation of departmental policy, and is being addressed immediately."

That's some weak sauce. It's a level of poor judgment so extreme that I'm not sure why he is even allowed to have the job he has in the first place. Deputy Police Chief Ron Papier told the Miami Herald that officer Ubeda is in "clear violation of our department policy regarding campaigning while on duty," Papier said. "Additionally, the mask has offensive language, which is also a violation of department policy."