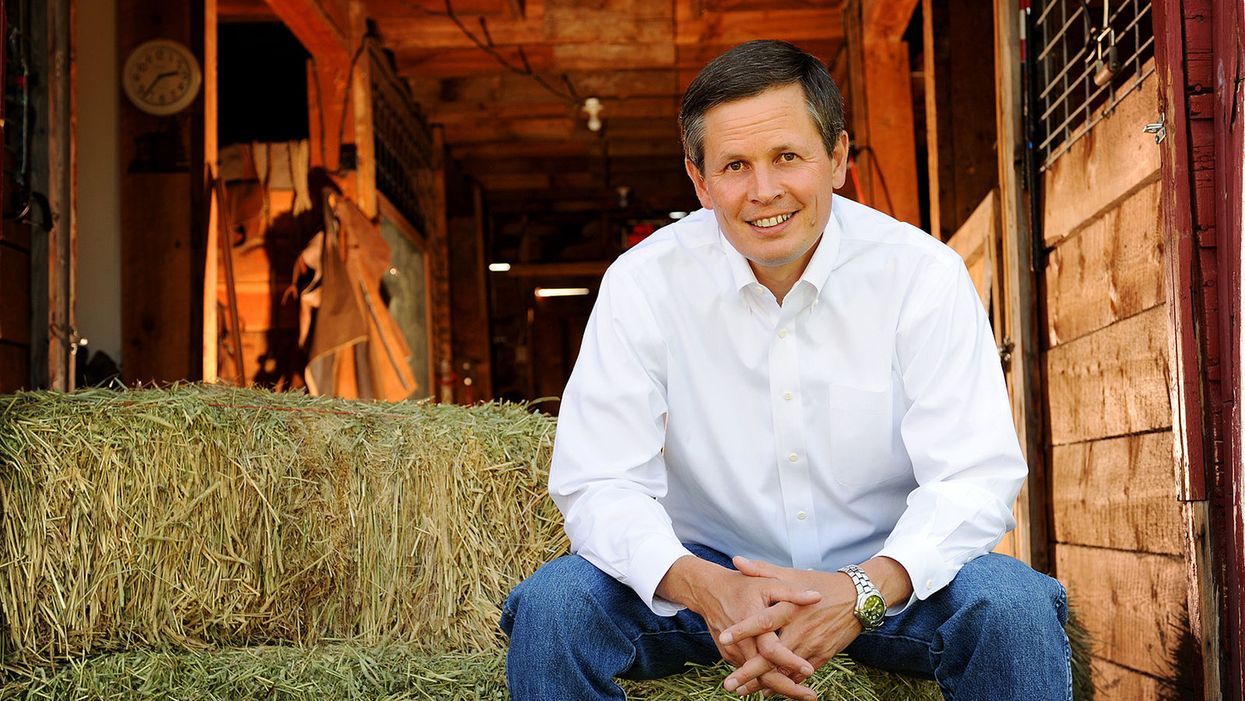 Sen. Steve Daines of Montana, one of the richest members of the U.S. Senate, has repeatedly backed policies that benefited both him and his longtime business partner Rep. Greg Gianforte, who is Montana's lone congressman and the richest member of the House of Representatives. The two Republicans are both involved in tight political campaigns this year: Daines is running for re-election against Montana Gov. Steve Bullock, a Democrat and former presidential candidate, in a race that could well decide control of the Senate. Gianforte is running for governor against Democratic Lt. Gov. Mike Cooney.

Daines and Gianforte have done business together for decades and co-own a real estate company that appears to have benefited from the 2017 Republican tax bill, which they both supported. Daines made his vote for the bill contingent on increasing a tax deduction for "pass-through" entities, which allow business income to be treated as personal income, a deduction that appears to have saved him thousands in taxes. Daines has also sponsored several more obscure bills that benefited Gianforte, who has an estimated net worth of $189 million.

Daines and Gianforte own 75% of Genesis Partners, a commercial real estate firm, with Daines holding about 25%, according to the Helena Independent Record. Daines and Gianforte were listed as "active" managers on the company's 2019 annual financial report filed with the Montana Secretary of State's office. Daines valued his assets in Genesis between $4 million and $17 million and reported between $430,006 and $4.1 million in rent or royalties and capital gains income from the firm in 2019, according to his most recent personal financial disclosure.

Both Daines and Gianforte voted to back the 2017 Republican tax bill, which was a "boon to commercial real estate owners." The bill doubled the depreciation deductions for commercial real estate investors for heating, ventilation, air conditioning and fire protection systems. After the tax law went into effect in 2018, Genesis Partners received a building permit valued at $300,000 that included work on the HVAC and fire suppression systems at its property at 110 Enterprise Boulevard in Bozeman, Montana, its first such permit since 2004. The company later sold the property in December 2019, according to Daines' financial disclosure, after its value jumped from $1.75 million in 2018 to $2.08 million in 2019, according to the Montana Department of Revenue.

Genesis also received a building permit valued at $80,000 that included work on the fire sprinkler at a nearby property at 136 Enterprise Boulevard that same year, its first such permit since 2009. The value of the property increased from $4.94 million in 2018 to $6.44 million in 2019, according to the Montana Department of Revenue, while the Republican tax law allowed for additional savings on the company's tax bill.

Daines had threatened to oppose the tax bill because it did not "cut taxes deeply enough" for pass-through entities, Politico reported ahead of the vote. The GOP secured Daines' vote by expanding the increasing the deduction for pass-through entity owners from 17% to 20%. The deduction would have shaved about $37,946 from Daines' taxable income in 2017, according to an analysis by the Billings Gazette.

Daines has also supported legislation that benefited Gianforte, who has been his close friend since the late 1990s. Daines worked at the Bozeman tech firm RightNow Technologies before Gianforte sold the company to Oracle for $1.8 billion, as Salon's Roger Sollenberger has previously reported. Both lawmakers have backed policies that Oracle lobbied for since coming to Congress. Daines left the firm before the sale but retained his stock, which resulted in a big windfall. He is now one of the richest members of Congress, with an estimated net worth of $6.9 million.

Daines' and Gianforte's campaigns did not respond to questions from Salon.

In 2017, Daines sponsored a bill that could benefit the Fair Isaac Corporation (FICO), the credit monitoring agency. Gianforte is a member of FICO's board of directors and owns nearly $7 million in the company's stock.

The Support for Rapid Innovation Act was intended to encourage the Department of Homeland Security to support private sector cybersecurity research. Daines did not refer to FICO by name but touted the company's technology during a hearing on the bill and called for similar technology to be adopted by DHS for cybersecurity purposes.

That same year, Daines co-sponsored the Modernizing Government Technology Act, which was passed as an amendment to a defense funding bill. The bill established "IT working capital funds at 24 federal government agencies and allow[ed] them to use savings obtained through streamlining IT systems, replacing legacy products and transitioning to cloud computing for up to three years for further modernization efforts."

That bill created a new pool of federal money to dole out to big tech firms, and was a big boost to multiple companies in which Gianforte owns stock. Red Hat and ServiceNow — Gianforte's biggest tech holdings — along with Cisco and IBM all lobbied for the bill.

Red Hat also lobbied for "procurement reform" in 2017 and later lobbied on issues related to the implementation of the Federal Information Technology Acquisition Act (FITARA). In 2017, Daines sponsored Senate version of the FITARA Enhancement Act, which expanded the original law.

Gianforte also reported owning $2.4 million in stock in financial institutions in 2018. Daines sponsored numerous bills aimed at deregulating the financial sector. He sponsored the CLEAR Relief Act of 2017, "which provides a [Consumer Financial Protection Bureau] qualified mortgage safe harbor for small financial institutions with $10 billion or less." Numerous banking groups lobbied for the bill, portions of which were later passed as part of a larger legislative package.

Daines also sponsored the TAILOR ACT of 2017, "which requires financial regulators to tailor their rules to consider the size, risk profile, complexity, and business model of financial institutions impacted." That bill was approved by the Republican-led House but stalled in the Senate.

Daines was also behind the Home Mortgage Disclosure Adjustment Act of 2017, "which exempts small community banks and credit unions that issue less than 500 mortgages annually from onerous demographic reporting requirements." Portions of that bill were later rolled into a separate legislative package.

Daines also pushed the Consumer Financial Protection Bureau (CFPB) Accountability Act of 2017, which aimed to "address regulations passed under Dodd-Frank and make the bureau accountable to the American people by bringing it under the Congressional appropriations process." The bill never came to a vote.

Daines was also a key player in the Trump administration's rollback of the Dodd-Frank regulations passed after the Great Recession, and was singled out by President Donald Trump at the bill's signing ceremony even though he was not a co-sponsor of the bill or a member of the Senate Banking Committee.

The two lawmakers have also enjoyed an unusually close relationship in Washington. Gianforte and his wife Susan were two of Daines' earliest financial backers when the latter announced his first run for Congress in 2010. They also made maximum donations to Daines' campaign when he ran for U.S. Senate in 2014 and again the following year after he was elected. Gianforte even hosted a fundraiser for Daines that was headlined by former House Speaker John Boehner, the National Journal reported, noting that Gianforte could "benefit from Washington connections through his friendship with Sen. Steve Daines."

Daines, likewise, endorsed Gianforte in his failed 2016 gubernatorial bid and campaigned for him in 2017 when Gianforte won his congressional seat in a special election, despite body slamming a reporter during the campaign.

Since Gianforte's election to the House, Daines has flown on Gianforte's private plane at least nine times, according to his 2017 and 2018 personal financial disclosures. Daines reported that he reimbursed Gianforte for all the flights, often paying more than $2,000 for air travel that would have cost a fraction of that price on commercial airlines.