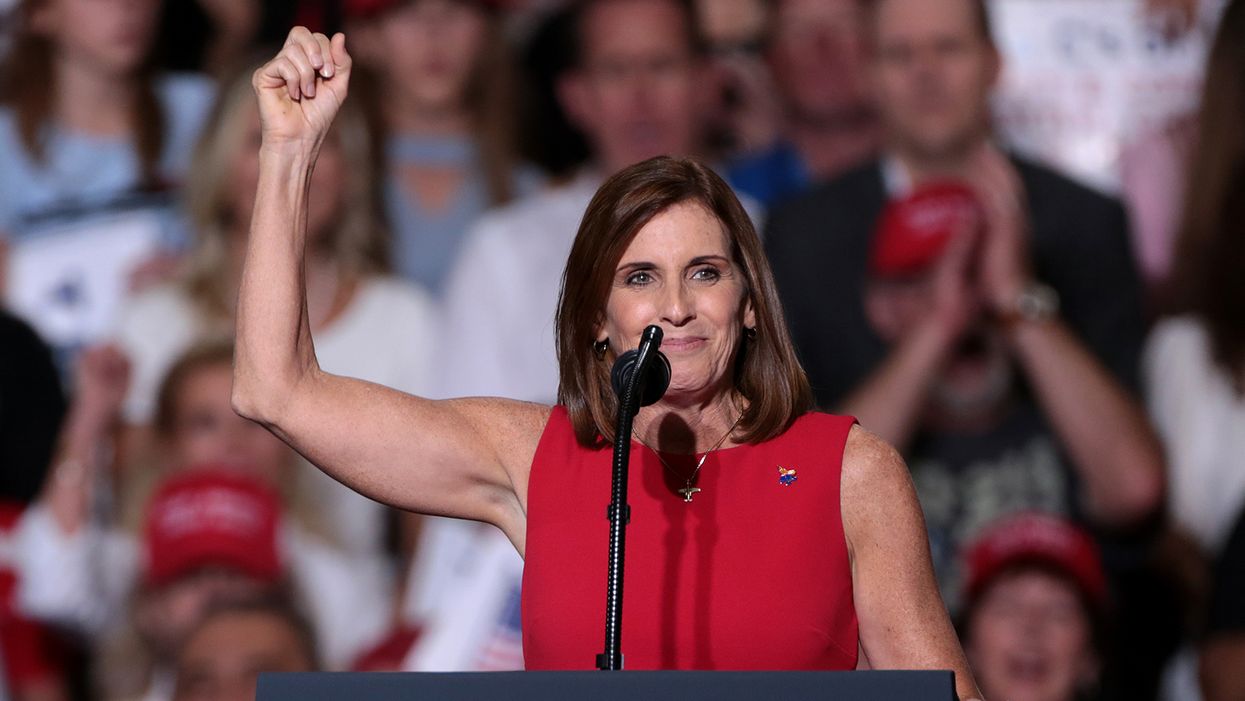 On Tuesday night, October 6, incumbent Republican Sen. Martha McSally debated her Democratic challenger, centrist Mark Kelly, in Arizona. McSally's supporters were hoping that the debate would give McSally a chance to save her ailing campaign, but journalist Shay Khatiri — in an article published on the conservative website The Bulwark — argues that the debate was a total flop for McSally.

Poll after poll has shown McSally losing to Kelly, a former astronaut, in Arizona's 2020 U.S. Senate race. During the debate, McSally tried to paint the centrist Kelly as far-left — which is the same thing she did in 2018 with another centrist Democrat, Kyrsten Sinema, who defeated her and now holds the U.S. Senate seat formerly held by Republican Jeff Flake.

During the debate, Khatiri explains, "McSally's broader strategy was to depict Kelly as a far-left candidate in bed with Senate Democratic (Minority) Leader Chuck Schumer, which is funny since Schumer, despite his countless flaws, isn't a far-left politician himself. She kept mentioning Kelly's support for The Squad, naming Ilhan Omar and Rashida Tlaib but not Alexandra Ocasio-Cortez and Ayanna Pressley. And one wonders whether this has anything to do with the fact that Arabic names are scarier to Arizona voters."

Khatiri notes that McSally wasn't always as extreme as she is now.

"McSally used to be a rising star and a McCain Republican: pragmatic, hawkish, pro-immigration and moderate," Khatiri explains. "Once the GOP became Trumpy, though, McSally — as Tim Miller has put it — maneuvered toward Trump."

McSally presently holds the U.S. Senate seat that, for many years, was held by Sen. Barry Goldwater and later, Sen. John McCain — who Sinema has praised more than once. And if Kelly defeats McSally in November, the once-red Arizona could end up with two Democratic U.S. senators.

"During her failed Senate campaign in 2018," Khatiri writes, "McSally attacked her opponent's flamboyance by dubbing her 'Hollywood Sinema.' It didn't work. And she's doubling down on the Trumpy name-calling this year: Mark Kelly is 'Counterfeit Kelly,' a phrase she used at least nine times during the debate. Counterfeit of what? Who knows! Perhaps his identical twin?"

According to Khatiri, "The problem with depicting Kelly as a far-left candidate is that he just isn't one. In fact, the far left was trying to recruit Rep. Ruben Gallego to run in the primary against Kelly."

Polls released in October have found McSally losing to Kelly by 11% (New York Times/Siena College), 10% (Reuters/Ipsos), 8% (CNBC/Change Research) or 9% (USA Today/Suffolk). And Khatiri stresses that McSally's debate performance only made things worse for her.

"Kelly's only bad moment came in the beginning, when he refused to pick a side on getting rid of the filibuster," Khatiri writes. "Overall, he came off as personable, calm, and articulate — in a word, he was senatorial. McSally, by contrast, was obnoxious and spoke too fast. She had to be corrected on facts by her opponent and a moderator. The polls suggest that November is going to bring an unfortunate end to her once-promising political career."