With revelations that herd immunity isn't just the accidental result of Donald Trump's inaction, but the policy actually being pursued by the Scott Atlas-dominated coronavirus task force, something that has never made any sense finally clicks into place. Why have Trump, White House officials, Republicans in Congress, and right-wing media all conspired to constantly attack the simplest tool in fighting COVID-19? Why have they been waging a war on masks?

Masks are cheap. Masks are effective. Wearing masks is the most straightforward step that can be taken to instantly reduce the spread of disease. Studies have directly tied the use of masks not just to lower rates of infection, but to lower levels of hospitalization. In September, Trump railed against Centers for Disease Control and Prevention (CDC) Director Robert Redfield for saying that masks are actually more effective than a vaccine for bringing COVID-19 under control. Redfield said that masks were not just the nation's "best defense," but medicine's most important weapon against the disease.

On Thursday morning, the CEO of pharmaceutical giant Merck doubled down on Redfield's statement by saying that neither vaccines nor treatments against COVID-19 represent a "silver bullet." Instead, he said that people should keep wearing masks, and expect to be wearing masks into the next year.

At the same time, The Wall Street Journal is running an editorial that continues the war on masks by calling them a "distraction." The reason is obvious: because the right wants everyone to hurry up and get sick. And that's not a joke.

Misinformation about masks isn't being generated by confusion or a lack of consistency among experts. It's the other way around. Confusion is being generated by misinformation specifically generated to give the appearance that masks are either ineffective or that experts are in disagreement. The Wall Street Journal editorial by cardiologist Joseph Ladapo is a primary example.

Ladapo—who has been the Scott Atlas of The Wall Street Journal's editorial page for months—begins his anti-mask manifesto by looking at why health officials began insisting that wearing masks was important. He's correct in saying that the discovery of asymptomatic transmission was a major factor. He's hugely incorrect in saying this is "a weak rationale" for masks. He's also hugely deceptive in citing as proof a study that looked at how face masks and other factors worked against flu, and representing it as a general study on a "respiratory virus." It's not.

He goes on to attack researchers for not anticipating that COVID-19 might spread without symptoms because "presymptomatic spread of respiratory viruses isn't a novel phenomenon." But there's a very good reason that experts were surprised to find the SARS-CoV-2 virus spreading without symptoms; it's called the SARS-CoV virus. People who catch SARS become symptomatic before becoming highly infectious, with first symptoms appearing about five days before the patient begins to expel virus at a high rate. That was a major factor in how SARS was isolated and defeated. It was completely understandable that experts expected these two very similar viruses would behave in a similar way. Asymptomatic and presymptomatic spread of COVID-19 was a genuine surprise.

Ladapo then goes on to dismiss the idea of using masks to protect against asymptomatic cases by saying: "Asymptomatic or mild cases appear to contribute more to Covid-19 transmission, but this happens in flu cases, too, though no one has called for mask mandates during flu season."

Why would that be? Here's what the same study that Ladapo cited as evidence against masks being effective had to say about flu:

Most influenza virus infections cause mild and self-limiting disease; only a small fraction of case-patients require hospitalization.

Policy makers and the media point to low-quality evidence, such as a study of Covid-19 positive hairstylists in Missouri or a Georgia summer camp with an outbreak. These anecdotes, while valuable, tell us nothing about the experience of other hairdressers or other summer camps that adopted similar or different masking practices.

This is a medical doctor attacking not just the entire basis of human trials, but delivering a backhand to the entire scientific process. The reason you look at results of specific tests is exactly because they can tell you something about the general experience. If they cannot, someone should call the vaccine manufacturers and tell them to stop the trials.

But all of this is only leading up to the main theme, to the point where Ladapo pulls off his own masks and gets down to what he's really selling.

… mask mandates have the unintended consequence of delaying public acceptance of the unavoidable truth. In countries with active community transmission and no herd immunity, nothing short of inhumane lockdowns can stop the spread of Covid-19, so the most sensible and sustainable path forward is to learn to live with the virus.

As a study just released Wednesday from Vanderbilt University demonstrates, there is a direct connection between the rate of mask-wearing in an area and the rate of hospitalization. 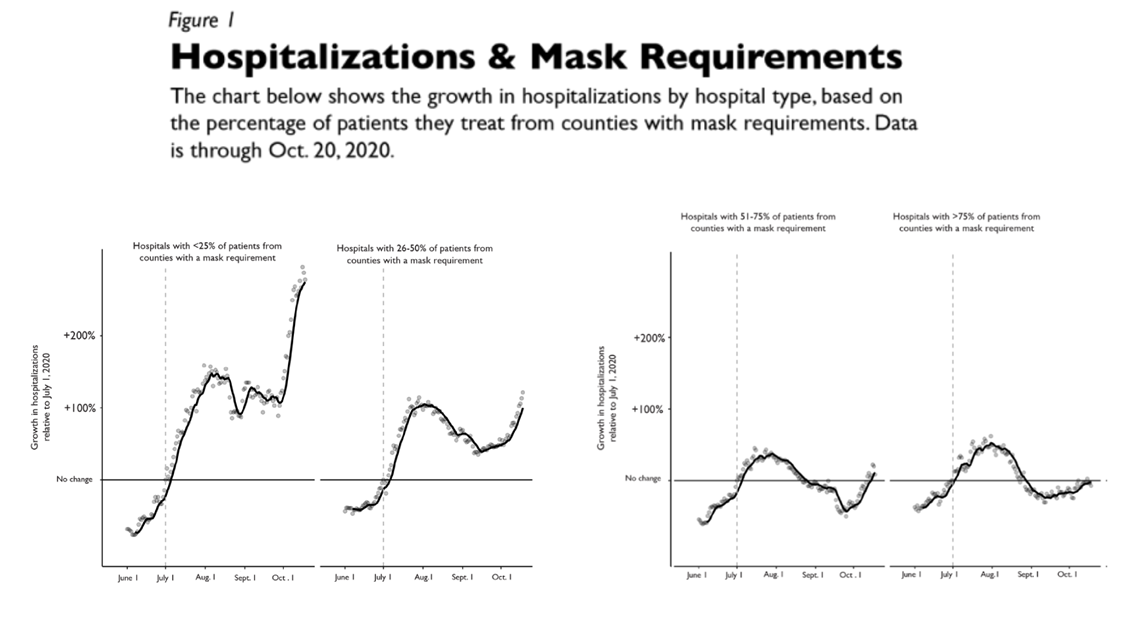 Vanderbilt medical school originally did this analysis in August, and repeated it again with data through early October. In both instances, the effects of widespread mask-wearing are dramatic. The study looks at county-level data to show that not only are masks effective, mask mandates are effective. The University of Washington Institute for Health Metrics and Evaluation review in August also demonstrated that masks not only cut the rate of infection, they prevented the kind of sharp spikes that tipped healthcare systems over the edge.

Masks work. They work best in areas with mandates and a very high level of use. The war on masks is an extension of the push for herd immunity, and the forces behind it are making that more and more evident.