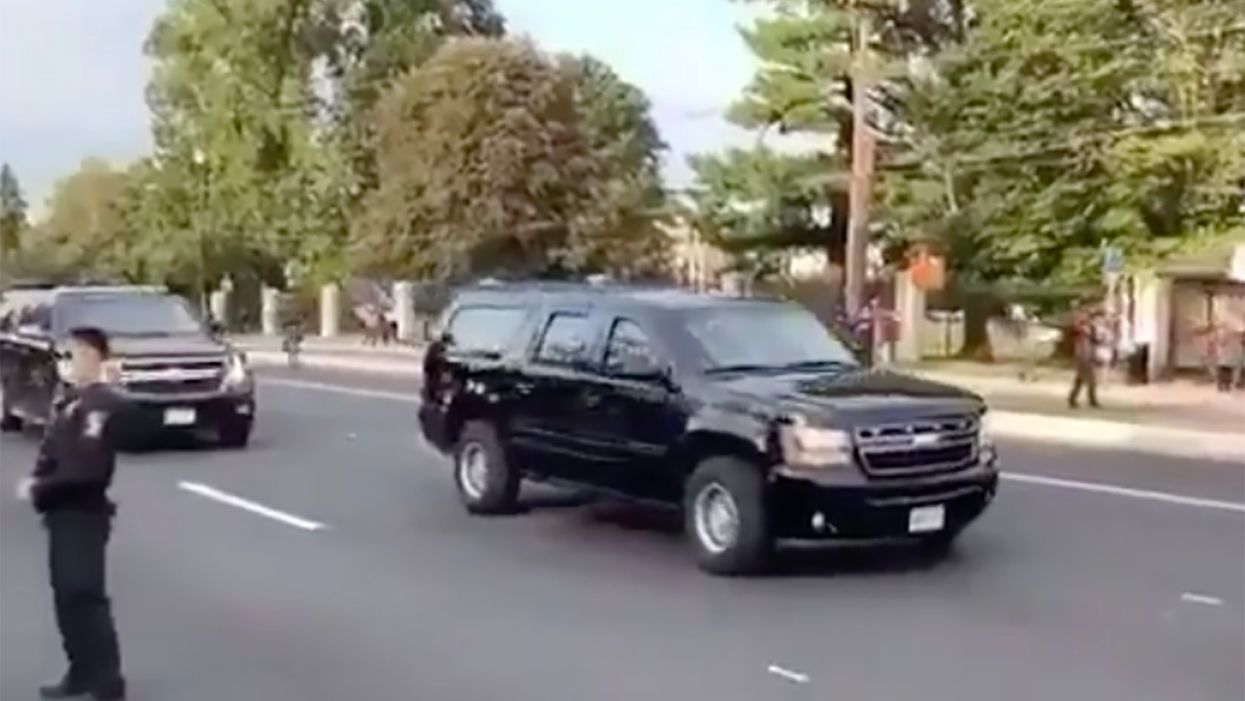 An attending physician at Walter Reed National Military Medical Center took to Twitter Sunday evening to publicly voice outrage at President Donald Trump's decision to briefly leave the Maryland hospital to greet supporters rallying nearby, a move the doctor slammed as "political theater" that endangered the health and potentially the lives of those forced to participate.

"Every single person in the vehicle during that completely unnecessary presidential 'drive-by' just now has to be quarantined for 14 days," tweeted Dr. James Phillips, chief of disaster medicine at George Washington University. "They might get sick. They may die. For political theater. Commanded by Trump to put their lives at risk for theater. This is insanity."

At least two masked Secret Service agents were inside the armored and enclosed SUV, which Phillips noted in a subsequent tweet "is not only bulletproof, but hermetically sealed against chemical attack."

"The risk of Covid-19 transmission inside is as high as it gets outside of medical procedures," Phillips wrote. "The irresponsibility is astounding. My thoughts are with the Secret Service forced to play."

In an interview with the New York Times late Sunday—just 48 hours after Trump checked into Walter Reed amid concerns that his condition was deteriorating—Phillips raised the possibility that the president is improperly ordering the facility's doctors to abide by his politically motivated whims.

"At what point does the physician-patient relationship end, and does the commander in chief and subordinate relationship begin, and were those doctors ordered to allow this to happen?" Phillips asked, pointing out that no other coronavirus-infected patient would be permitted to briefly leave the hospital as Trump did Sunday, in violation of CDC guidelines.

Dr. Leana Wen, an emergency physician and visiting professor of health policy and management at the George Washington University's Milken School of Public Health, tweeted Sunday that "if Donald Trump were my patient, in unstable condition plus contagious illness, and he suddenly left the hospital to go for a car ride that endangers himself others: I'd call security to restrain him then perform a psychiatric evaluation to examine his decision-making capacity."

Trump's stunt—an apparent attempt to project an image of speedy recovery from the virus that has killed more than 209,000 Americans on his watch—came at the close of a weekend packed with obfuscation by the administration officials responsible for keeping the public apprised of the president's condition.

On Saturday, White House physician Sean Conley delivered a press briefing in which he muddled the timeline of Trump's coronavirus diagnosis, offered a rosy assessment of the president's condition, and repeatedly dodged straightforward questions about the treatment process.

In the face of criticism from public health experts and members of the press, Conley admitted Sunday that his earlier briefing was "trying to reflect the upbeat attitude that the team, the president, over his course of illness, has had" rather than providing an unvarnished account of Trump's medical status. After refusing to do so on Saturday, Conley finally acknowledged Sunday that Trump experienced two drops in blood oxygen levels on Friday and Saturday and received supplemental oxygen at least once.

"Every statement he is giving appears to be political, dictated by the White House or the president," one unnamed person who has worked with Conley told the Washington Post. "These are not the statements a medical doctor gives."

The president's medical team on Sunday also belatedly disclosed that Trump is being treated with dexamethasone, a steroid that is typically only recommended for severe cases of Covid-19.

But despite indications that Trump's illness is more serious than administration officials are letting on, the president's doctors said he could be discharged from Walter Reed as early as Monday. In a column for the Washington Post on Saturday, Wen wrote that "based on the limited information we have about President Trump's health, it's too risky to send him back to the White House on Monday."

"In the absence of trusted information, we are left to speculate on a matter as consequential as the president's health," Wen added. "Based on what we know, discharging Trump from the hospital on Monday seems premature and potentially dangerous."