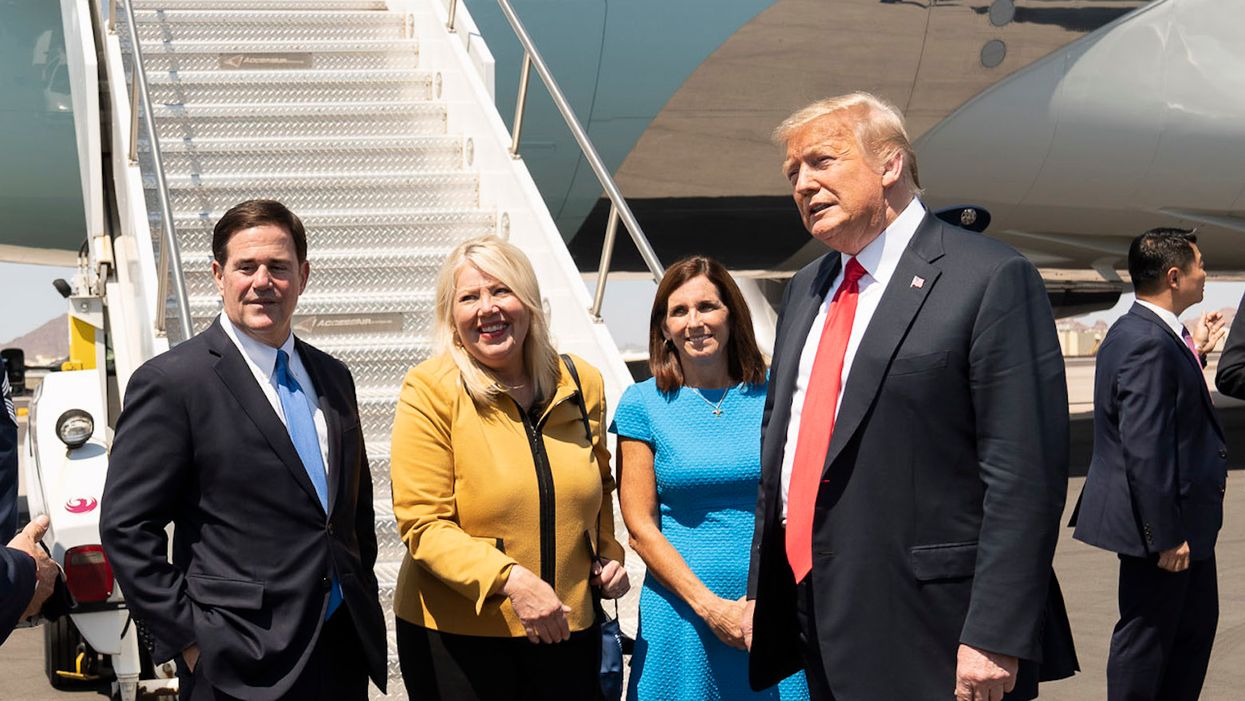 Poll after poll on Arizona's 2020 U.S. Senate race has showed incumbent Republican Sen. Martha McSally losing to her Democratic challenger, Mark Kelly. And according to Washington Post columnist David Byler, President Donald Trump will bear some of the responsibility if McSally loses.

"The suburbs represent McSally's biggest Trump-induced struggle," Byler explains in his column this week. "The vast majority of Arizona's votes come from Maricopa and Pima counties, which roughly correspond to Phoenix and Tucson."

The possibility that Arizona could end up with two Democratic U.S. senators — Sen. Kyrsten Sinema and, if he wins, Kelly — is downright shocking in light of how deeply Republican Arizona was for many years. Arizona is closely identified with the conservative politics of Sen. Barry Goldwater and Sen. John McCain, and McSally is fighting to hold onto the Senate seat once held by, at different points, both men.

But in recent years, Arizona has evolved into a swing state.

In the past, Goldwater and McCain had no problem performing well in Maricopa County or Pima County. But McSally, Byler notes, is struggling in those counties, where Trumpism is hurting her campaign.

"For years, these counties weren't problems for Republicans," Byler notes. "Maricopa used to be staunchly Republican, with older voters, immigration hardliners and well-educated suburbanites coming together to vote for GOP politicians who ranged from immigration restrictionists such as former Gov. Jan Brewer to relative moderates such as the famously bipartisan Sen. John McCain. Democrats won Tucson, but not by margins large enough to overcome Phoenix and GOP-friendly rural areas. But in 2016, Trump gave up suburban votes, losing ground in both counties."

In 2018, Byler adds, Sinema "won Maricopa County by four points and notched a two-point statewide victory over McSally, giving the seat to the blue team for the first time since 1988."

McSally has never won a U.S. Senate race in Arizona, but Gov. Doug Ducey appointed her to the seat that McCain, who died in 2018, held for many years. Sen. McCain detested Trump, and his widow, Republican Cindy McCain, has endorsed former Vice President Joe Biden in the 2020 presidential election.

"The suburbs aren't McSally's only problem," Byler observes. "Trump has also closed off many of her most plausible avenues for pushing back on the suburban blue wave. Americans above age 65 have turned sharply toward Joe Biden; so, she can't easily appeal to the state's solid senior population. Trump has turned off many Mormons, which probably isn't helping McSally rally the state's small but notable LDS population. And Trump's relative resilience with Hispanic voters will help only so much in Arizona, where 90% of the fast-growing Hispanic population is Mexican-American and Republican-leaning Cuban-Americans are scarce."

McSally, Byler stresses, finds herself in an "unenviable position" because she "has to stay somewhat close to the president to cater to the state's Trumpian base" but must also "find ways to distance herself from Trump to appeal to voters who backed McCain" in 2008's presidential election" and Mitt Romney in 2012 but don't support Trump in 2020.

Polls released during the second half of October have found McSally trailing Kelly by 11% (CBS News/YouGov and CNBC/Change Research), 4% (Morning Consult), 8% (Ipsos) or 7% (RMG Research).

"If Trump manages to push back against these demographic forces and win Arizona, McSally might have a chance," Byler writes. "But if McSally loses, at least part of the blame will rest on Trump."