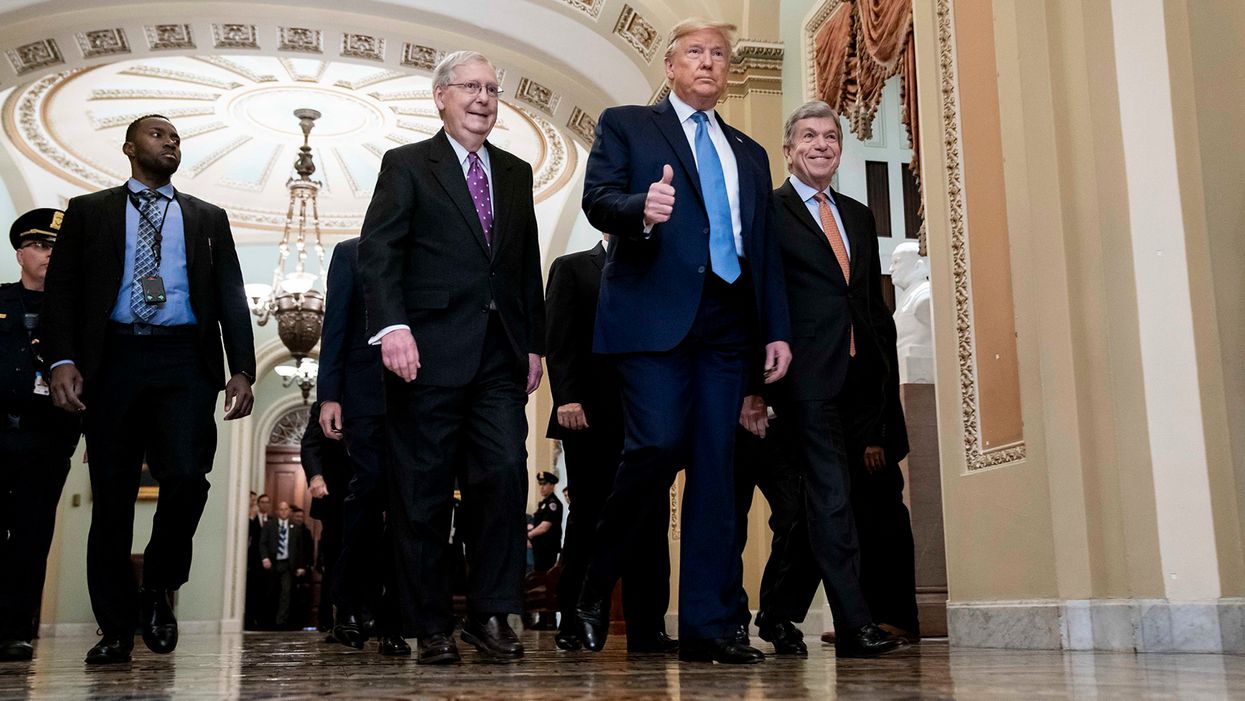 Currently, all talks regarding further stimulus relief to Americans and American businesses ravaged by the COVID-19 pandemic are in limbo. Donald Trump's erratic and confusing tweets are sending mixed signals following the negative reaction of some Republican lawmakers to his unilateral "announcement" earlier this week, declaring that stimulus discussions had ended. Beyond those confusing signals, however, there is no indication that Democrats and Republicans are likely to achieve any agreement on further relief prior to the Nov. 3 election.

There are several important points in this article by Eric Levitz, writing for New York Magazine, that go a long way in explaining why Republican Senate Majority Leader Mitch McConnell and his GOP colleagues believe they can effectively abandon millions of Americans to homelessness, hunger, and unemployment, even consigning American businesses to bankruptcy, by stonewalling further efforts by Democrats to provide COVID-19 relief funding. Levitz convincingly explains why Republicans believe this even though they know the American people may very well punish them by voting them out of power.

As Levitz points out, the primary sticking point for the GOP is not, as many suspect, the aid proposed to individuals in the form of stimulus checks or even increased unemployment benefits. Instead, Republicans are caught on fiscal assistance to those states whose budgets are being drained, thanks to dwindling tax revenues caused by the pandemic. Conservative media have transformed this seemingly logical extension of emergency fiscal appropriations into a culture war flashpoint, with aid to "Democrat states" being vilified as funding programs that (you guessed it) primarily benefit ethnic minorities. In order for any meaningful stimulus legislation to pass, several Republican senators would have to go on the record as supporting such aid, including some senators who are not particularly at risk this cycle.

The most plausible explanation for this state of affairs is this: Most Senate Republicans face no great risk of losing their seats to a Democrat this year or any other. For them, the main threat to their power is a primary challenge. And right now, conservative media has turned opposition to fiscal aid into a cause célèbre, casting support for "blue-state bailouts" as treasonous. Thus, to pass a Pelosi-friendly stimulus deal out of the Senate, McConnell would have to bring a bill to the floor that a majority of his caucus would vote against. This would imperil his leadership. And so he is not going to do it.

Levitz observes that there is one idea animating McConnell's thinking: Even if he loses his majority now, historically, the odds are that he'll be back in power—and very soon. The reasons for this have to do with the structure and makeup of the Senate itself, a body that gives undue power to Republicans despite their lower numbers in terms of the actual American population. As Levitz notes, based on the results of the last two presidential elections, "The median U.S. state is 6.6 percentage points more Republican than America as a whole," thanks to the polarization of urban vs. rural districts in terms of their political demographics.

Thanks to urban-rural polarization — and our Republic's abundance of scarcely populated rural states — Republicans have a massive built-in advantage in the Senate. This doesn't just mean that many GOP incumbents hail from places where Democrats are few and far between. It also means that it is very hard for Republicans to ever be more than one solid midterm away from controlling the upper chamber.

And that's key to McConnell's calculus. Even without passing a stimulus, he still has a decent shot at a 51-vote majority. The races in North Carolina, Maine, and Iowa are all close. And the Democratic candidate in the Tarheel State is mired in an adultery scandal. What's more, even if McConnell loses his majority, Democrats' odds of holding more than 52 seats next January are quite low. Assuming a Biden victory, the GOP would have an excellent chance of winning back Senate control in 2022, as the opposition party almost always enjoys a major turnout advantage in midterm elections. By walking away from the stimulus, McConnell is prioritizing conservative ideology over personal power. But the political cost of doing this is relatively low.

Barring a sea change in this country's political alignments, McConnell simply believes he'll be back in two years as Senate majority leader. Why not leave Biden to face a charred landscape, so that he'll just spend those two years digging the country out of it? As Levitz points out, "[T]the Senate's bias deforms the GOP by enabling it to ignore public opinion—and utterly betray the material interests of its own voters—without ever putting itself out of contention for federal power." In short, McConnell can afford to cripple the American economy because he knows his return to power as the Senate's majority leader is not contingent on the will of the majority of the American people.

The fact that our political system of government structurally supports the modern Republican Party (due to the fact that rural voters tend to be less educated, less cosmopolitan, and therefore more receptive to racist rhetoric and appeals) has led us into a type of institutional corrosion, where Republicans can effectively ignore the will of the majority of the people and still stay in power. It is highly doubtful that the founders of the country imagined this as the endgame to their constitutional scheme, but it is an inherent, glaring flaw in our system that cannot be corrected by any feasible means (unlike the Electoral College system, for example, which could conceivably be abolished by constitutional amendment).

Assuming Joe Biden is elected on Nov. 3, and assuming Democrats manage to retake the Senate, what this means from a practical standpoint is that President Biden must act with sweeping, extensive measures immediately upon his inauguration, not only to salvage the wreckage of the republic that Republicans are deliberately leaving him, but to ensure that those measures last beyond merely the next election cycle. There can be no bipartisanship—in fact, that word needs to be excised from the Democratic lexicon. It should go without saying that to achieve this, the legislative filibuster must be eliminated on Day One. Yes, Republicans will likely once again dominate the Senate, but if they are permitted to block any legislative measures at this time, the country will face endless, permanent stagnation.

But there is something else that must be done, and this will be the greatest challenge: The Supreme Court must be expanded. With the advent of a 6-3 right-wing majority looming, there is simply no other option.

As Nicholas Bagley, writing for The Atlantic points out, we have already been given a preview of what damage a 6-3 conservative majority on the U.S. Supreme Court will wreak on any legislation passed by a Democratic Congress and signed into law by a Democratic president. Because that is what is happening in Michigan, right now.

Last week, in a 4–3 party-line vote, Republican judges on the Michigan Supreme Court invalidated a law that had empowered a historically popular Democratic chief executive to take emergency actions to combat COVID-19. The basis for the decision was an antiquated doctrine that conservatives on the United States Supreme Court have signaled they want to revive.

[...]That brazen ruling in Michigan previews where the U.S. Supreme Court might take the country, especially with the breathing room that a 6–3 conservative supermajority would create. Although the news media have mostly focused on what a Justice Amy Coney Barrett would mean for abortion and gun rights, her confirmation may pose a more fundamental threat to good governance. The United States Supreme Court, like the Michigan Supreme Court, may become an even more stridently partisan instrument than it already is, one that by design will frustrate Democratic efforts to govern.

What the right-wing majority of the Michigan Supreme Court relied on in striking down Gov. Gretchen Whitmer's orders issued under the state's Emergency Powers statute is something known as the "non-delegation" doctrine, a vague and antiquated legal principle which, as Bagley describes, "ostensibly prohibits legislatures from passing laws that delegate too much power, or power of the wrong kind, to the executive branch." On the federal level, that doctrine, which has not been used to invalidate an act of Congress for nearly a century, was effectively defunct until Trump-appointed Justice Neil Gorsuch argued in a dissenting opinion last year that it should be revived.

As Bagley explains, the "non-delegation" doctrine, if reestablished, would permit the Supreme Court to invalidate virtually any legislation that it considers to be an executive "overreach." There is little doubt that the Court, with the addition of yet another conservative fanatic, would be receptive to reinstating it as a weapon to nullify Democratic legislation.

A revived nondelegation doctrine would give conservatives a useful tool to beat back laws adopted under a Biden administration. Judges have no principled way to identify statutes that delegate too much power or power of the wrong kind, a point made most eloquently by Justice Antonin Scalia. But if Michigan is any guide, Republican judges will be especially eager to find that the line has been crossed once Democrats are in charge.
[...]

The larger lesson [from Michigan]is that Republican judges are serious about using their power to obstruct Democrats in office, even when doing so is legally indefensible and blatantly undemocratic—indeed, even when it jeopardizes human life. There's no reason to expect a conservative supermajority on the United States Supreme Court to act with more restraint. The Republican-appointed justices have the votes to impede pretty much anything Democrats aim to do, whether that's mitigating climate change, expanding access to health care, or extending statehood to Puerto Rico or Washington, D.C.

So while a President Biden will have to act immediately just to repair the economic devastation Senate Republicans are leaving behind, he must also expand the Court in order to preserve the ability of a Democratic legislature to even function. With a Supreme Court soon to be dominated by rabid, right-wing partisans eager to demolish any legislation that conflicts with their ideology, there is simply going to be no other choice.

Put bluntly: Big changes have to happen, and happen rapidly, if this country is going to survive.