Donald Trump is not 'over' COVID-19. He's facing the most critical point in the disease right now 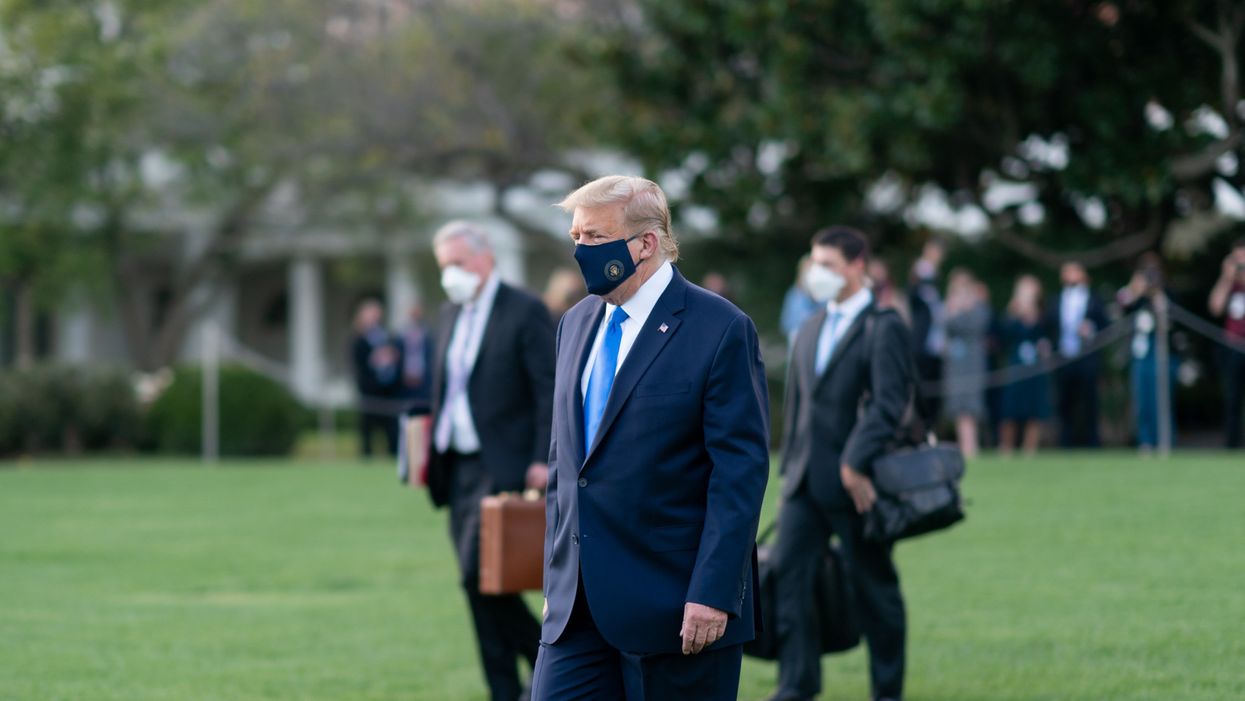 On Saturday morning, former governor and expert on how to torture people who stutter, Chris Christie, announced that he was leaving Morristown Medical Center after being hospitalized for seven nights. Combined with Donald Trump's release from Walter Reed Medical Center Monday evening, it seems that COVID-19 can bypass even people with highly evident co-morbidities, given that those people are given inordinate levels of medical care and mass doses of experimental drugs that are unavailable to ordinary Americans. Or … does it?

Assuming that Donald Trump is giving an accurate account of the chronology of his COVID-19 infection, which is, admittedly, a yuge assumption, he first tested positive on Thursday, Oct. 1 after feeling ill on Wednesday, Sept. 30. For Christie, that positive test came on Saturday, Oct. 3. With both of them now checked out of their respective hospitals—and, in Trump's case, diligently returning to the work of subverting democracy by repressing votes, lying about election fraud, and threatening to have political opponents arrested—it may seem they're out of the woods.

They're not. Because nine months into this pandemic, doctors understand that COVID-19 tends to follow a pattern, especially in patients who have more than an asymptomatic case. That pattern suggests that the critical moment for Trump is … pretty much right now.

As Scientific American explains, Trump has by no means "beaten" COVID-19 at this point. Instead, his course of infection is at a "crucial stage," with the next few days likely to either see him on a path to recovery, or crashing down a slope toward serious relapse.

Doctors and researchers have put together a kind of COVID-19 timeline that reflects how the infection operates. Starting with the initial exposure, it can take anywhere from two days to two weeks for the virus to incubate in someone's system to the point where they become contagious in turn. It's not clear where Trump became exposed. If it was at the Rose Garden super spreader intro of Amy Coney Barrett—where 150 Republican leaders were gathered closely together, mostly without masks, and mostly without any attempt at social distancing—then Trump's incubation period was a fairly typical five days. Trump's refusal to release any negative test results before that date suggests he may have been infected sooner, while changes in precautions at the White House, including the use of two widely-separated podiums for Trump and Mike Pence on Monday following the Barrett event, suggest that he was known to have been exposed by that point.

A person infected with COVID-19 becomes contagious before showing symptoms, which is part of what makes fighting this disease so difficult. However, symptoms (which can be a cough, fever, aches, diarrhea, or a seemingly endless list, including that weird pink eye thing Pence was displaying at his debate) usually begin around the fifth day. That also marks pretty much "peak contagious," so anyone who was around Trump in that last Wednesday through Friday period was getting a maximum dose of Filet-o-Fish-scented virus. It also means that Trump was, almost certainly, highly contagious at the time of his Tuesday debate with Joe Biden.

On Thursday, Oct. 1, Trump had difficulty breathing and was treated with oxygen. Trump also let slip that he had been given the steroid dexamethasone because he had "swelling" in his lungs. This further confuses his timeline, because it's genuinely odd for a patient to go downhill from onset of symptoms to difficulty breathing, hospitalization, and lung involvement in a single day.

In any case, all that was a week ago. Since then, Trump has gone joyriding with the Secret Service, made a panting appearance on a White House balcony, engaged in an unusually explosive bout of Twitterhea, and played stand-in for Rush Limbaugh. So … does that mean the danger is all in his rearview? Not at all.

A week to 10 days after the onset of symptoms is the critical point for most people infected with COVID-19. That's the point where the immune system has had time to mount a response against the invading virus. It's also the point where some people mount too vigorous a response, throwing them into the infamous "cytokine storm." The result can be sudden return of a high fever, and a condition where the immune system begins to attack, not the virus, but the person's own cells. This is the point where people suffer abrupt organ failure. This is the point—not one day after testing positive—when many people end up on oxygen, or even on a ventilator. This, not last week, is the dangerous point for Trump.

Checking out of the hospital after being infected with COVID-19 isn't an all-clear signal. Because a significant number of people check back in, in worse condition than they went through the system the first time.

As BBC News points out, the timing of events around Trump's illness are extremely confusing thanks to the lack of transparency, and obvious attempts to cover-up basic information—from when Trump was exposed to when he began displaying symptoms. There is also a problem of Trump's treatment, none of which follows anything like the normal pattern. Not only was Trump given a massive dose of experimental antibodies—four times the dose people are being given in trials—he also received multiple treatments with dexamethasone, which is usually given to patients with a more severe response at just about this time in their treatment, because the steroid is used to limit the immune response and tamp down the possibility of a cytokine storm.'

That Trump received dexamethasone so early, suggests that the official timeline of his illness might be off by as much as a week. It could be that what Trump experienced back on Oct. 2 was not his first onset of symptoms, but that "crossroads" moment that can set in a week later. The combination of kitchen-sink treatment and deliberately obfuscated information makes it impossible to tell.

But if the White House timeline is anything like accurate, then it's this weekend, not last, when Trump faces the real test. This is the point where, according to Dr. Abraar Karan of Brigham and Women's Hospital, people who earlier checked out feeling fine, "come back feeling much sicker, with even worse oxygen levels and possibly other harm to the body's organs." Patients who go down that fork in the road, can face genuinely serious threats.

Donald Trump and Chris Christie may be out of the hospital, but it doesn't mean that either of them is out of the woods. The next few days will tell whether their treatment has helped put them on the road to recovery … or somewhere else.

It may be worth noting that, as of this writing, Trump appears to have skipped his usual morning "executive time" and issued no tweets.

Author's note: None of this should be read as a wish for Trump to be ill. I want him awake, alert, and without an excuse when he loses the election in three weeks. But he should also not be allowed to use his own apparent recovery to suggest that, a week after testing positive for COVID-19, all is well. That assumption is as dangerous as any of the other misinformation Trump has spread.