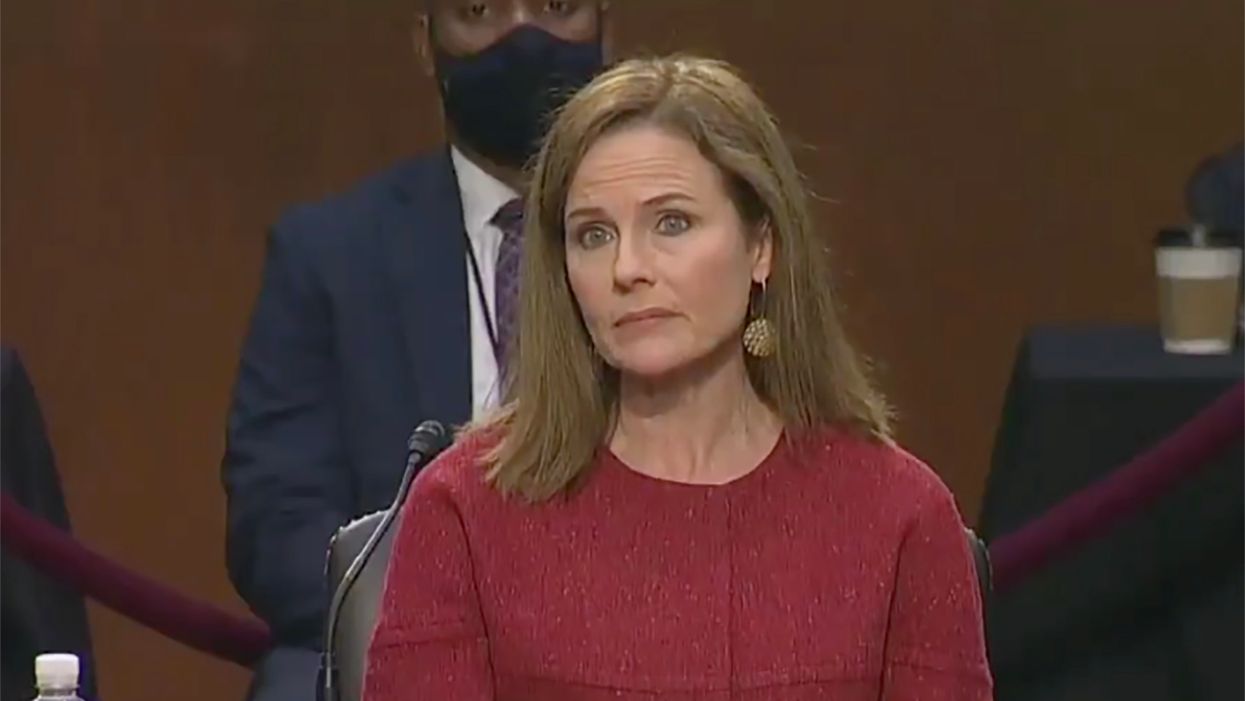 Photo via Screengrab.
The Conversation
October 25, 2020

Originalism has featured prominently in each of the last three Supreme Court confirmation battles – those of Neil Gorsuch in 2017, Brett Kavanaugh in 2018 and now Amy Coney Barrett. Each time, misconceptions about this theory of constitutional interpretation have swirled: Isn't originalism self-defeating because the Founders weren't originalist? Don't originalists ignore the amendments written after 1789? Do originalists think the Constitution applies only to horse-drawn carriages and muskets?

As a constitutional law professor, the author of “A Debt Against the Living: An Introduction to Originalism," and an originalist, I'd like to answer some frequently asked questions about originalism – and to debunk some of the myths.

Some originalists argue it's the meaning as understood by those who ratified the Constitution in the various state conventions, or the public that elected those ratifiers. Others say it's the understanding of a reasonable, well-educated reader. Still other scholars claim the Constitution is written in legal language and should be interpreted with its original “legal" meaning. With this approach, for example, the term “ex post facto laws" likely refers only to retroactive criminal laws, and not to all retroactive laws.

Although critics of originalism make much of these intraoriginalist squabbles, the reality is all of the above approaches usually lead to the same answer.

For example, if you found a recipe for apple pie from 1789, you'd interpret it with a public meaning and not with a secret or esoteric meaning that you might use to interpret, say, a Socratic dialogue. Otherwise, the recipe would be an ineffective instruction. And you'd also interpret the recipe with its original meaning, that is, the meaning its creator intended to convey.

That does not, however, mean we should follow the apple pie recipe. Maybe the recipe has some fatal defect or just doesn't meet modern tastes. In that case we can amend the recipe or perhaps abandon it. But doing so doesn't change what the recipe actually means.

The Constitution works the same way: As a public instruction, its meaning is its original public meaning. Whether and why the Constitution is legitimate and binding such that we should follow it are separate questions – questions that are deeply contested even among originalists.

Were the Founders originalists?

Some critics claim that originalism is self-defeating because the Founders themselves were not originalists. They say originalism is just an invention of the 1970s and 1980s, a reaction to judicial activism of the Warren Court (1953-1969). That is false.

All of the Founders were originalists. In 1826, James Madison wrote, “In the exposition of laws, and even of Constitutions, how many important errors may be produced by mere innovations in the use of words and phrases, if not controlled by a recurrence to the original and authentic meaning attached to them!" Chief Justice John Marshall wrote in 1827 “that the intention of the [Constitution] must prevail; that this intention must be collected from its words; that its words are to be understood in that sense in which they are generally used by those for whom the instrument was intended." Daniel Webster argued in 1840 that the Constitution must be interpreted in its “common and popular sense – in that sense in which the people may be supposed to have understood it when they ratified the Constitution." And as David P. Currie explained in his monumental study “The Constitution in Congress," between 1789 and 1861 “just about everybody" in Congress “was an originalist."

What's the difference between originalism and textualism?

Both originalists and textualists argue that the secret intent of the Founding Fathers, or the legislative intent of statutory drafters, cannot override the text's clear meaning. The Founders' and drafters' intent, however, is evidence of what they likely meant by what they wrote.

Does the originalist Constitution apply to modern circumstances?

Of course. That's why the First Amendment's protection for freedom of speech applies to the internet. It's why the Fourth Amendment's prohibition on unreasonable searches and seizures applies to GPS devices that police officers put on cars. And, yes, it's why the Second Amendment applies to more than just muskets. In other words, originalists are not bound by the original expected applications of the Constitution's text. They're bound by the original meaning of the text, and that meaning can and does apply to new and changing factual circumstances.

Are all Supreme Court justices originalists?

Justice Elena Kagan, appointed by President Obama in 2010, famously announced at her confirmation hearing that “we're all originalists now." She meant that all justices take the text of the Constitution more seriously than they used to. Only three justices, however – Clarence Thomas, Neil Gorsuch and Brett Kavanaugh – are self-avowed originalists. Justice Samuel Alito and Chief Justice John Roberts both take a more pragmatic approach, giving more weight to precedents and consequences. Justices Stephen Breyer, Elena Kagan and Sonia Sotomayor believe the Constitution can and should evolve over time.

Do originalists ignore Reconstruction? Do they reject Brown v. Board?

A more recent misconception is that originalists ignore all the amendments written after 1789, the year the Constitution went into effect. This is an odd criticism because that would include the Bill of Rights, which wasn't added until 1791. Originalists are bound by changes to the Constitution that have been properly made through the amendment process.

This is also why originalism can and does justify Brown v. Board of Education, the landmark school desegregation decision. The 14th Amendment's privileges or immunities clause – which provides that no state shall make or enforce any law that abridges the privileges or immunities of U.S. citizens – was an anti-discrimination provision with respect to civil rights under state law. If education is a civil right – and it is – then once it is acknowledged that segregation was never about equality but rather about keeping one race of Americans subordinated to another, segregated public schools obviously violate the Constitution.

Is originalism just a conservative ploy?

That brings us to the final misconception: Isn't originalism just a rationalization for conservative results? The short answer is “no." Originalists take the bitter with the sweet. They may not like federal income taxes or the direct election of senators, but they accept the original meaning of the 16th and 17th amendments on those points. Moreover, originalists often believe – whether on abortion or same-sex marriage, for example – that controversial political and moral questions should be decided by the democratic, legislative process, a process that can lead to progressive, libertarian or conservative outcomes.