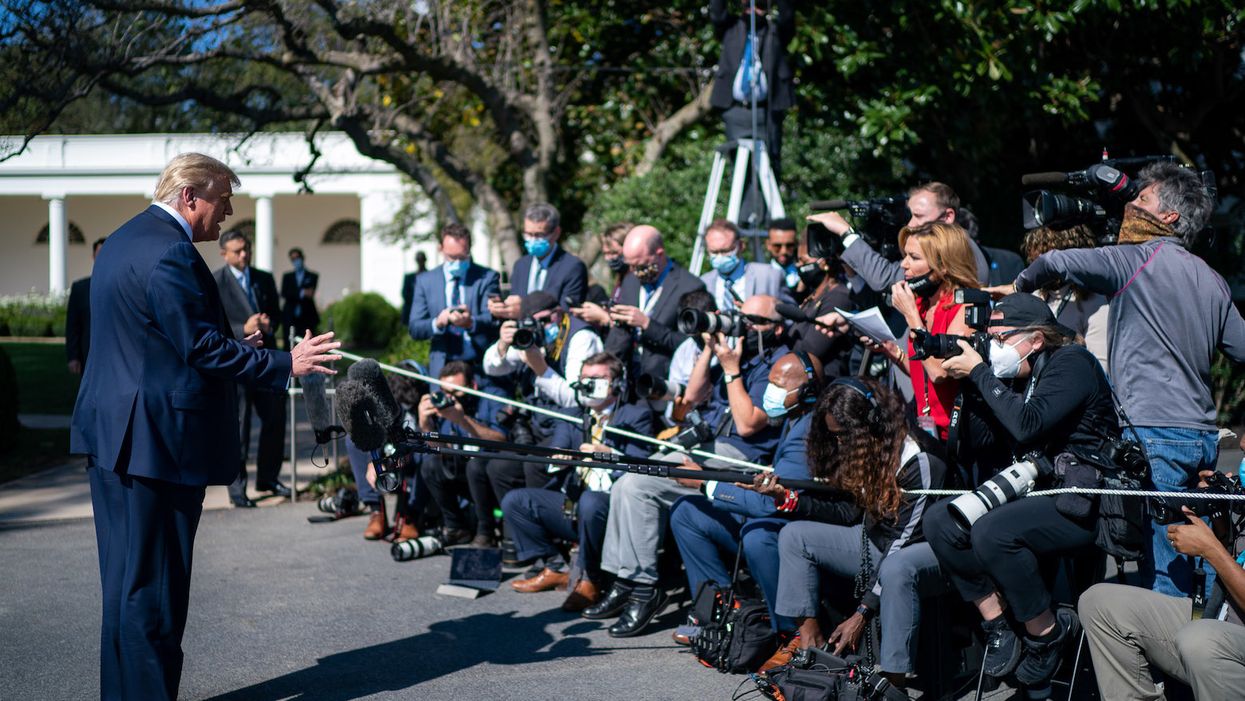 President Donald J. Trump talks to members of the press along the South Lawn driveway of the White House Wednesday, Sept. 30, 2020, prior to boarding Marine One en route to Joint Base Andrews, Md. to begin his trip to Minnesota. (Official White House Photo by Tia Dufour)
Alex Henderson
October 07, 2020

Earlier this week, Michael D. Shear — a New York Times White House correspondent who has tested positive for COVID-19 — told Axios, "My wife has now tested positive for COVID. The collateral damage is going to be pretty significant, I think." And the danger that journalists who cover the White House are facing is also evident in a decision that BuzzFeed News has made: it has removed reporter Kadia Goba from the White House press pool, citing safety concerns.

The New York Times' Katie Robertson reports that Matt Mittenthal, a BuzzFeed spokesman, "confirmed that the company, on Tuesday, had withdrawn the correspondent, Kadia Goba, from her Wednesday shift out of concern for her safety. The spokesman added that BuzzFeed News was awaiting further guidance from the White House Correspondents' Association."

Goba clearly fears that entering the White House at this point would put her at risk for being infected with COVID-19, which according to Johns Hopkins University in Baltimore, has killed more than 1 million people worldwide.

Goba told the Times, "Anyone that knows me understands I'd rather be at the White House working today, but at the same time, there are obvious concerns about working indoors during an outbreak. I don't want to be knocked out for the rest of the election because I'm sick."

Robertson notes that after BuzzFeed announced that Goba was being removed from the White House Press pool, an e-mail circulated in the press pool asking if someone would like to fill in for her. But other reporters who work in Washington, D.C. are worried as well.

In response to that e-mail, the Dallas Morning News' Washington bureau chief, Todd J. Gillman, wrote, "We are in uncharted territory. No one wants anyone to take unwarranted risk. Nor do we want the pool system to collapse."

Robertson points out that in addition to Shear, at least two other journalists who cover the White House have reported testing positive for COVID-19.

In an official statement released on Wednesday, the White House Correspondents' Association reported that dozens of tests for COVID-19 have been conducted on its members since late last week — when Trump tweeted that he had tested positive for the novel coronavirus.

The WHCA, in the statement, said, "It would be foolish of us to assume that the situation at the White House or on the campaign trail will improve dramatically over the coming four weeks. That means that we as a press corps — and each of us individually — must be clear-eyed about the potential risks of COVID exposure on the job, taking every precaution we can to fulfill our coverage obligations while being prepared for situations with which we may not be comfortable."