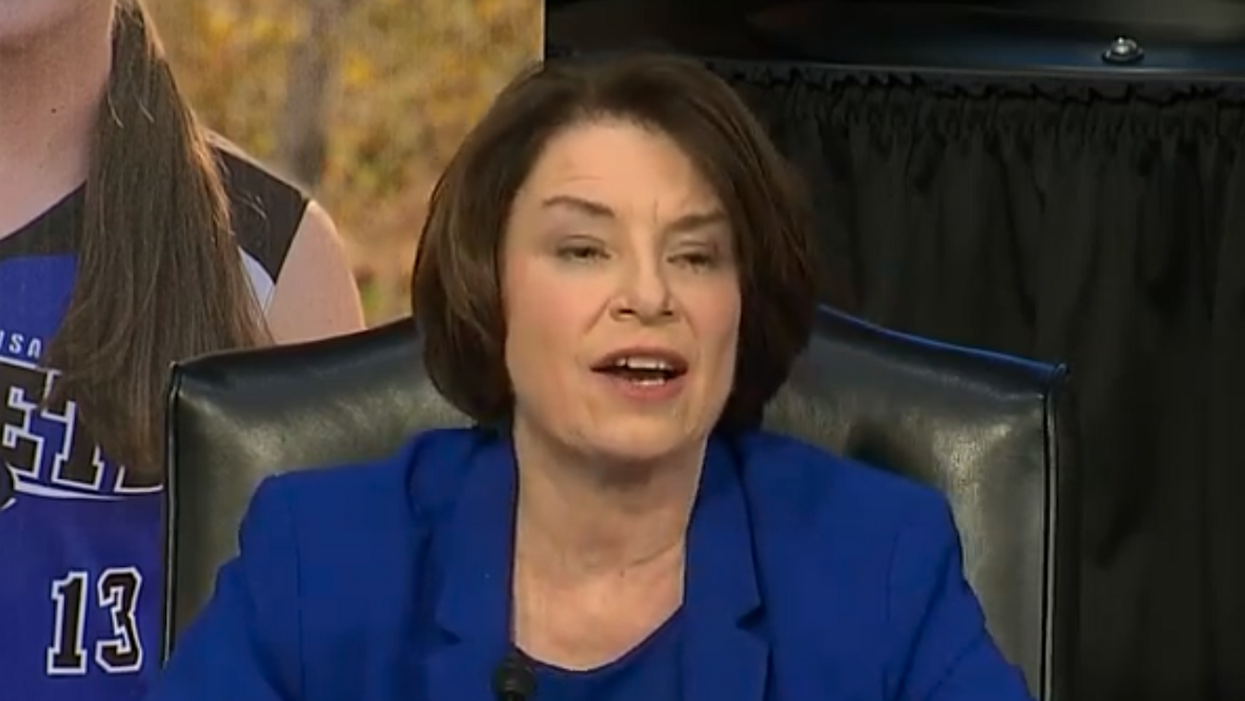 Sen. Amy Klobuchar, D-Minn., called Supreme Court nominee Amy Coney Barrett's confirmation hearing a "sham" on Monday as Democrats argued the hearing should not have been held at all.

Democrats repeatedly accused Republicans on the Senate Judiciary Committee of hypocrisy after they blocked former President Barack Obama's nomination of Judge Merrick Garland for nearly a year before trying to confirm Barrett in time for the November election. Klobuchar said during her remarks that the Senate should be working on coronavirus relief rather than trying to rush through Barrett's nomination.

"Yes Judge, I think this hearing is a sham. I think it shows real messed-up priorities from the Republican Party," Klobuchar said.

Klobuchar also cited Barrett's criticism of the Supreme Court decision upholding Obamacare, warning Americans that "your health care is on the line."

But amid her criticism, Klobuchar acknowledged there was little Democrats could do to stop Barrett's confirmation by the Republican-led Senate, urging voters to show Republicans that "enough is enough" at the ballot box.

"This isn't Donald Trump's country," she said. "It is yours."

Sen. Lindsey Graham, R-S.C., defended himself against allegations of hypocrisy after he not only supported blocking Garland's nomination but vowed to block any Supreme Court nomination by President Donald Trump in the final year of his term.

Graham argued that the Barrett nomination was different than Garland's because Democrats did not hold the Senate during Obama's second term. He went on to quote late Supreme Court Justice Ruth Bader Ginsburg to justify moving forward with the hearing."

The bottom line is that Justice Ginsburg, when asked about this several years ago, said that a President serves for four years, not three," he said. "There's nothing unconstitutional about this process."

Graham did not mention that Ginsburg's reported dying wish was that whoever wins the election choose her replacement.

Sen. Chuck Grassley, R-Iowa, who blocked Garland's nomination as the Judiciary chairman under Obama, also said in 2018 that he would not consider a Supreme Court confirmation in Trump's final year but on Monday claimed that he only meant that if he was still the chairman of the committee.

Like Graham, Grassley also quoted Ginsburg to defend his turnaround.

"Justice Ginsburg delivered a eulogy for her friend Justice Scalia. Justice Ginsburg said, 'We were different, yes, in our interpretation of written text. Yet one in our reverence for the courts, and its place in the U.S. System of governance,'" he said. "The Senate is now tasked with carrying out perhaps its most solemn duty under the Constitution. As we go through this process, we should heed Justice Ginsburg's words with a shared reverence for the Court and its place in our Constitutional system."

The Republicans defended their change of heart after polls showed that a majority of voters believe the election winner should pick late Justice Ruth Bader Ginsburg's replacement.

Sen. Dianne Feinstein, D-Calif., the top Democrat on the committee, said the Republicans "should honor" their past statements and "let the American people be heard."

"Simply put, we should not be moving forward on this nomination — not until the election has ended and the next president has taken office," she said.

"Instead of rushing to jam another ideologically driven nominee onto the Supreme Court in the middle of an election when over nine million Americans have already voted...let's end this hypocritical, illegitimate hearing – return to the urgent work we have before us," argued Sen. Mazie Hirono, D-Hawaii.

Democrats sought to frame Barrett's nomination as a political attack on Obamacare. The Supreme Court is scheduled to hear a case that could decide the fate of the health care law a week after the election.

"This Supreme Court nominee has signaled in the judicial equivalent of all caps that she believes the Affordable Care Act must go, and that the precedent protecting the ACA doesn't matter," he said. "The big secret to influences behind this unseemly rush see this nominee as a judicial torpedo they are firing at the ACA."

Sen. Dick Durbin, D-Ill., argued that because Republicans failed to repeal Obamacare in Congress "they've got to rely on the court to do their work."

"In the midst of the pandemic, the Republicans want to strike down a law that 23 million Americans rely on," he said, calling the hearing a "shameless, self-serving, venal reversal."

Democrats spoke while surrounded by photos of people they said would be impacted by the repeal of Obamacare."