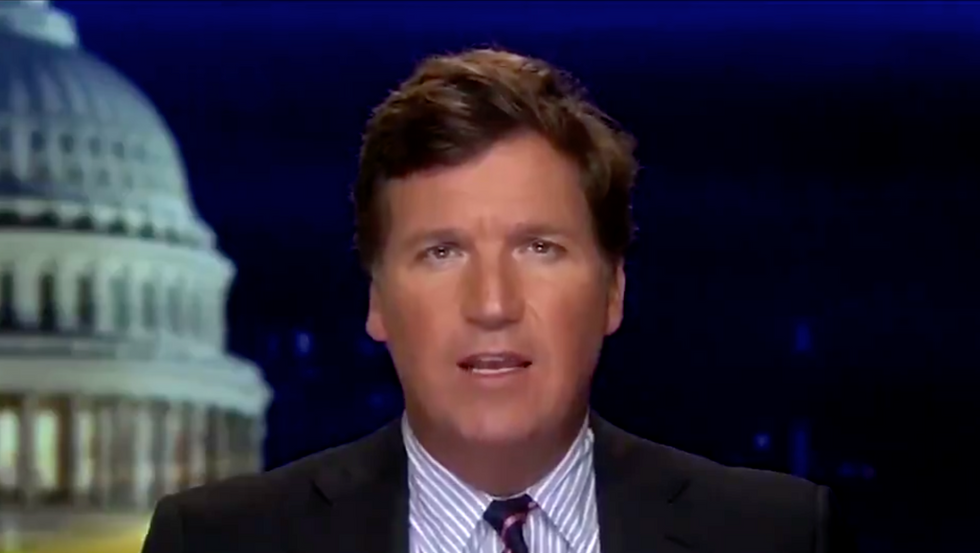 On Tuesday, Tucker Carlson broke away from his usual format of being racist against mostly Black people and Latino folks, to get racist against the country of China. In a segment that Fox News emblazoned with the chyron “Coronavirus Whistleblower talks to Tucker,” Tucker brought on Chinese virologist Dr. Li-Meng Yan to promote a debunked conspiracy theory that the Chinese government created the SARS-CoV-2 in a lab. Her theory is based on what she and three other colleagues say are telltale signs that the virus did not evolve naturally.

Yan’s theory and the report she was promoting on Carlson’s show have not been peer reviewed, and since it lacks any evidence to back it up, “evidence” she claimed during the interview but never seemed to get around to presenting, has been considered debunked for months by the overwhelming majority of the scientific community. Both Facebook and Instagram (owned by Facebook) flagged Tucker Carlson virus posts as “false information.” Twitter has followed suit, suspending Yan’s account. Tucker is freaking-out mad that the social media sites, usually complicit in the right wing’s spread of misinformation and lies, is cracking down even a little on the almost always egregious lies people like Carlson promotes.

One of the ways that Tucker attempted to sell Yan to the public was that because she is Chinese herself, she cannot be racist against Chinese people and therefore isn’t wrong about accusing the Chinese Communist Party and Chinese scientists of creating the virus because she is racist. You see how that tail gets eaten by itself? The idea that Yan and this research team found special evidence in the genome of SARS-CoV-2 is interesting since the genome has been publicly available to any scientist with access to a computer and the internet for months.

Carlson’s “interview,” forgot to mention that Dr. Yan’s not-peer-reviewed “report” was published “by two nonprofit organizations, the Rule of Law Society and the Rule of Law Foundation,” both connected to former Trump adviser and generally terrible person Steve Bannon. Forbes reports that “the four authors of the paper, Li-Meng Yan, Shu Kang, and Jie Guan, and Shanchang Hu, all have the Rule of Law Society and Rule of Law Foundation as their affiliation.” The University of Hong Kong has distanced themselves from Yan, and have contradicted her personal narrative, saying “Dr. Yan never conducted any research on human-to-human transmission of the novel coronavirus at HKU during December 2019 and January 2020, her central assertion of the said interview.”

Now, any good conspiracy theorist will tell you that you cannot trust China or the University of Hong Kong, and they would have the power and the motive to smear a scientist who was accusing them of unleashing a global pandemic. But strangely, for all of the purported “evidence,” the researchers forgot to submit their explosive findings to a legitimate scientific journal. I mean, if they had that evidence, they would win Nobels and Yan would be exonerated pretty quickly.

But this is a trumped-up conspiracy theory to distract the public from the Trump administration’s homicidal neglect of our country’s national and public health security. The hope is that in promoting China as the evil concoctors of this virus as some kind of biological weapon, Americans will make the leap to believe that there was little Trump could have done to be prepared for it. Don’t try to explain it to me.

Online, people chronicled how the Bannon right-wing machine promoted this calorie-free theory instantly, pushing it into the general consciousness, or more specifically, into the right wing’s general consciousness. Everything from the New York Post pushing the conspiracy theory based on the Carlson evidence-free interview, to Yan’s heavily edited Wikipedia page, reengineered to seem more serious and rigorous than it was previously.

It’s not a new angle. In fact, this has been the right wing’s entire propaganda gimmick for the last four decades. Say you are strong on National Security and supportive of the troops, while cutting back on social services and military health services that directly impact them and us. Promote that conservatives are fiscally responsible, while blowing out the deficit every time they are in a position of power. It has been effective as the majority of Americans believe that social media companies are censoring people, and most of the people screaming about being censored are right-wing websites with enormous amounts of traffic, or conspiracy-theorist hucksters. Sadly, our country’s inability to think critically is an enormous problem.

The work that needs to be done is hard work. The answers are not implemented easily. You don’t get to just post blame on something and then fold your arms and say it shouldn’t be this way. It is this way and solving the issues take work.

If you want you can watch the fact-free interview with Yan below.