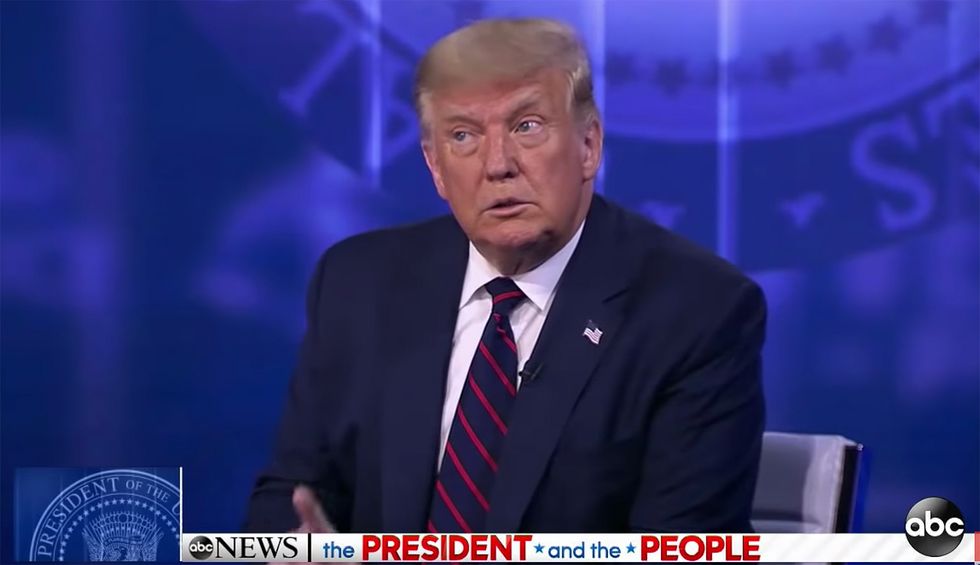 On Tuesday evening, someone at the Trump campaign thought it would be a great idea to have Donald Trump sit down with some regular Pennsylvania folks and answer some questions at a “town hall” conducted by ABC News.  While the session touched on a number of topics, both the people and the audience and host George Stephanopoulos kept returning to Trump’s handling of the COVID-19 crisis that has left 200,000 Americans dead and close to 7 million known to be infected.

Asked about his handling of the virus, Trump denied that he could have done anything more. Then, incredibly, he denied that he had ever downplayed the deadliness of COVID-19 just days after admitting that he had. In fact, Trump claimed, “I actually, in many ways, I up-played it, in terms of action. My action was very strong.” That action being Trump’s pointless and incomplete ban on travel to China. Trump also, of course, referred to COVID-19 as “the China virus” as a reminder that racism is always high on his agenda. Trump insisted he was “starting to get very good marks” on the handling of the pandemic, without describing who gave these marks, or even what they meant.

When Stephanopoulos seemed incredulous, Trump again insisted that the virus would go away over time. “It’s going to be herd developed, and that’s gonna happen,” said Trump. Not even thirty seconds after claiming he had “up-played” the virus, Trump was downplaying it again.

Trump then claimed that he had “closed up the country” and “saved two, maybe two and a half, maybe more than that, lives” and said “I don't know if that's been recognized.” Presumably Trump meant to say millions of lives, but it doesn’t matter because he never shut down the country, or anything, at all. It was governors who gave orders to impose restrictions in states, with Trump fighting them all the way.

As people in the audience got their chance at the microphone, Trump proved utterly incapable of delivering a straight answer—and in some cases, of giving any answer—to the concerns people were facing. The first person up identified himself as a Republican and Trump supporter, but also a diabetic who was worried about COVID-19 and who had become disillusioned by the way Trump began pressing for states to reopen even as cases were increasing, then followed up by dismissing the effectiveness of masks. "Why did you throw vulnerable people like me under the bus?" asked the voter. Trump denied that he had, and began talking about ventilators … which had nothing to do with the complaints of the speaker, who was disgusted at having to “dodge” Trump supporters who refused to wear masks or follow guidelines.

Trump went on to claim that he was “far ahead of Biden” in his response to COVID-19 … ignoring the fact that Biden had published an op-ed on the seriousness of the situation in January and produced a plan in February. Instead, Trump claimed, that Biden “was talking about, in March, about, it's totally over-exaggerated” and that “Nancy Pelosi was standing in the streets of Chinatown in San Francisco, late, a month, more than a month after that, saying this thing's totally exaggerated, come." On the Biden front, it’s simply a pure lie. On the Pelosi front, it’s a lie mixed with a double-helping of racism, because Trump was implying that the virus didn’t just originate in China, but was spread by Chinese Americans.

Trump’s answers during the debate weren’t just awful, and weren’t just riddled with lies, they were nonsensical. The “herd mentality” statement is not only a fantastic description of Trump’s followers, it’s exactly the kind of statement that, had it been made by Joe Biden, would be the subject of a thousand “does he have dementia?” headlines.

Trump made up claims that Biden and Pelosi downplayed the pandemic, which they never did. Trump claimed that he had “shut down the country,” which never happened. He claimed he had never downplayed the pandemic, and then downplayed it repeatedly. And he claimed that he had saved two million people, before going on to say that we could just let the nation run to “herd mentality” which would presumably kill those same two million.

Right now, Fox News is surely praising his performance. Because America already has way too much herd mentality, and it’s not saving us from anything.