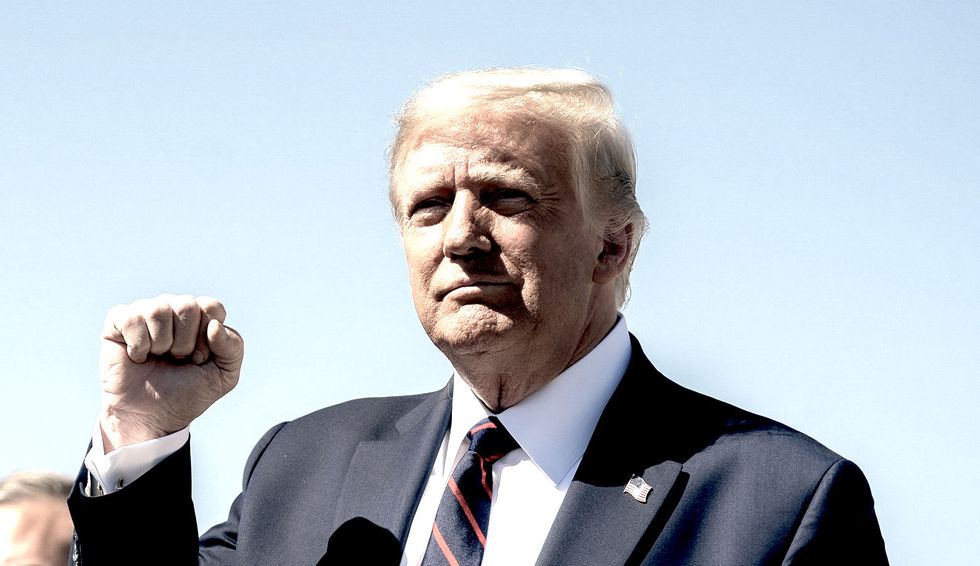 President Donald J. Trump gestures with a fist-pump as he disembarks Air Force One at Wilkes-Barre Scranton International Airport in Avoca, Pa., Thursday, August 20, 2020, and Is greeted by guests and supporters. (Official White House Photo by Tia Dufour)
Salon
September 06, 2020

The week before last, we watched Americans respond to the altar call at the church of white masculinity. During the Republican National Convention, speakers humbly prostrated themselves at the foot of white masculinity, arguing that the rejection of a white male savior would be our ruin. The disciples of white masculinity preached that feminists were coming for the unborn, the LBGTQIA community was coming for our children and racial minorities were coming for the rest of us. Furthermore, the RNC paraded women and speakers of color to state that President Trump was not racist, he was right —and those who refused to convert were deviants seeking the destruction of the nation.

This altar call is not much different from Rudyard Kipling's "The White Man's Burden" or D.W. Griffith's "Birth of a Nation," which both portrayed white men as the saviors of civilization. Today it manifests itself in the sanctification of white men who embrace their privilege with religious zeal. In Rep. Ted Yoho's flaccid apology for verbally abusing Rep. Alexandria Ocasio-Cortez, he cloaked his attack in holiness, stating, "I cannot apologize for my passion, or for loving my God, my family and my country."

The disciples harken back to a perceived golden age of America, when the racial and gender power structure were correctly set, before the chaos caused by the recognition of the rights of racial minorities, women and the LBGTQIA community. This threat to white masculinity has intensified with the election of the nation's first Black president, a female speaker of the House, a Latina on the Supreme Court, marriage equality, the MeToo movement, and the possibility of a female president. The alt-right and neo-Nazis embody these fears, arguing that white America is losing to immigrants and racial minorities and questioning the manhood of any white people who criticize them.

A 2016 PRRI/Atlantic survey finds a quarter of whites (24.9%) believe that diversity has come at their expense and that society has become too soft and feminine. Further, 93.1% of whites who agree with both of those statements reported voting for Trump. More than a third of white evangelicals (35.6%) agreed with both statements, followed by less than a quarter of white Catholics (23.7%) and mainline Protestants (23.1%).

As ordained bishop of the church of white masculinity, President Trump has attempted to impose his masculinity by questioning the masculinity of his male opponents and showing disgust for his female adversaries. In the face of a call for social justice, the president has sacrificed free speech at the altar by dispatching federal officers and troops to stop peaceful protesters in Lafayette Park for a photo-op in front of St. John's Church. He proclaimed the sanctity of his white masculinity by rebuking the suggestions of scientists and downplaying the harm of the COVID-19 virus. He resisted wearing a mask to show the world his strength. In suit his followers have harassed protesters and questioned the masculinity of those who take precautions against the virus.

The actions of Trump and his worshippers, among most other Americans, are considered deplorable. At the church of white masculinity, these behaviors are saintly.