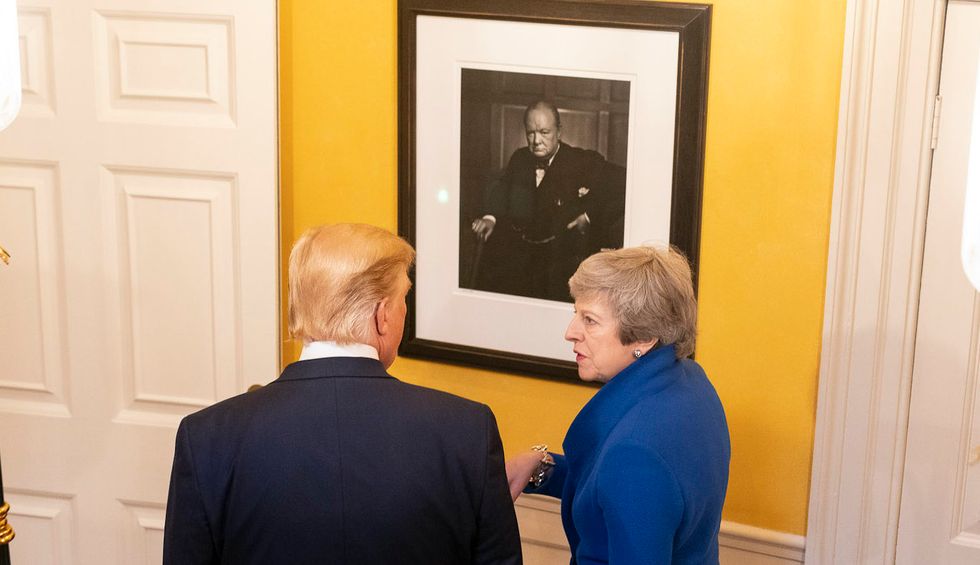 Oh boy, Donald Trump's delusions of grandeur and his pattern of pathological lying have come crashing together once again. This time, Trump is trying to defend himself in the face of journalist Bob Woodward's audio recordings revealing that while Trump was minimizing the threat of the coronavirus in public, in private he knew full well how serious the dangers were. And his strategy is — wait for it — to compare himself to Franklin D. Roosevelt and Winston Churchill.

On Thursday night at a campaign rally in Freeland, Michigan, Trump insisted that when he told Woodward, "I wanted to always play it down," he was just channeling the strength of these historic leaders of the Allied powers during World War II.

Trump compared his public lies about the seriousness of the pandemic to FDR's famous "fear itself" quote and falsely claimed that Churchill gave speeches from the rooftops when "Hitler was bombing London."

Who among us can forget when Churchill reassured the British public that "one day ... like a miracle" the Nazis "will disappear"?

Or when FDR, in addressing the nation after the Pearl Harbor attacks, insisted that "99%" of the bombings were "totally harmless" and fears about the spread of fascism were a "new hoax" perpetuated by shady deep-state conspirators?

Jokes aside, it's obviously preposterous of Trump to try to make this claim. As numerous commenters pointed out, whatever flaws Churchill and Roosevelt may have had, they were big proponents of rallying their countries in the face of severe adversity by telling the public the truth about the seriousness of the situation. They certainly did not lie about things constantly or look for ways to hide the true nature of the problem.

In fact, in Roosevelt's famous "fear itself" speech, which Trump referred to, Roosevelt literally also said, "This is pre-eminently the time to speak the truth, the whole truth, frankly and boldly. Nor need we shrink from honestly facing conditions in our country today."

But while Trump has nothing in common with either Roosevelt or Churchill, he does resemble another prominent figure from the era quite a bit: Charles Lindbergh, the famed aviator who spent the months before the U.S. joined the war aggressively campaigning for America to hide its head in the sand, Trump-style, and avoid facing the real threat of fascism head on.

Trump's Michigan rally came very close to the 79th anniversary of Lindbergh's famous 1941 speech in Des Moines, Iowa, in which he accused "the British, the Jewish and the Roosevelt administration," as well as "Communists" and "intellectuals," of being "war agitators" who have "marshaled the power of their propaganda, their money, their patronage" to frighten Americans into joining the fight against Hitler and the Nazis.

To make matters worse, Lindbergh asserted that the "greatest danger to this country" lay in what he called the "large ownership and influence in our motion pictures, our press, our radio and our government" of "the Jewish people."

Trump has not peddled overt anti-Semitism (though he has dabbled in its coded forms), and seeks to present himself as an ally of Israel and the Jewish community. But the general themes of Lindbergh's speech downplaying the threat of fascism closely match Trump's arguments about the coronavirus.

As the New York Times reported on Feb. 28:

Mr. Trump said that news outlets like CNN were "doing everything they can to instill fear in people," while some Democrats were "trying to gain political favor by saying a lot of untruths." His acting White House chief of staff, Mick Mulvaney, went even further, telling conservative activists that journalists were hyping the coronavirus because "they think this will bring down the president; that's what this is all about."

It's the same accusation that Lindbergh leveled at Democrats and the media in 1941: They're inventing this threat for nefarious political gain, and you'd be a fool to fall for it.

Of course, for Lindbergh to ascribe ulterior motives to Roosevelt and "the Jewish people" was in all likelihood a form of projection. There's significant evidence that Lindbergh's wasn't opposed to the U.S. entering the war because he was a principled pacifist, but because he had fascist sympathies.

Lindbergh was part of the "America First" movement, which may have started as a pacifist tendency, but was soon overrun by people who didn't want to go to war with the Nazis because they rather liked them. Lindbergh's official line was that it was none of America's business if Europeans wanted to kill each other, the ulterior motives kept peeking through.

Most infamously, Lindbergh was presented with the Service Cross of the German Eagle by Hermann Göring in 1938. While Lindbergh found the Nazis' tactics against what he called their "difficult Jewish problem" distasteful, he still maintained an admiration for Hitler's government and wrote, "We should be working with them and not constantly crossing swords."

Basically, Lindbergh hated the idea of white people fighting other white people, saying they should instead "band together to preserve that most priceless possession, our European blood" and save their powder for the fight against "dilution by foreign races."

(Yes, Trump adopted "America First" as a slogan in his 2016 campaign, either because he wasn't entirely aware of the history or because he really enjoys seeing how many head-nods toward fascism he can get away with. Quite likely a little of both.)

Similarly, Trump's ulterior motives for downplaying the threat of the coronavirus have never been far below the surface: He thinks the pandemic and the economic collapse, which have both been made significantly worse by his callous and cruel mismanagement, hurt his chances at re-election. That's why he has openly mused about simply preventing people from getting tested, clearly believing that would make it easier to deny the virus is a problem in the first place.

To this end, Trump has heavily promoted conspiracy theories accusing shadowy forces of exaggerating the threat of the coronavirus and withholding effective treatments in a deliberate attempt to tank the economy and, of course, deprive him of his beloved campaign rallies. The idea is to paint people who take this disease seriously as having narrow and sinister motives, and to deflect attention from the fact that he's clearly the one operating in bad faith.

Lindbergh was scheduled to give a speech at an America First rally on Dec. 10, 1941, but it was pre-empted by the Japanese attack on Pearl Harbor three days earlier. That was after Lindbergh had assured audiences the previous year that "no nation in Asia has developed their aviation sufficiently to be a serious menace to the United States at this time." His confidence was no doubt due to his overtly racist belief that aviation was "a tool specially shaped for Western hands" and "one of those priceless possessions which permit the White race to live at all in a pressing sea of Yellow, Black and Brown."

(It's tempting to compare Lindbergh's views with Trump's ludicrous statements about how desegregation and anti-discrimination policies pose a threat to the "Suburban Lifestyle Dream," but this article is about the pandemic and I want to stay focused.)

Lindbergh's racist efforts to pooh-pooh the threat of Japanese air power failed the reality test in dramatic fashion, just as Trump's various efforts to pooh-pooh the severity and contagiousness of the coronavirus has run up against the incontrovertible fact of 192,000 dead, and counting, as of Friday morning. (Just by way of reference, that's roughly 83 times the number of Americans killed in the Pearl Harbor attack.)

At this point in our history, we can see where Lindbergh and Trump diverge: At least Lindbergh was chastened enough by Pearl Harbor to shut up. He even tried to re-enlist in the Army Air Corps, but was rebuffed by the Roosevelt administration, although he later flew about 50 combat missions in the Pacific as a civilian consultant. Trump, on the other hand, continues to cling to the hope he can bamboozle voters into believing that this coronavirus thing is no big deal and will go away any day now.

A couple of weeks ago, Twitter removed a tweet Trump had promoted that falsely claimed 94% of coronavirus deaths were falsified. Despite allowing himself, reluctantly, to be photographed in a mask a couple of times after spending months mocking people who wore them, Trump was back at it again on Tuesday, refusing to wear a mask at a North Carolina rally and making fun of restrictions on crowd size. At his Thursday rally in Michigan — where few people in the packed crowd wore masks, telling reporters it was a "fake pandemic" and that "the Good Lord takes care of me" — Trump asserted that the U.S. was doing great on the pandemic "relative to other countries and other parts of the world."

As you probably know, this is a blatant lie: The U.S. has more COVID-19 cases than any other country in the world.

Perhaps the difference between the two men is that Lindbergh, as despicable a person as he may have been, became famous for doing something that required courage, intelligence and skill, which was to become the first person to fly an airplane across the Atlantic Ocean.

Trump, on the other hand, has spent his life bouncing from one failed venture to another, cheating and grifting to create the illusion of enormous wealth and great success. And so while Lindbergh eventually had to concede reality, Trump will never quit believing he can flim-flam his way through this crisis, no matter how many corpses pile up in his wake.