Trump team sought to water down and block CDC warnings of pandemic's danger to US children: emails 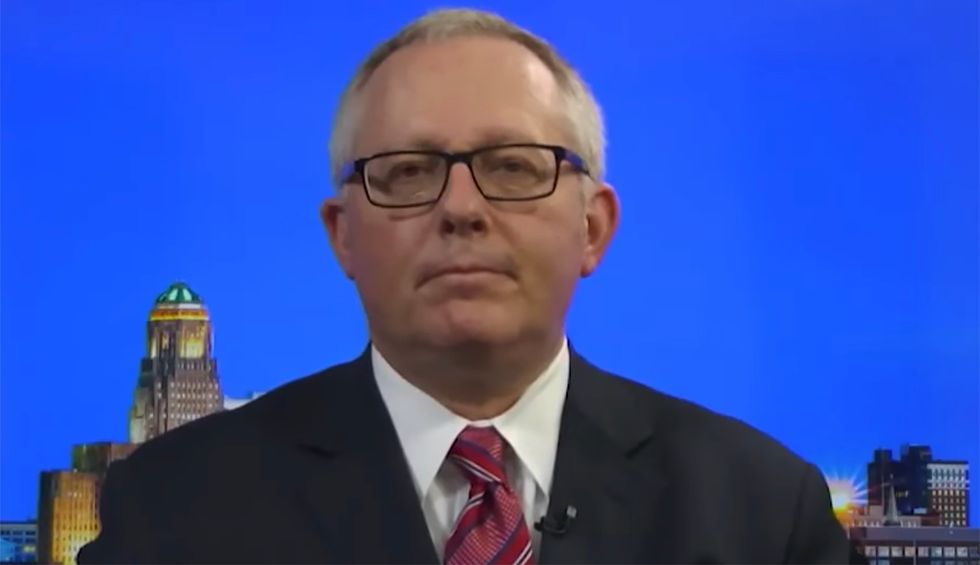 On Friday, Politico broke a story since confirmed by The New York Times and The Washington Post: Trump Health and Human Services appointee Michael Caputo and his aides have been continuously interfering with, either demanding alterations to or holding up publication of, the Center for Disease Control's Morbidity and Mortality Weekly Reports. This follows a Politico report on Caputo's appointed senior "adviser" (Caputo, the appointed assistant secretary for public affairs, hired his own "adviser" to vet CDC science and public statements) Paul Alexander weighing in—in harsh, partisan, and conspiratorial terms—in emails to career CDC experts.

Michael Caputo is a conspiracy crank who has already been identified as reaching deep into HHS to attempt to enforce loyalty to Trump's proclamations and false statements. That he and Alexander have specifically attempted to insert themselves in the Morbidity and Mortality reports, CDC products intended to update the nation on the nonpartisan medical facts, on the pandemic and everything else, is another sign of how corrupted—and how cultish, conspiracy-minded and authoritarian—the nation's government continues to become.

Politico reports that Caputo and Alexander have made efforts to "add caveats" to CDC findings, "retroactively change agency reports that they said wrongly inflated" pandemic risks. Most alarming, however, is Alexander's apparent partisan ranting at the CDC career staff, rantings that very strongly suggest Alexander is a conspiracy crank on order of, if not worse than, Caputo himself.

In late August, reports Politico, Alexander emailed his "vehement" disagreement with what Dr. Anthony Fauci planned to tell an interviewer about the spread of COVID-19 in schools and in universities. "I continue to have an issue with kids getting tested and repeatedly and even university students in a widespread manner … and I disagree with Dr. Fauci on this. Vehemently."

Alexander also demanded, of Fauci's press team, that they "ensure Dr. Fauci indicates masks are for the teachers in schools. Not for children. There is no data, none, zero, across the entire world, that shows children especially young children, spread this virus to other children, or to adults or to their teachers. None. And if it did occur, the risk is essentially zero."

This is a familiar refrain, from inside the Trump camp—but as plenty of evidence now demonstrates, it has been a vicious hoax. Children absolutely do transmit COVID-19 to other children and to adults. Alexander appears to either be lying outright or astonishingly uninformed. Politico even reports that Alexander added "without evidence," in the email, "that children take influenza home, but not the coronavirus."

At the time of Alexander's demand, the CDC was in possession of evidence proving peer-to-peer and peer-to-adult transmission among children. Not only did CDC experts rebut Alexander's claims with published studies, but a CDC report issued one month earlier demonstrated such transmission, taking evidence from an outbreak at a Georgia summer camp.

There's no way Alexander was unaware of that report. The report had itself been delayed, by Caputo and Alexander, in part because Alexander launched into an email tirade about its findings, making the conspiratorial claim that it was an attempt to sabotage Trump's administration.

"CDC to me appears to be writing hit pieces on the administration. CDC tried to report as if once kids get together, there will be spread and this will impact school reopening. … Very misleading by CDC and shame on them. Their aim is clear."

The sheer incompetence of Alexander's claims "disagreeing" with Fauci on the need for testing of school and university students was already self-evident at the time he made those objections known, and has been demonstrated in now-famous cases ever since. The nation is awash with university decisions to reopen that university administrators had to hastily scramble to cancel, shifting back to remote learning, after the immediate discovery of campus outbreaks. Ditto, for high schools and other schools: Not only is it self-evidently false that there is "essentially zero" risk to students, teachers, and parents from COVID-19, it is—and was—delusional bullshit.

Caputo and Alexander have been vetting CDC science and declaring that the science represents "hit pieces" on Trump when the science disagrees with whatever Trump last blurted out, or when the science presents an inconvenience to the administration's past statements. It is authoritarian nonsense.

In blocking those reports and pushing nonsensical, false claims at odds with the known science, Caputo and Alexander have undoubtably murdered Americans who ought to be alive right now.

We cannot become immune to this. The radicalization of all government departments, the purging of watchdogs, firing of inspector generals, the incessant claims that news that upsets conservative Republican claims is a conspiracy, by government experts or by the press, to harm Dear Leader and his associates—it is anti-American. It is authoritarian gibberish, of the most venal and stupid and pathetic sort. Whatever meager qualifications Trump's appointees and sub-appointees once held are rendered void, the first time they pronounce measurable reality to be a partisan conspiracy against them.

The number of ways Trumpism has betrayed the country is becoming uncountable. It has not just one death toll, but many. And in the new mantras declaring that even the election itself cannot now be trusted, not if it is bending against Donald, they are moving into a final fascist gamble.