Remember the GOP Tax Scam? Have you noticed that neither Donald Trump, nor any the Republicans who voted for it, are out on the campaign trail touting the single major piece of legislation that resulted from their party's two-year trifecta—when Republicans held the presidency alongside majorities in both houses of Congress? That says everything about how they operate. Their entire politics are bait-and-switch.

The bait, especially with Trump—although he's far from the first Republican to follow this blueprint—is screaming about Black and brown people. The switch is what they actually spend their political capital on. In Trump's case, it was the Rich Man's Tax Cut of 2017. As the latest data—analyzed by David Cay Johnston—demonstrates, that tax scheme overwhelmingly benefited the people who needed the least help.

Johnston laid out the information in great detail, but here are the guts of it: "The Trump/Republican tax savings were highly concentrated up the income ladder with hardly any tax savings going to the working poor and only a smidgen to the middle class." Gee, no wonder Trump isn't crowing about that tax cut at his rallies.

As for the pre-COVID-19 economy under Trump, more broadly? Again, the record is not a good one.

The first data showing how all Americans are faring under Donald Trump reveal the poor and working classes sinking slightly, the middle class treading water, the upper-middle class growing and the richest, well, luxuriating in rising rivers of greenbacks….More than half of Americans had to make ends meet in 2018 on less money than in 2016, my analysis of new income and tax data shows.

Johnston found that households earning less than $50,000 saw their overall incomes drop by an average of $307 per household between 2016—the last year of President Obama's second term—and 2018—the first full year the Trump Rich Man's Tax Cut was in effect. That's just under 87 million Americans. I loved Johnston's plain-spoken summary of the situation: "That 57% of American households were better off under Obama contradicts Trump's often-repeated claim he created the best economy ever until the pandemic."

So The Man Who Lost The Popular Vote's big fat cat tax cut did nothing for the middle or working classes. What did Trump do in that case? Promise to pass one that will, of course. In January, he assured us we'd have the details in 90 days. "We're talking a fairly substantial ... middle-class tax cut," said the Orange Julius Caesar. In February, the White House talked about a "Tax Cut 2.0," and Treasury Secretary Larry Kudlow mused about how "we'd love to have a 10% middle-class tax cut."

When might we see it? Will they stick to the target date of 90 days? Not so much, according to Kudlow: "It will come out sometime in September." Well, folks, September is almost over.

Whatever you can say about Trump, he's a good enough marketer to know you can't sell a loser. And his 2017 tax scheme is one. The most recent polling we have on it comes from the spring of 2019, and it's not pretty. 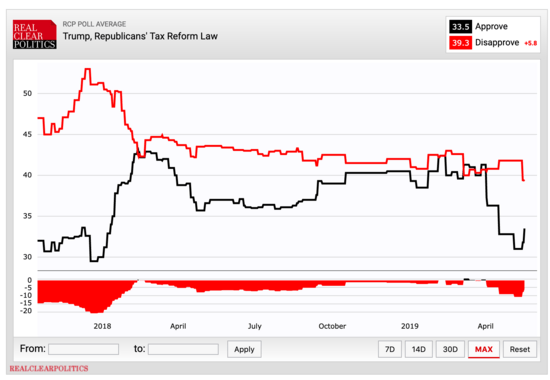 Gallup did its own poll, and reviewed some other contemporaneous, high-quality surveys. Here's what they had to say at the end of April 2019:

The 2017 Tax Cuts and Jobs Act (TCJA) is not turning out like President Donald Trump and the Republicans hoped it would -- at least, based on the public opinion data we have to date. Americans remain more likely to disapprove than approve of the law, with 40% approval and 49% disapproval in Gallup's latest update. Other recent polls confirm that the tax reform law is viewed more negatively than positively -- including surveys conducted by the Pew Research Center (36% approve/49% disapprove), Monmouth University (34% approve/43% disapprove), and Economist/YouGov (34% support/40% oppose).

Even though they rarely, if ever, tell the truth about it on the campaign trail, the one thing you can always count on Republicans doing when they get their hands on power is sending more and more money up the economic ladder, through changes to the tax code. That's what they did under Ronald Reagan—when he had a Republican Senate and effective control of the House, thanks to conservative "Boll Weevil" Democrats siding with the GOP. They did it again under George W. Bush, and once again under Trump. And Since Republicans can't actually run on their record of passing tax cuts for the rich, they come up with other "wedge" issues.

Trump is doing exactly that with his own special brand of turbo-charged race-baiting. Let's help Joe Biden and Kamala Harris, as well as Democrats all over the country, make sure the American people have the facts about who is really on their side.

Voting alone is not enough. Can you get 10 friends who live in battleground states to commit to vote for Joe Biden? Sign up to become a vote mobilizer with MoveOn's Mobilize to Win campaign, and use your personal network to help fuel a big blue wave of record-breaking turnout.