'This is how you normalize a madman': Scholars and press watchdogs urge corporate media to treat Trump like the authoritarian threat he is 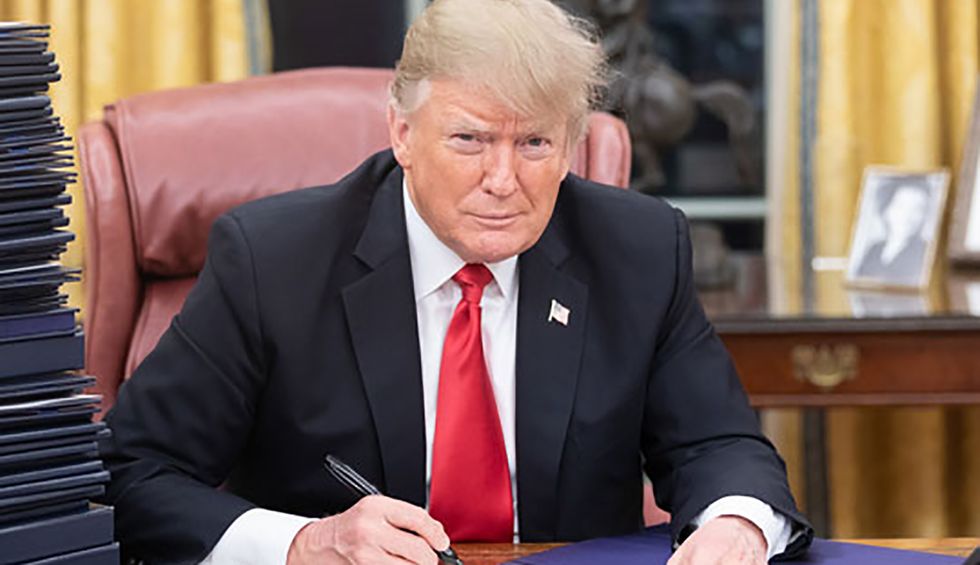 Major news outlets failed the American people, critics say, when they chose to bury coverage of President Donald Trump's Wednesday comment that he would not commit to a peaceful transition of power—a statement watchdogs say demanded above-the-fold, front-page headlines that simply did not materialize.

"Newsroom leaders made a considered, intentional decision not to panic after Trump was elected," Dan Froomkin, editor of PressWatchers.org, wrote in a scathing rebuke of corporate media's apparent nonchalant attitude towards the president's rhetoric. "This was an epic, obvious mistake, and everything that has happened since was in some sense entirely predictable."

Froomkin continued, "They should have gone on a war footing—and by that I don't mean a partisan war against Trump, I mean a journalistic war against lies, ignorance, and intolerance."

Critics weighed in on the relative non-importance corporate news outlets assigned—in print and online—to Trump's latest suggestion that he may not cede the office of the presidency should he lose in November:

Some observers balked when Peter Baker, chief White House correspondent for the New York Times, attempted to explain away the Times' decision to bury the news by citing print publication deadlines. One pointed to the late-evening news of Supreme Court Justice Ruth Bader Ginsburg's death last week, which was an above-the-fold feature in the next day's Times print edition.

Broadcast media also drew rebukes for its lack of emphasis on Trump's veiled threat at the democratic process.

"Wednesday's network evening newscasts on ABC, CBS, and NBC were no better," Eric Boehlert, founder and editor of PressRun wrote. "Not only did none of them lead with Trump's stunning proclamation, none of the broadcasts even reported on Trump's comments. This is how you normalize a madman. (CNN and MSNBC did a much better job covering the transfer-of-power story.)"

At PressWatchers.org, Froomkin explained how the dynamics in corporate newsrooms have led to complacency among journalists tasked with reporting on Trump's presidency:

One overarching problem is that our major newsrooms have simply gotten so corporate and even-keeled that our top editors value unflappability as a signal virtue. (OK, I admit I take this one a little personally, being a flappable person. A top Washington Post editor once called me "hysterical.") Flappable people don't rise through the ranks. Corporate people do.

Journalism to me is about crusading for the truth. But the notion that a serious, major news organization would pursue a crusade on behalf of its community is considered hippy shit by the people in charge these days. So is consistently standing up to a lawless con man. They've gotten used to printing lies. They barely squawk when Trump calls them the "enemy of the people." They have their algorithms, and they won't give them up no matter what. They just continue to "do the work."

So yeah, their news souls are dead. There, I said it.

Lawmakers and progressive advocates called out the dangerous threat to democracy uttered by the commander-in-chief—and the corporate media for treating it like any other day in Trump's scandal-laden presidency.

"Great (not) to watch journalists reporting Trump's latest direct attacks on the republic as if it's all just a regular press conference," longtime journalist Dan Gillmor tweeted Wednesday. "Historians will see Big Journalism's business as usual in this emergency as one of the proximate causes of the American republic's death."

Sanders also outlined steps necessary to prepare the American public and lawmakers for chaos of election night and beyond, calling on the news media specifically to "prepare the American people to understand there is no longer a single election day and that it is very possible that we may not know the results on November 3."

"But as usual, to capture the real drama of what's going on, you have to go to the opinion writers—and the editorial cartoonists," he wrote, sharing a link to an op-ed by Washington Post columnist Greg Sargent.

"What really matters here is that Trump is making an actual declaration of intent," Sargent wrote, "not just to refuse to respect the outcome, but rather to try to cancel and override it, if he is able to get away with it."

Trump isn't running for re-election in the sense he's hoping to accumulate more voter support than Biden. (His campaign keeps taking down ads in swing states.) Trump's running to maintain power. He's signaling that he'll refuse to give it up and will not accept his defeat as being legitimate. He's trying to steal an election. In reality, he doesn't care what the results are—he has no intention of abiding by the nation's will, and thinks he can count on the corrupt support of the GOP, the Department of Justice, and the United States Supreme Court to win his lawless battle in the days and weeks after the election.

"Our democracy is at stake," Boehlert concluded. "Trump is trying to steal an election, and the press should say so, every day until Election Day."