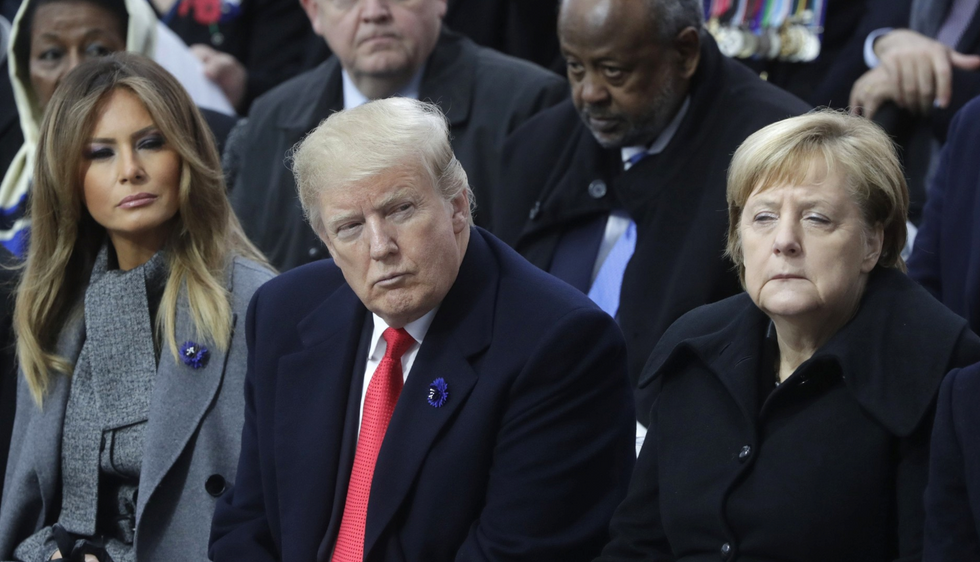 Donald Trump’s response to handling COVID-19 is the worst in the world. The United States both tops the charts in the number of cases, and before Trump can claim that this is because there’s “too much testing,” it worth noting that the U.S. also beats all comers when it comes to deaths. With the U.S. sadly set to cross the 200,000 deaths line in the coming week, it’s far ahead of even Brazil, where would-be Trump Jair Bolsonaro has done seeming everything possible to spread the disease.

As we learned over the past week, Trump’s failures to address COVID-19 were not a matter of ignorance and incompetence—though Trump has plenty of both. Instead he deliberately withheld facts from the public, downplayed the threat of the virus, and encouraged people to return to normal activities even though he absolutely knew his words were putting people at risk. This information only compounds the crime first identified back in July, when it was made clear Trump had purposely halted plans for a national network of testing centers under the belief that more people would died in states with Democratic governors so he “could blame those governors, and that would be an effective political strategy.”

What Trump has done with COVID-19 isn’t incompetence, it’s malfeasance. And it’s something that absolutely, positively, did not have to happen. So what would it be like if the United States had been managed competently? How many people might really have been saved?

Some months ago, I posited an alternative history in which President Hillary Clinton approached the threat of pandemic with honesty and vigor, greatly reducing the number of U.S. deaths and bringing the entire outbreak under control by mid-July. That, of course, is a (heartfelt) fantasy. It’s impossible to know just how well Clinton would have managed the pandemic, though it is absolutely safe to say that it would have been many times better than Trump because she isn’t a homicidal narcissist willing to kill mass numbers of Americans out of belief it would produce a bump in the polls.

But if we can’t really reference the coronavirus-fighting actions of President Hillary, where can we go for a reasonable look at what could have been? This is more than just an exercise in wishful thinking. It’s critical for one important point that the nation needs to face: Just how big is the scope of Donald Trump’s crime?

A reasonable approach might be simply to check on how Trump has done versus other world leaders. For example, the entire European Union, including the U.K., had recorded 183,920 deaths as of September 12, a number that at first glance is not much less than the 197,675 logged by the United States. Except .. the population of the E.U. (with U.K. included) is 513 million people, compared to the 327 million in the United States. If the rate of deaths in the United States had been the same as that of the E.U., 80,000 Americans that have died would still be around.

And even that is not really a fair comparison. After all, nations like Italy were hit hard and early, at a time when it wasn’t well understood that the disease had not only escaped from China, but was rapidly moving through the local population.

Here’s how things would look if the situation in the Untied States had been handled by some other world leaders.

Had Donald Trump managed COVID-19 in the United States as well as Jacinda Ardern has managed the disease in New Zealand, the total number of U.S. deaths would now be less than 1% of what they actually are under Trump.

But maybe that’s not realistic. After all, countries like New Zealand and Australia are isolated and easier to close off to outside travel. On the other hand, that’s not true of either Greece or South Korea. In fact, South Korea faced a major outbreak of COVID-19 weeks ahead of most of the world. Their experience showed exactly the kind of hotspots that might be expected from social gatherings and how quickly the disease could spread from a single center to kindle more outbreaks in additional areas. South Korea provided all the lessons available to address the threat—and if Donald Trump had followed the same path, COVID-19 would be contained, schools would be safely open, and fans would be cheering the return of college football.

From these numbers, it’s possible to see that some leaders did an extraordinary job of testing, isolating cases, and containing the virus in their nations. These leaders prevented the spread of the disease to less than 0.1% of the population. That low rate of infection meant that their national health care systems could exert themselves fully, reducing the rate of death, and keeping those numbers a small fraction of what’s been seen in the United States.

A second tier of leaders took less drastic measures, but still maintained a rate of infection that was around 1/7 that of the United States. That includes countries that border the U.S., like Canada and Mexico, along with many European nations. These countries didn’t extend the dedicated efforts that made New Zealand or South Korea global stars, but they still combined control of the coronavirus and treatment of COVID-19 patients to define what genuinely constitutes a “good job.” Had Donald Trump performed his role to the level of Angela Merkel, he would be cruising toward reelection on a raft of commendations and the nation would be easing back into normal life with a national testing system keeping a close watch for new outbreaks.

But of course, this table is somewhat selective. Of the 195 nations on the planet, the United Staes comes in at number 11 on the rate of deaths per million—though to get there takes including locations like tiny Andorra and San Marino, where just a handful of deaths turned into large numbers in overall percentages. Still, there are a few comparisons still worth making.

What’s amazing about this group is just how similar their results have been. All four results on rates of death are clustered together with results within 3% of them. Considering that the results in Sweden represent a deliberate disregard for many avenues of spreading COVID-19, the fact that Trump, Johnson, and Bolsonaro still manage to do worse sets these leaders in a elite group of incredibly piss-poor performance.

Of course, in Trump’s case, that performance was deliberate.

All numbers in this article came from the WorldOMeters COVID-19 scoreboard. While the numbers at this site are somewhat different than those at Johns Hopkins, the E.U. CDC, or COVID-19 tracking, they are consistent in their methodology between nations and do a good job of documenting both their own sources and decisions.