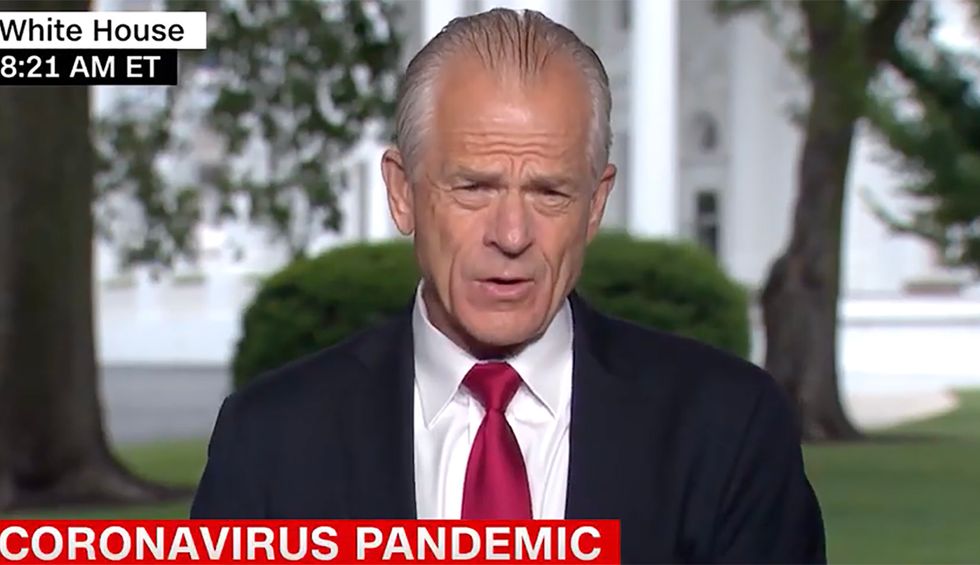 The sheer number of sources on this Washington Post report of abusive behavior by and the belligerent wrongness of Trump trade adviser Peter Navarro, who has for some reason inserted himself into a position of prime and unqualified decision-making on the administration's COVID-19 pandemic responses, sends a clear message: Team Trump is trying very hard to push Peter Navarro under the bus, but Navarro is such a nasty old cuss that nobody can quite get him to stay under there.

That Navarro's pandemic decisions have been questionable is not news. Navarro's focus on hydroxychloroquine sent the administration far down a useless path. His push for reforming Eastman Kodak into a drug producer quickly turned into a federal investigation on possible insider trading. His self-lauded contract purchasing ventilators at a near-500% markup from what they might normally go for was met with derision and, eventually, scaled down drastically. Those are all known instances of Navarro screwups.

What we didn't know, but should have guessed, is that Navarro is a living bloody terror to work with, something akin to putting mittens on a rabid wolverine, giving him his own office, and Just Seeing How That Goes. Navarro was so consistently abusive towards women on his staff, reports the Post, that then-Chief of Staff John Kelly ordered the White House Counsel's office to launch an investigation. Navarro only kept his job because that investigation concluded Navarro was a raging asshole to absolutely everyone.

Indeed, the Post's sources seem to indicate that every last person in the building hates him, as do Republican lawmakers, as do Trump's other allies. "Navarro is often hostile and overbearing in arguments, prone to attack anyone who disagrees with him as a representative of the 'deep state,'" reports the Post. And Navarro's one notable instance of being right—warning that the emerging COVID-19 pandemic could become a severe threat in the United States—was apparently dismissed inside the White House precisely because Navarro was similarly frothy about other things, all the time.

So what we have here, then, is a White House that collectively has gotten so fed up with Navarro's toxic behavior that they're willing to go to the Post and give as much anonymous dirt as they can. Trump, though, won't fire him—yet. If the wider Team Trump is successful in tying Navarro to the consequences of his many pandemic failures, however, it is possible that he will be reassigned to a new position as human speed bump.

Really, though, we can't overemphasize how on board we are with this particular White House plan. Navarro has long been a notorious crank even in areas of his supposed expertise—the man's sole proven talent has been an ability to fling himself onto American television screens. He's been a paranoid, "deep state"-screaming-about jerk in every interaction because, like Trump, that's how he blusters his way through being provably incompetent at his actual job.

Of course everyone hates him! Everyone in the White House hates absolutely everyone else—that's why seemingly every story about the White House for nearly four years now has consisted of anonymous Trump someones telling tales about other someones! The whole place is a zoo with no keepers, broken locks on every gate, and the gorillas have gotten hold of Tasers.