The West faces apocalypse — and we need a national solution 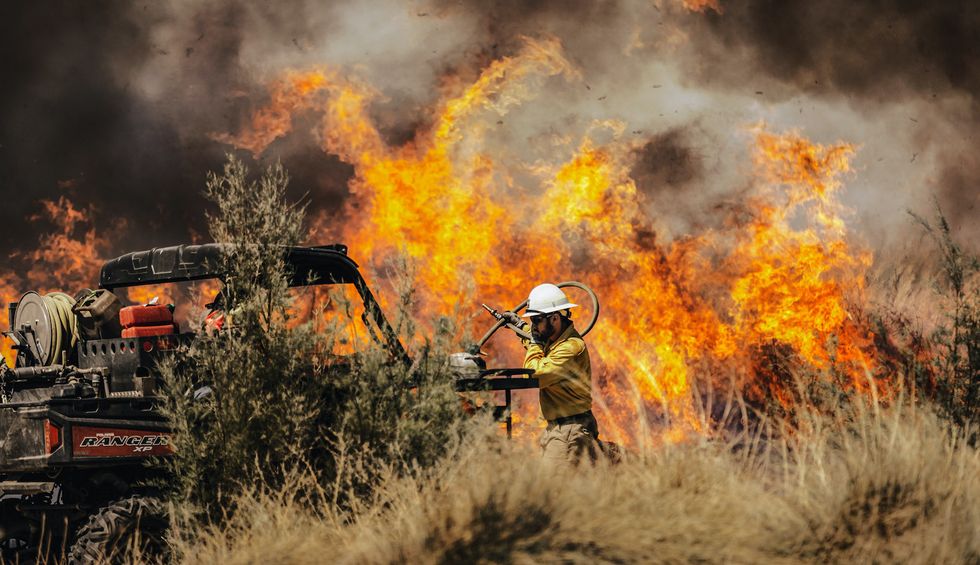 The clash between Donald Trump and Joe Biden over the roots of the West's apocalyptic fire season has missed the crucial point – perhaps because neither candidate is targeting the solidly Democratic Pacific Coast.

Biden justly called Trump a "climate arsonist," after four years of desperate efforts to accelerate climate change and convince the American people to ignore its threats. Trump is wrong to blame state forest management policies for the fires. But a major source of the conflagration was a misguided national century of treating fire, not fuel, as the enemy in the arid West, so arguably the president is stumbling around an important reality.

But while climate change is igniting the great burn, and fire suppression is fueling it, communities faced with flames need investments that protect and counteract short-term threats, even while long-term climate and fuels management solutions can be implemented.

Neither candidate has offered such a package of meaningful short term solutions — but they exist. Nor has either offered equivalent investments to protect flood-prone communities in the heartland, or hurricane-threatened coastal residents. All three, which taken together loom over 25% of the U.S. population, desperately need federal leadership.

Smoke and fire have driven me from a family retreat north of San Francisco four times in the last three years. I've experienced the searing expansion of the fire season. Overstocked, understory-clogged woodlands stretch as far as my eyes can see. We must face these problems. But by the time we do, even if we are diligent, the cost in communities burned, economies shattered and lives lost is simply too high.

While confronting the root causes, we must also minimize the price that blameless communities pay for all our past errors. That means making community protection the centerpiece of our fire response in the arid West, just as we make it the centerpiece of our flood control policies in the heartland and our hurricane preparation along the coasts.

In 1933 Franklin D. Roosevelt inherited the Dust Bowl, which was itself a complex, multi-causal ecological disaster. He inaugurated a series of investments, focused on the Soil Conservation Service, that in five years cut wind erosion by 50%.  It began not with policies, but with capacities.

This year's fires were not ignited by utility poles — mostly lightning was the igniter, as it has been for millennia. No easy fix there. Nor were the biggest fires in California turbocharged by high winds. So the problem was not transmission, meaning the way the fires spread. And unlike some of the fires in Oregon, California's were not even fire tornadoes exploding in previously moist and densely grown canyons. Some raced across land that had burned only three years ago.

So why did they spread so far and so fast?

There simply weren't enough Pulaskis on the ground. (If you've never heard that term, it's a firefighting hand tool that combines an ax and an adze, whose invention is credited to legendary Forest Service ranger Ed Pulaski.) There never are. Adequate resources, professionally deployed, are the key to community protection.

We simply don't take rural fire management seriously, fund it adequately or staff it professionally. The full-time staff of the U.S. Forest Service, or state agencies like California's Department of Forestry and Fire Protection, universally known as Cal Fire, are superb. But the full-time firefighting cadre in the Forest Service, with 191 million acres to protect is fewer than 5,000 strong, with only 5,000 more part-timers available. By contrast, New York City's fire department has almost 11,000 full time firefighters for 200,000 acres.

Cal Fire also has fewer than 5,000 full-time firefighters. It supplements them with 5,000 seasonal staff and a normally roughly equal number of prison inmates — but this year only half the number of inmates were available, thanks to the pandemic. Oregon needed twice as many firefighters as it had available, and scrambled to find National Guard troops to fill the gap.

Time and time again, reports have  indicated that for many of this year's fires, efforts to contain their early spread were not even attempted. Firefighters were only able to stop imminent threats to lives and communities, and not always those if the communities were small or remote.New fires in remote areas simply had to wait.

There is a surprisingly simple, uncontroversial and — I, at least, will argue — clearly affordable solution.

Take rural fire management seriously. Treat it like the Netherlands treats flood control: as a vital public service. Fund it appropriately, staff it professionally, and focus on preventing fires from reaching communities, not fighting them after they do. This is the heart of the concept of Community Protection. Imagine that the rural West, instead of relying upon a ramshackle, pulled-together seasonal fire force — sometimes reliant on prisons or National Guard units — could call upon a nationally integrated Fire Service Corps. It might perhaps mobilize 100,000 full-time fire professionals, federal, state and local. Most of the year these professionals, like Roosevelt's Soil Conservation Service, would help rural communities properly manage fuel loads, ensure building safety and other facets of community fire risk (just as fire departments in cities do).

When fire season comes — perhaps early, as it did this year — the first lightning storm to ignite multiple fires would not have sent Washington, Oregon and California scrambling to find needed firefighters. The Fire Service Corps would simply shift from work they might have been doing cutting brush on the outskirts of Berryessa Estates, California, to suppressing the Hennessey Fire and its companions in their first hours, so that the flames never got close to homes. And because the Service Corps would have deployed extensive controlled burning in key corridors, the fire would have largely followed predictable pathways where the corps, perhaps supplemented with seasonal and convict trainees, could have been ready to erect fire lines.

Can we afford this? Since federal, state and local governments — along with insurance companies — already pay for our fire management failures, they can in fact profit from investment in fire management success. Cal Fire's budget is $2.3 billion. The 2017-2018 fire seasons cost the state $40 billion. Imagine that the California portion of the budget for an integrated federal-state-local Fire Service Corps is $10 billion, and that with this enhanced investment we could cut the state's long-term fire damage bill in half, from $20 billion to $10 billion. Every year we would save $2.3 billion on total fire management costs — and all of the uncounted costs of wildfire from lost human lives, damaged health and lost business activity would be additional benefits.

How best to deploy the enhanced capacity of a Fire Service Corps would be a local decision, and would require extensive trial and error, just as the Soil Conservation Service did not begin with a detailed blueprint to stop the Dust Bowl. But I would argue that any serious effort to put community protection at the heart of a new American response to fire — or to floods and storms — must begin by creating an institution with the mission, the capacity and the professionalism to do whatever the crisis requires. And then give it the federal funding to prevent community fire damage — likely a lot less than we will otherwise spend repairing it.