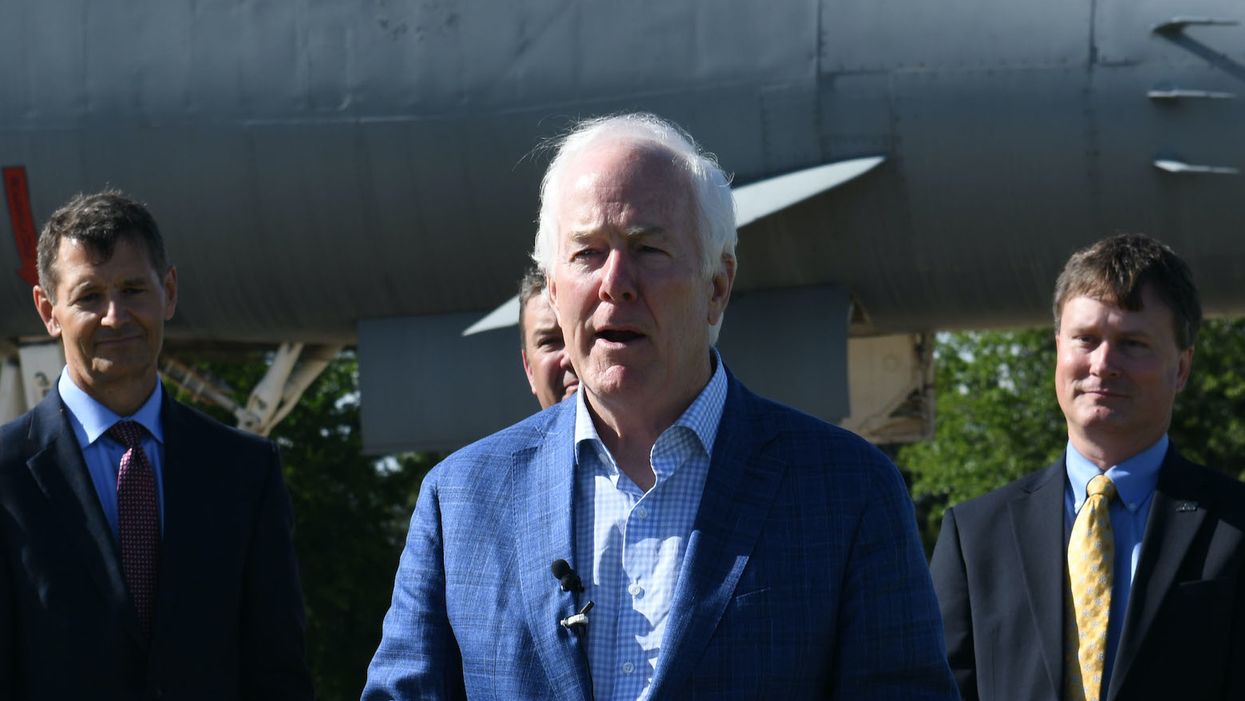 U.S. Sen. John Cornyn holds a press conference for local media in front of a B-1B Lancer static display on Dyess Air Force Base, Texas, April 19, 2019. Sen. Cornyn spoke to media about the B-21 Raider slated to come to Dyess AFB by the mid-2020s and its impact on the local community.

Republican Sen. John Cornyn of Texas is what happens when you have a worn-out bigot who has never had a single good idea in his life continue to be a U.S. senator. Cornyn may not be as overtly off-putting as Sen. Ted Cruz, but his ideas and actions are equally horrific. One of the Texas senator's most recent claims to fame was an entirely noncommittal answer concerning what he would do if Donald Trump decided he was going to enact a coup d'etat and abolish our country's Constitution in order to begin a dictatorship. That's what Cornyn brings to the U.S. Senate. As a result, Cornyn finds himself in a close Senate race against veteran MJ Hegar, and so far his big "policy" attacks on her have seemed to be based on the fact that she … has tattoos?

On Friday, The Texas Tribune reported that one of the many "high stakes" issues presented by the passing of Supreme Court Justice Ruth Bader Ginsburg was that if a Texas Republican-led lawsuit against the Affordable Care Act were to succeed at the highest court's level, at least 1 million Texans would lose their subsidized health care. The problem would be doubly compounded by the fact that after decades of sitting on their hands, Republicans in Texas and abroad have yet to come up with anything that might possibly replace it. Cornyn decided to chime in with his deepest thought of the day, tweeting: "This is pure scare tactics. Why?" Is the story a scare tactic? Does he not understand why 1 million people would lose their insurance? It's hard to say, but Cornyn isn't a man for thinking, or doing good things for people. But Twitter saw these 33 characters of idiocracy and responded with one of the largest ratios we've seen in quite some time.

Firstly, a reporter attempted to get the scoop since Cornyn clearly has some amazing insurance policy he's been sitting on for (checks notes) 18 years.

@JohnCornyn If Republicans have a replacement plan ready to go if the Supreme Court strikes down the ACA, I'm all ears.
— Steven Dennis (@Steven Dennis)1601343505.0

Then someone attempted to figure out if they could answer his question.

And the harsh Republican reality.

@JohnCornyn 12 years no plan while our water system deteriorates, or food is full of toxins, the climate is crumbli… https://t.co/I9fCsIyehB
— Erin Brockovich (@Erin Brockovich)1601344820.0

A reminder of who to vote for if you vote in Texas.

@JohnCornyn Wait - are you asking the Texas Tribune to explain why it is reporting that the GOP hasn't come up with… https://t.co/ARGBdYbFZs
— Democratic Tweeter (@Democratic Tweeter)1601340427.0

Also, someone made sure to educate Cornyn on what is and what is not a "scare tactic."