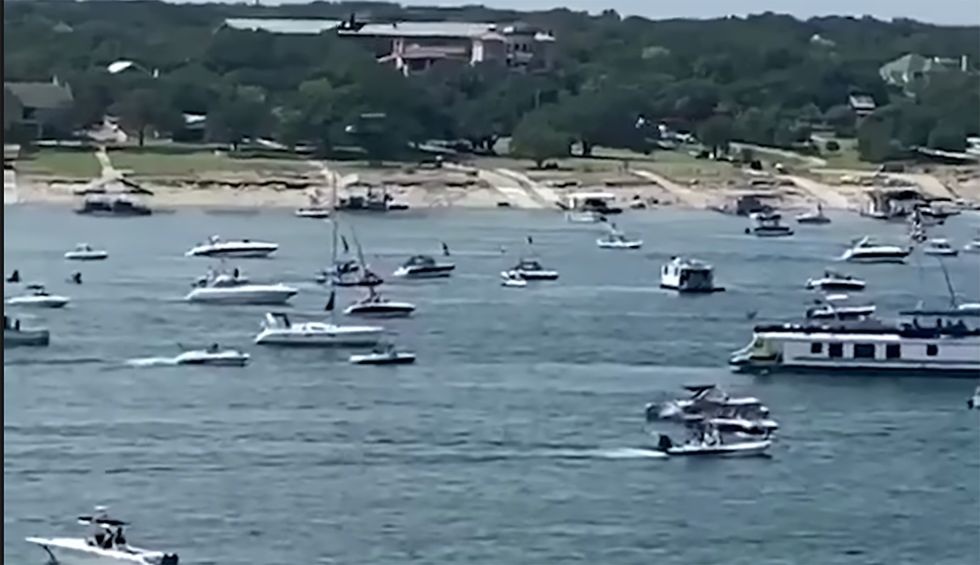 If you missed this weekend's big boating news, pro-Trump freshwater boaters staged a mighty boat parade in the confines of Lake Travis, just north of Austin, Texas. But you probably didn't miss that news, because the pro-Trump parade became a spectacle when wakes of several hundred small boats all traveling the same direction on a confined body of water created waves combined to sink at least four of the pro-Trump vessels.

Yep. That's right. When boating in groups, you see, it is important to follow certain rules. Speeds must be kept low, so as to not generate wakes dangerous to nearby, smaller boats. It's important to properly distance from others. And if you don't follow those basic rules of safety and decency, it's not necessarily you that's going to be in danger. Huh, this is feeling like a metaphor for something.

According to The New York Times, event organizers were not terribly broken up about the sinkings, with one writing it off as an "accidents are bound to happen" sort of thing.

“You can have really great water one second, and it could get some pretty heavy swells in a matter of minutes. Once boats get on a lake, mother nature has its own plans.”

Yup. If many many boats all plop down next to each other, start driving in the same direction, and nobody pays much mind to what might happen, it's strange how mother nature can just coincidentally start making rough, boat-swamping swells for absolutely no reason at precisely the same time. Crazy stuff.

Anyhoo, aside from multiple people losing their boats—and really, what better sign of devotion to Dear Leader could be mustered than sacrificing your recreational watercraft to his greatness—nobody was injured. Government-paid emergency responders were able to rescue all in distress, and all's well that ends well. Unless you count massive doses of humiliation on Twitter, much of it compiled under the hashtag #Dumbkirk.

At least four boats sank at an event promoted as a Trump Boat Parade on Lake Travis in Texas on Saturday, the autho… https://t.co/0UNDKU7pdJ
— The New York Times (@The New York Times) 1599337805.0

Coast Guard: Do you need assistance? boaters: NO WE’RE NOT DROWNING THE LIBS ARE DROWNING YOU CUCK https://t.co/zFCNA15wCF
— CoronaInItalyHat (@CoronaInItalyHat) 1599337010.0

@AnEggOnABeach This #TrumpBoatParade has become a metaphor for the Trump presidency. All flags and and right wing… https://t.co/9xrpvpAwvQ
— Vetinari3 (@Vetinari3) 1599391934.0