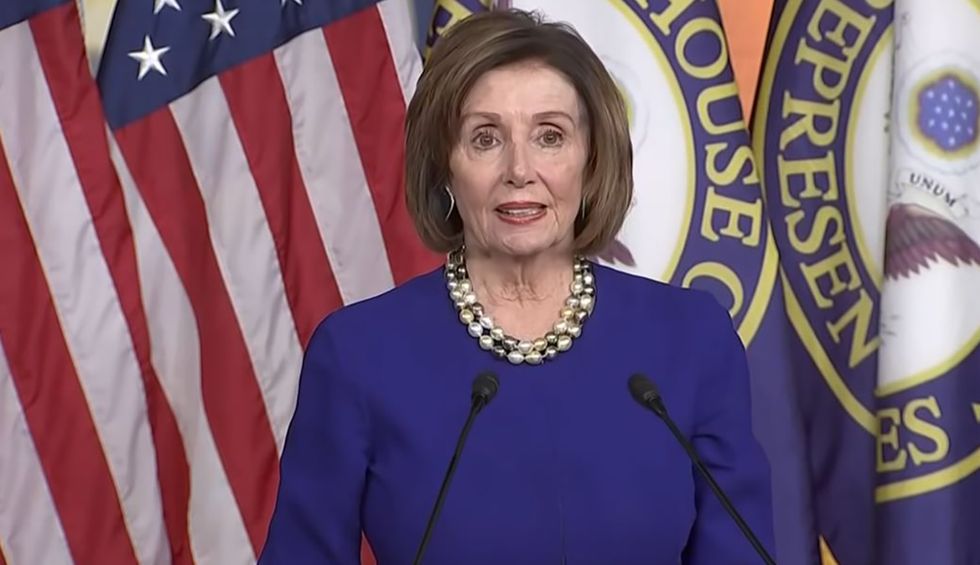 Appearing on ABC’s This Week on Sunday morning, House Speaker Nancy Pelosi honored the late Justice Ruth Bader Ginsburg by aptly describing her as a “brilliant brain” on the Supreme Court, reminded people that it’s absolutely imperative to get out and vote this November, and the ongoing importance of battling the novel coronavirus pandemic. On the subject of the vacant Supreme Court seat, the Democrat from California didn’t rule out launching an impeachment inquiry of Donald Trump (for the second time) or Attorney General Bill Barr, which would delay the Senate’s ability to confirm a Supreme Court nominee of Trump’s, either.

When host George Stephanopoulos hypothesized a major concern of progressives—that even if former vice president Joe Biden wins the election, Republicans and the White House might try to push through a nominee anyway in a lame-duck session—Pelosi replied: "We have our options.” The speaker continued, “We have arrows in our quiver that I'm not about to discuss right now but the fact is we have a big challenge in our country. This president has threatened to not even accept the results of the election.”

She stressed that the “main goal” is ultimately to “protect the integrity of the election as we protect the people from the coronavirus." The speaker noted that she believed the late Ginsburg would want that same goal. Pelosi also clarified that “None of us has any interest in shutting down the government,” saying it would be too harmful to so many people in the nation.

“When people say, what can I do? You can vote,” the speaker stressed. “You can get out the vote, and you can do so as soon as possible.” She added that the same day we lost Ginsburg, ten states started early voting.

Stephanopoulos circled back to a potential impeachment inquiry and asked if the House would “rule anything out.” Pelosi drove home the basic tenant of public service: responsibility to the people.

"We have a responsibility,” she stated. “We take an oath to protect and defend the constitution of the United States." (If only Trump saw it that way.) Pelosi continued: “We have a responsibility to meet the needs of the American people. When we weigh the equities of protecting our democracy, requires us to use every arrow in our quiver.”

Lastly, Stephanopoulos asked about another big topic among progressives: expanding the court. To that, Pelosi said, “Well, let's just win the election,” adding that she hopes the president will “see the light.” The speaker then used her final talking time to home in on the importance of the Affordable Care Act, and how much the average American has at stake in this election cycle.