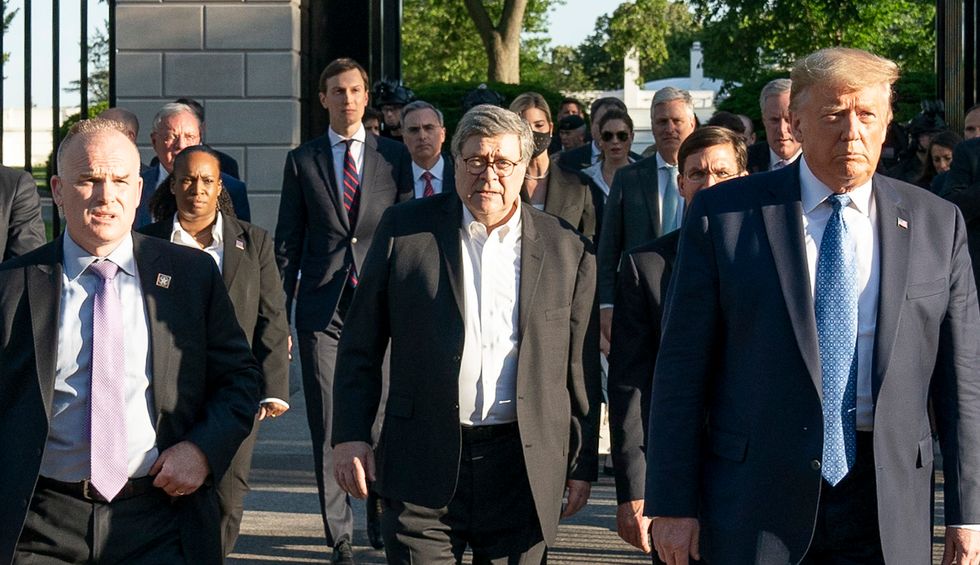 National Guard Major Adam DeMarco has come forward and provided sworn testimony that everything about the narrative that Attorney General William Barr has been saying about the assault on peaceful protesters that took place on June 1, 2020, outside the White House is an absolute lie. The decision to make a violent assault on protesters was not the result of anything that took place on the streets—it was a decision made well in advance. Not only did the mixed group of forces that assaulted Lafayette Square deploy chemical and “less lethal” weapons, they had with them 7,000 rounds of ammunition. Planning for the event had them even asking for two other weapons: One that that would have attacked the crowd with sound, and the other that would have literally cooked them with a beam of microwaves.

The testimony, obtained by The Washington Post, makes it clear that Barr’s claims that protesters had become “violent” was not just a lie, but a lie made up in advance to excuse an operation that had been planned well in advance. DeMarco served as liaison between the National Guard and U.S. Park Police, and was aware of both their planning and actions on that day. That a string of emails seeking to obtain an Active Denial System that would blast protesters with a beam of radiation designed to make them feel like their skin was on fire.

By any measure, the clearing of Lafayette Square at the directions of Donald Trump and William Barr on June 1, 2020, was among the most blatant abuses of power conducted by a White House that believe abusing Americans is its right. In the midst of protests following the police murder of George Floyd, Donald Trump appeared in the White House Rose Garden to proclaim himself “the friend of peaceful protesters.” Meanwhile, Barr directed a mixed group of National Guard, Park Service police, and Secret Service who advanced into chanting protesters carrying riot gear, firing tear gas, deploying rubber-coated steel bullets, and throwing chemical grenades. Among those beaten or gassed were not just protesters but reporters, medical personnel, and clergy.

Minutes later, Trump strolled into the cleared square along with Barr and Chairman of the Joint Chiefs of Staff General Mark Milley who was wearing his uniform. With National Guard and a Park Police SWAT team flanking him, Trump strolled to St. John's Episcopal Church, where he posed for a photo op with and without his entourage while holding a Bible stiffly—and upside down—above his head. Among those driven away by genuine violence and tear gas were the rector of that church and two dozen priests and lay volunteers who minutes before had been there providing food and medical aid for the protesters.

The violent, deliberate, and open breech of the First Amendment could not have been more obvious. Since the event, Barr has been the chief spinner of a false narrative in which he has claimed that the move into the square was instigated by violence from the protesters, that tear gas was not used, and the actions taken to clear the area were unplanned. All of this is a lie so obvious that it’s astounding even Fox News allows it to be mouthed unchallenged.

Not only did the Trump team carry out this assault on peaceful protesters as a publicity stunt, they did so with a great deal of advance planning. That planning was evident on the ground as a caravan of armed National Guard forces arrived an hour before the assault. Barr was also on hand an hour before the attack began, standing at the edge of the crowd, looking out into the protesters. Park Service police put on gas masks well in advance—a strange step for a action that was not planning to deploy tear gas.

It’s also overwhelmingly clear that the confrontation itself was absolutely deliberate. A curfew had been announced for 7 PM, and organizers both at the church and elsewhere had begun to pack up with plans to depart, before assaults well in advance of that deadline by Secret Service forces led to confusion and pushed protesters together. The attack was timed to take place before the curfew deadline—after all, how “tough” could Donald Trump look if there was no one around to gas and shoot?

In the emails shared by DeMarco, military police sought to get their hands on the heat ray because it “can provide our troops a capacity they currently do not have, the ability to reach out and engage potential adversaries at distances well beyond small arms range, and in a safe, effective, and nonlethal manner.” What’s clear here is not just where the forces involved were willing to parboil protesters at a distance, they regarded them as “adversaries.”

Proponents of the ADS have advertised the system as nonlethal, and demonstrations have shown that it produces a feeling of being blasted by extreme heat while leaving no long-term damage when used as specified. However, there’s a reason the system has not actually been used by the military in the field. Not only has it been considered unreliable in real world situations, it’s clear that anyone receiving too much of the radiation can be subject to severe burns, or worse. Though the wavelength of radiation used is designed not to sink too far below the skin, prolonged exposure can lead to blistering, to skin damage that leaves behind scars, to a possible risk of cancer, and even potentially to death.

Used in tests in which volunteers received measured blasts, the ADS produced a sensation of extreme heat and pain that sent people running without leaving long-term damage. But the real world is not a field test. What happens to people who fall, or are trampled, or are simply confused by the invisible source of the fire that is burning all along their skin and ends up receiving a much larger exposure? What happens when the person shining this pain ray on the crowd decides that if a little is good, more would be better? After all, this was already a group that decided blasting unarmed, peaceful protesters with gas, explosives, and projectiles was perfectly okay.

One other system the forces involved talked about getting was an LRAD system—essentially a very loud speaker that could blast the crowd with announcements. These systems have been deployed at several events going back to 2004, and have been used by police departments delivering warnings for crowds to disperse. But the assembled forces of Donald Trump and William Barr didn’t get an LRAD. Instead, they delivered their supposed announcement to clear the area from a single officer carrying a megaphone, at a volume so low that even those standing at the front of the crowd couldn’t hear it, and reporters on the scene couldn’t make out what was being said.

That part appears to be no accident, since it was clear Trump and Barr weren’t just looking for a fight, they felt like beating up unarmed civilians was essential to the photo op.