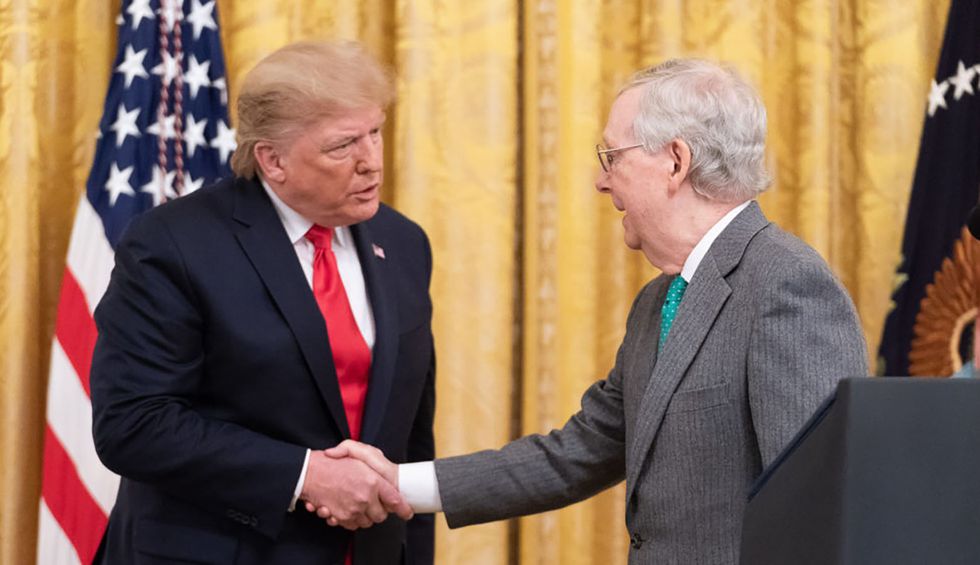 Conventional wisdom for the past several decades in Washington has decreed that the Supreme Court is a more animating issue for conservative activists and therefore also more electorally potent for Republicans.

You can throw that all out the window because whatever merits the argument may have had a decade ago certainly don't apply now—not even close. In fact, let's take a look at several different factors at play in the upcoming battle over filling the seat left by “notorious” Supreme Court Justice Ruth Bader Ginsburg and how they’re likely to effect the election.

First of all, remember that people are already voting. In fact, Tuesday is National Voter Registration Day (goto: iwillvote.com), and Democratic voters, who have been building a sizable lead in early voting, can register their disgust over Senate Republicans' rank hypocrisy in real time.

But in terms of whether the Supreme Court is motivating Democratic voters, where public opinion stands on the impending confirmation battle, and the key issues of this election cycle, nothing suggests that trying to confirm a new justice is anywhere near an automatic boon to Republicans. In fact, quite the opposite.

Democratic donations soar — As of Sunday, the Democratic fundraising site ActBlue had already cracked $100 million in donations in the two days since news of Ginsburg's passing broke on Friday night. Even more promising, all those millions were fueled by more than 1.5 million small-dollar donors. ActBlue called the crush of donations record breaking. On Saturday alone, Democratic donors gave $70.6 million through the site compared to a previous one-day record of of $41.6 million.

According to the New York Times, tens of millions have flooded Democratic campaigns since Ginsburg’s passing, potentially reshaping the map for Senate Democrats. That includes nearly $3 million in Alaska, $6 million in North Carolina, and sums in Arizona, Maine, South Carolina, and Kentucky that could be “even bigger.”

People always think the Supreme Court galvanizes evangelical voters. That voting bloc is largely baked in for Republicans—they turn out in high numbers every election and haven't appreciably moved away from Trump or the GOP since 2016. The X factor here isn't evangelical voters, it's the enthusiasm from grassroots donors on the Democratic side—which is through the frickin’ roof.

Polling —The polling related to this Supreme Court fight is overwhelmingly good for Democrats and comes from several different directions. On the question of whether Trump or the next president should fill the seat, a Reuters/Ipsos poll taken in the two days following Ginsburg's passing found that 62% of Americans—including about half of Republicans polled—think the winner of the upcoming election should name the next Supreme Court justice.

And in terms of enthusiasm, a national Marquette Law School survey taken prior to the news found that, by a solid 8 points, Biden voters rated the Supreme Court as a "very important" issue over Trump voters, 59% - 51%. More Democratic voters than Republican voters also viewed the next Scotus pick as "very important,” 56% - 48%.

Messaging — House Democrats famously picked up a record 41 seats in the 2018 midterms by focusing like a laser beam on health care to the exclusion of almost all other issues, including Trump's unbridled corruption and Republicans' failure to rein him in.

The Supreme Court opening gives both the Biden campaign and congressional Democrats the opportunity to refocus voters on the Trump administration's overt effort to rob 10 of millions of Americans of affordable health coverage and more than 100 million Americans of protections for pre-existing conditions. Until now, the GOP's latest legal effort to kill the Affordable Care Act (ACA) had mostly flown under the radar of the presidential election even though oral arguments in the case will be heard on November 10, only a week after the election.

Whether Republicans are able to seat someone on the court by then remains to be seen. But the fact that Republicans are once again closing in on striking down the law without even an inkling of a replacement, and that they are also dangerously close to securing a sixth conservative justice on the bench is a perfect way for Democrats to make the court's importance critically real for many people.

In fact, Trump's vulnerability on pre-existing conditions coverage was on full display last week during the presidential town hall in which he lied about his administration's effort to overturn the ACA and, after he was called out for lying, offered, "Doesn't matter. I have it already ... and it's a much better plan."

Riiiiiight—that repeal "plan" Trump couldn't even shepherd through Congress in 2017 when Republicans had unified control of government. In fact, Republicans never even got around to offering any sort of replacement bill since they were too incompetent to repeal the ACA in the first place.

Trump's continual empty promises on health care are never going to satisfy any voter who now has pre-existing conditions coverage due to the ACA. His stumbles on the issue during the town hall also guarantee that Trump will face more queries on the topic, particularly given the upcoming Supreme Court case.

The open Supreme Court seat has now given the Biden campaign another opportunity to train voters' attention on Trump's obsession with destroying the ACA without any idea whatsoever how to replace it.

After all, health care was the defining issue of 2018 and polls show it continues to rank as a top issue for voters, particularly in the midst of the pandemic. If the Biden campaign is able to inextricably link Trump seating another Supreme Court justice with the collapse of health care coverage nationwide, it will enhance the chances of every Democratic candidate across the country, including for U.S. Senate.