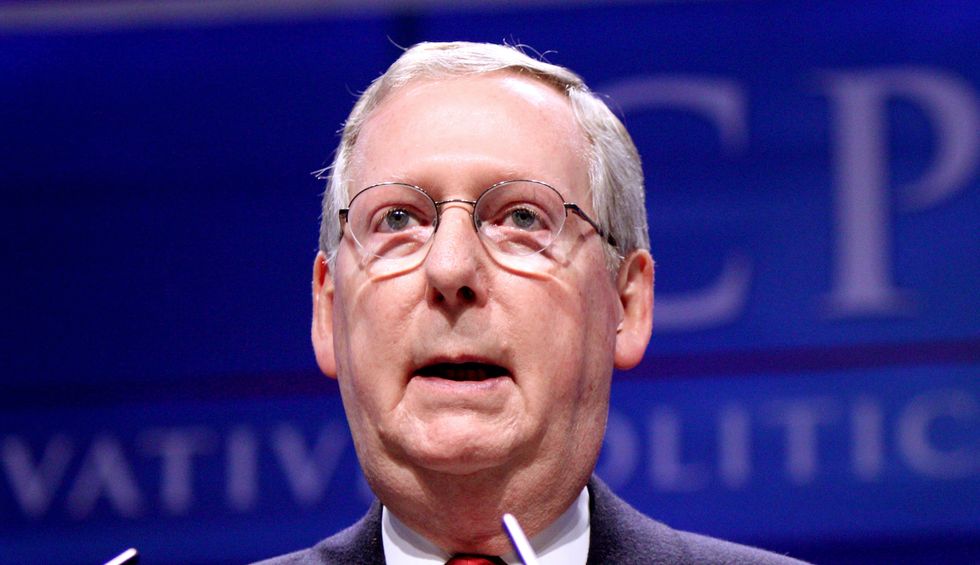 It's been 111 days since the House passed the $3 trillion HEROES Act, which Sen. Mitch McConnell has refused to take up, and it's 27 days until the government runs out of funding at the end of the fiscal year. New unemployment figures for last week are out: 833,000 people filed for state unemployment benefits under the new seasonally adjusted guidelines. But the real number, including those filing under Pandemic Unemployment Assistance (PUA) is 1.6 million. Just last week. The week before was 1.4 million.

There are more than 29 million people receiving unemployment insurance in the U.S. right now who have lost the lifeline of the $600/week bump in payments. There are many more who are unemployed and not receiving universal income (UI). Many of them—as many as 23 million—are facing eviction. Feeding America projects an additional 17 million of them will become food insecure this year, for a total of 54 million Americans who don't have enough food. And Senate Majority Leader Mitch McConnell said Wednesday that he doesn't know if another stimulus bill will be agreed to this month, "but we're giving it our best."

He is not giving it his best. His best would be having passed the HEROES Act back in May, or at least having negotiated with the House before summer for a bill that would pass. His best would be a willingness to negotiate now with Democrats. Instead, he's wasted weeks negotiating with other Republicans. He would be offering something other than his "skinny" (he prefers to call it "targeted") bill that slashes the UI boost in half to $300/week, just through December (the coronavirus is not ending in December), more loan funding for small businesses, $105 billion for education, and liability protections for schools and businesses to let them off the hook for negligence that ends in coronavirus infections. There are indications that McConnell is feeling some pressure, though, in that his bill would convert what is now funding as a Treasury loan to the U.S. Postal Service into a grant.

McConnell has been working to get 51 votes for this among Republicans, and there's a suggestion from Republican aides that he's going to once again threaten a government shutdown if it's not passed as part of a continuing resolution funding government past Sept. 30. Because of course he is—that's exactly what you'd expect of McConnell.

He can't do it with 51 votes, or even the 53 he has in his conference. He needs Democrats. Democratic leader Chuck Schumer sent a letter to his conference Thursday reminding them of that and reinforcing that this piecemeal approach by McConnell, in which he's trying to force Democrats to swallow a completely inadequate bill—he calls it "emaciated"—should get no Democratic support. "Based on their self-described lack of urgency, the continued division of their caucus, and this most recent inadequate proposal," he wrote, "it is clear Republicans are trying to 'check the box' and give the appearance of action rather than actually meet the truly profound needs of the American people."

Don't be pressured, he tells his conference. "It was our unity against a partisan, Republican first draft that allowed for significant improvements to be made; improvements that have benefited millions upon millions of Americans and helped our economy," Schumer wrote. "We should strive for, and hope we can achieve, another comprehensive, bipartisan bill that meets the moment facing our nation."

Democrats need to stand firm against McConnell to help House Speaker Pelosi and Schumer shut him out of the negotiations with Treasury Secretary Steven Mnuchin again. That's the only way anything has gotten done thus far in the crisis. There's been a tiny crack opened up in that Mnuchin and Pelosi having at least resumed talking. Now is not the time to cave and let McConnell get away with his usual tricks.