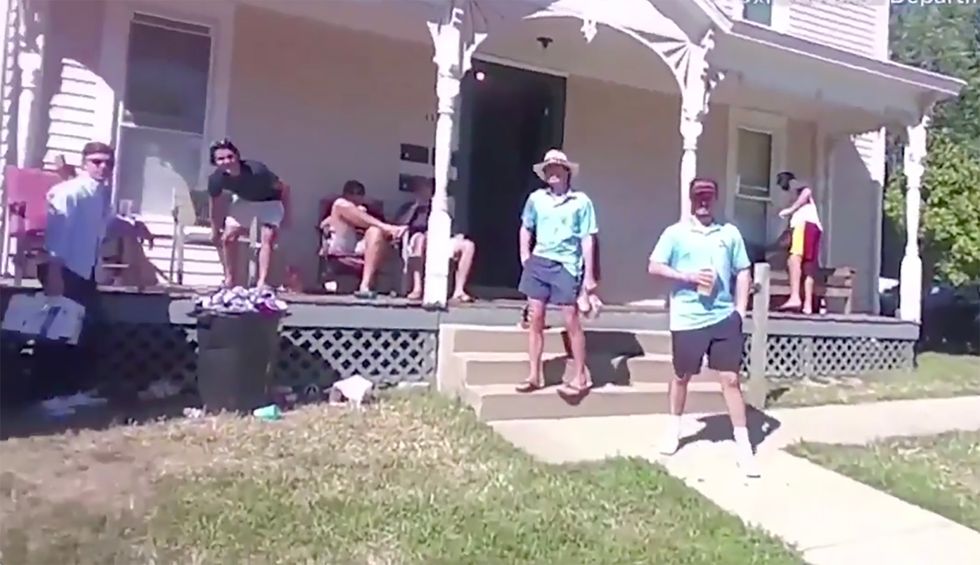 As colleges across the country open only to close amid the novel coronavirus pandemic due to outbreaks on campus, schools nationwide are blaming students for being irresponsible. The actions of some students who are not taking the virus seriously have affected students across the country. At the Miami University in Ohio, more than 1,000 students have tested positive for COVID-19 since August; despite this, a group of students was caught partying over Labor Day weekend on Sept. 5. A majority of those partying, including the hosts, had tested positive for coronavirus and were violating quarantine rules, CBS News reported.

Officers came to know this after running a student’s ID and noting the student had tested positive for COVID-19 one week earlier. “But you have other people here, and you’re positive for COVID? You see the problem?” the officer said. When asked how many others had COVID-19, the student replied, “they all do,” according to bodycam footage. Police fined six men, five who lived in the house and one visitor, $500 each, a civil penalty with no criminal charges. According to the student in conversation with the officer, everyone at the party “has COVID, as do the students who live across the street.” The student apparently did not understand that partying with people who also had COVID was against quarantine efforts.

"This particular case is egregious, but I think for the most part, by in large, the students have been very well behaved," Lt. Lara Fening from the Oxford Police Department told CBS News affiliate WKRC. "Some residents came over from across the street that were reportedly COVID-positive as well," Fening said. "We do not know if anybody else at that party was aware of the COVID-positive residents because some of them left while the officer was there." Fening suggested that anyone who attended the party should get tested.

Police from the Oxford Police Department arrived at the scene to break up the party that was violating city capacity rules limiting gatherings to no more than 10 people. Several students were reportedly sitting on the porch of the house, unmasked, and drinking. Bodycam footage shows the officer explaining the violation of having 20 people in their home to the students before running an ID.

While the school said it could not comment on the case due to federal privacy laws, it told news outlets that any student in violation of quarantine orders, including hosting large parties, would face disciplinary action under the Code of Student Conduct. "We take these matters most seriously, and students can face suspension or dismissal for these types of violations," a spokesperson for the university told CBS News on Friday.

Despite the number of cases increasing on and off-campus nationwide, the school announced its plans to resume in-person classes beginning Sept. 21 on Tuesday. According to the announcement, in addition to masks being required for all school activities, all students returning to campus must be tested for COVID-19 before moving into dorms. "This decision was made after many lengthy discussions and consultation with public health experts," Miami University President Gregory Crawford said in the announcement. "The health and safety of our students, faculty, and staff, as well as the Oxford community, is our top priority."

According to WCPO, over Labor Day weekend alone the university reported 159 new student cases of COVID-19. Campus parties continue across the country despite reports of coronavirus outbreaks  in more than 30 states across the country. Despite allegedly having a plan for the pandemic in place, large universities have seen an increase in cases since opening with many students partying on and off-campus, The New York Times reported. The University of Illinois at Urbana-Champaign is a prime example of this with students continuing to party despite a surge in cases. “If you know you are positive and you go to a party, that’s not just a bad act,” Ahmed E. Elbanna, a professor of civil and environmental engineering at the university, told the Times. “That’s very, very dangerous.”

While most schools have shifted online or taken to a hybrid model amid the pandemic, some are persistent to continue in-person classes. Since March, colleges nationwide have reported more than 26,000 confirmed cases of COVID-19 in at least 750 schools, The New York Times reported. Until both schools and students take responsibility and acknowledge the severity of this virus, an increase in cases on campuses is inevitable.