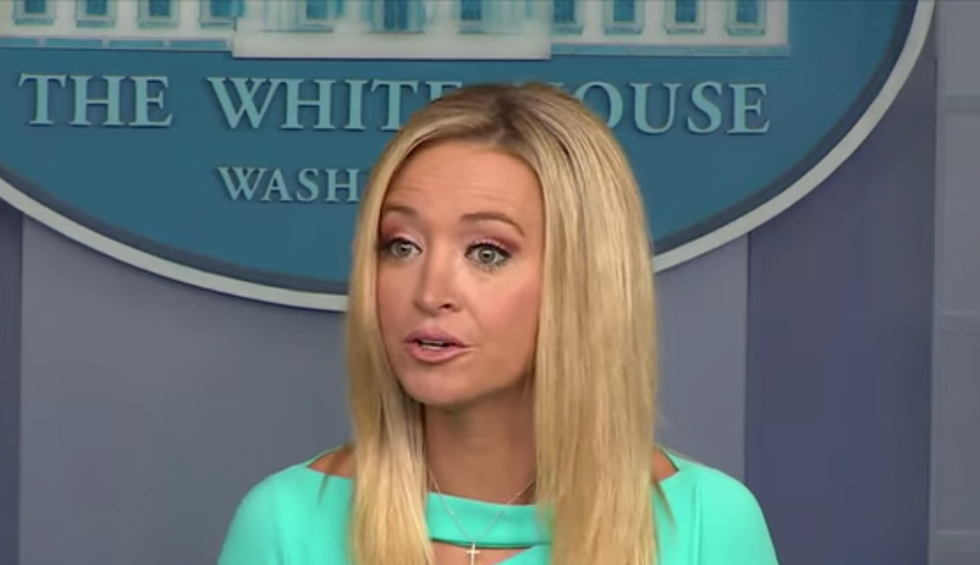 White House Press Secretary Kayleigh McEnany had an odd reaction on Wednesday when asked a basic question during a briefing with reporters.

CNN's Kaitlan Collins, following up on President Donald Trump's comments at a town hall the previous night, asked about the health care plan he claimed to have already. Trump has been promising a health care plan for the American people for more than four years now.

"On the health care plan, the chief of staff said that there's going to be one that is unveiled before the election, the one that the president has been promising for over a year now, long before that," she said. "But today on Capitol Hill, the top three medical experts in this administration said they have no idea of any kind of plan that is being formulated. So who is it that is working on the health care plan that is going to be introduced before the election?"

To be clear, this was not a gotcha question or something out of left field. The president was speaking about it the night before — indeed, has spoken about it for years — and all Collins wanted was the most basic facts about how the policy is being developed. This is extremely standard briefing fare, an extremely mundane question.

"So here at the White House, we have a wide array of people working on it," she said. "There have been elements of it that have already come out, like the telemedicine plan, the drug importation EO, the most-favored nations, were elements of what is an over-arching plan. There's more that will be forthcoming. And in aggregate, it's going to be a very comprehensive strategy, one where we're saving health care while Demorats are trying to take health care away. Where we're making health care better and cheaper, guaranteeing protections for people with pre-existing conditions, stopping surprise medical billing, increasing transparency, defending the right to keep your doctor and your plan, fighting lobbyists and special interests, and finding cures to diseases. Those are the principles that will animate —"

"But who's working on it, is my question," Collins said.

"Multiple stakeholders here at the White House who work on policy," McEnany said, a meaningless phrase. "Our domestic policy counsel and others are working on a health care plan."

Collins noted that none of the top officials who testified before Congress seemed to be involved in the plan.

"I'm not going to give you a readout of what our health care plan looks like and who's working on it," said McEnany. "If you want to know, come work here at the White House."

It was a baffling response. Collins's CNN job is, in part, to work at the White House and get information from McEnany about what the administration is working on. But McEnany's first laundry list of answers was actually completely irrelevant to the actual question, which was about Trump's plan for reforming health insurance coverage in the United States. He's publicly discussed the plan as if it's hidden in some drawer somewhere, not as a grab bag of health-related policies — some of which, such as protecting people with pre-existing conditions and ending surprise medical billing, were just lies on McEnany's part. McEnany also absurdly lied by saying Democrats want to take away people's health care.

The truth is, of course, that Trump doesn't have a health care plan. The Justice Department is currently working to have all of Obamacare struck down in court, which would throw millions of their plans and unravel protections for tens of millions more. Trump keeps saying he'll have a health care plan sometime in the future because he knows it's important to voters, but he's incapable of actually doing the work needed to formulate a plan that the GOP could accept.

And McEnany, for her part, clearly resents being called on by the media to account for Trump's obvious deception. She doesn't think Trump actually should have to provide a health care plan, it seems, and she is annoyed that anyone would question her on it. That's why her reaction to a basic question about the formulation of the plan was nonsensically hostile, showing open contempt for being asked to perform a basic part of her job.