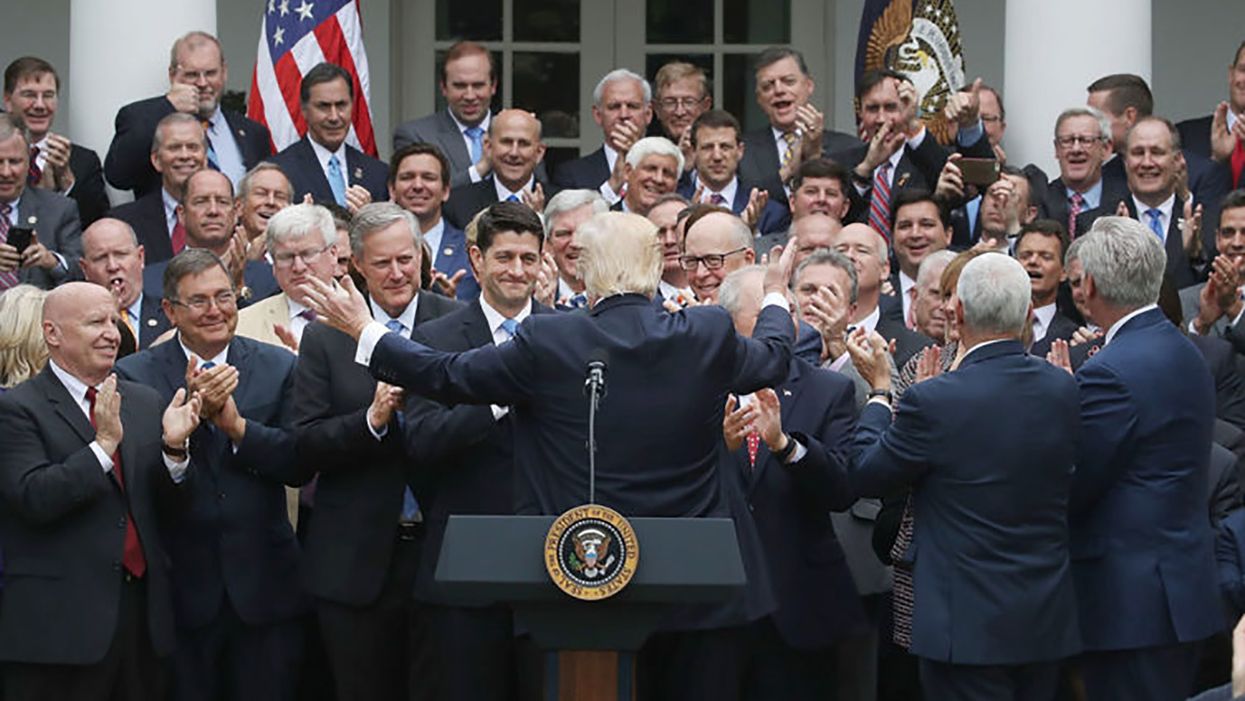 Ten House Republicans who fashion themselves policy wonks are out with their diagnosis of what ails the American worker. Their proposed cure is a future that would be brutish, nasty and short.

The Hobbesian, dog-eat-dog policies the Republican Study Group proposes would enhance the power of those born to privilege, just so long as nothing knocks them off their comfortable perch.

The 66-page report, Reclaiming the American Dream: Proposals to Empower the Workers of Today and Tomorrow, is amazingly slipshod. Frankly, the study group, lead by Rep. Mike Johnson (R-La.) and its staff should be ashamed that they published such low-quality work.

Many hypertext links in the End Notes don't work, including the first. Others point to web pages that generate a "404" page missing response. While some End Notes refer to official data, many point to ideological marketing organizations like the Heritage Foundation and polemics based on a priori assumptions.

Bizarrely, the report characterizes unions as holding down the compensation of members. That's absurd since the whole point of collective bargaining is to ensure that workers get fairly paid for their contribution to their employer's financial success.

Consider this lie on Page 32: "Under current law, union contracts set both a wage floor and a wage ceiling. As a result, individual workers cannot be given raises, including performance-based raises, by their employer."

No law is cited because none exists. And not one example of a contract that prohibits merit pay is cited in the report or in the right-wing newspaper article to which it links. I've negotiated a labor contract and I've read countless such collective bargaining agreements, none of which had prohibition of merit pay or bonuses. It's possible they exist, but the Study Group fails to show any evidence.

How revealing, though, that the Republican Study Group describes its imaginary prohibition on merit pay and bonuses as entirely a problem with unions rather than employers. The incentive to hold down pay lies with companies, not unions.

The report's attacks on labor unions as a detriment to members comes right out of the Donald Trump playbook in which making stuff up or distorting it without any respect for facts is the name of the game. Just make the claim and damn reality.

Throughout, the report makes recommendations that would require a larger federal government workforce to police workers, students, poor people and immigrants. Many more auditors and investigators would be needed to investigate anyone who relies on what remains of America's tattered social safety net.

Implementing the proposed changes also would require massive investments in technology, primarily computers to both operate federal programs and to find people who abuse these benefits.

Neglecting to propose these expansions of investigative staff and computer systems makes the study group report empty rhetoric that reveals its members' mindset, favoring much more top-down power and punishment.

The report attacks not working, something a wealthy nation could reasonably aspire to achieve. "Among the civilian labor force, less than half of those who fail to complete high school are participating in the labor force," the report states, accurately.

Heaven forbid that people not work. This is on a theme with Trump, who throughout his 2016 campaign complained that too many Americans were not working.

Of course, there are many reasons people don't work, especially the "poorly educated" whom Trump often says he loves.

Those reasons include staying home to raise children, which Republicans used to hail as a virtue. Then there's caring for elderly parents or a disabled spouse or just enjoying leisure instead of chasing every last buck.

Unmentioned in the report are government policies that have driven down wages for the "poorly educated," an issue examined in my 2014 anthology DIVIDED: The Perils of Our Growing Inequality. For the many people whom nature or education made fit only for unskilled work, wages are now so low that it doesn't pay to get a job and can actually make you worse off.

We would have more people working if we moved to the shorter workweeks and mandatory paid vacations found in, say, Germany. That's anathema to the Study Group's perspective.

Another bizarre claim is that forgiving the debt of students swindled by corrupt fake colleges "would actually drive up the cost of college tuition and send the message that students who make irresponsible borrowing decisions will ultimately be bailed out by the federal government."

What of the responsibility of Congress, under both Democratic and Republican majorities, and presidents from both parties who enabled fake colleges and who put in place the harsh student loan rules that are also examined in my 2014 anthology DIVIDED. My 2008 bestseller Free Lunch tells of a student loan company that bought a Gulfstream jet to ferry members of Congress around gratis, the kind of institutional bribery that can distort the priorities of lawmakers.

Nowhere does the Republican Study Group propose the most obvious answer to America's higher education affordability issues. To prepare our young for the increasingly complex world of the future, we could simply restore the mid-20th century policies of making public higher education tuition-free or nearly so, an investment of tax dollars to build a prosperous and durable future.

Not everything in the report is without merit. The federal government operates, the study group says, 90 social welfare programs. Consolidating and simplifying those programs is a worthy goal. The report, though, is antagonistic to such programs, making any reader reasonably suspicious of changes the Study Group would seek.

This misunderstanding of the American students' and workers' needs should come as no surprise considering the signatories of this report. Nine are male. All ten are white.