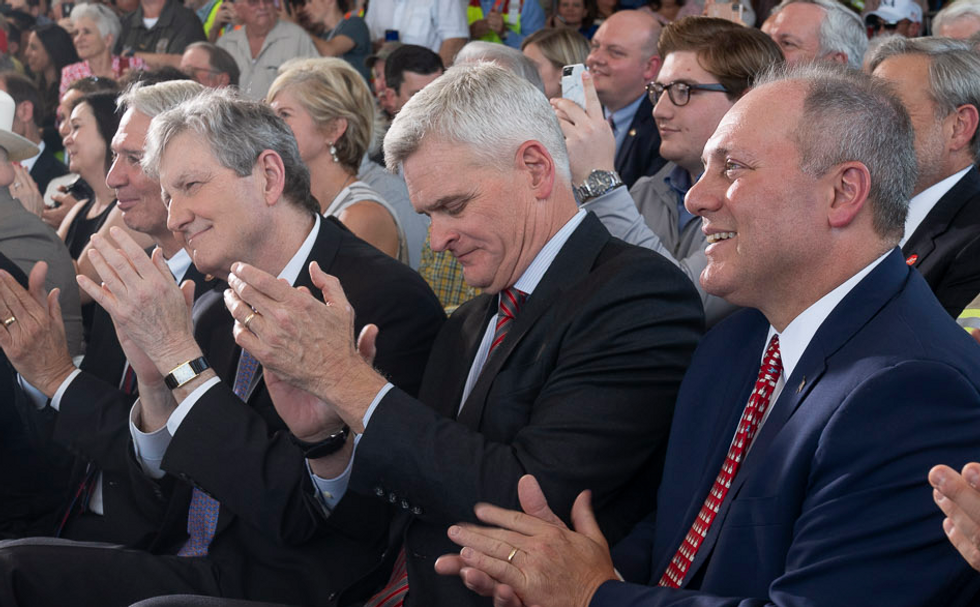 The Texas Tribune reported Friday that the NRCC had canceled $2 million in ad time for the Houston media market—apparently the committee's entire reservation—and would instead direct that money to other parts of the state.

This marks the first time this cycle that a major outside spender has decided to triage a House race—or in this case, perhaps two. Big-money players make this sort of move either because they feel supremely confident, or because they've concluded their candidate is doomed. In this case, it definitely looks like the latter.

The NRCC’s cancellation is bad news for the GOP in Texas’ 7th and 22nd Congressional Districts in particular, two seats in the Houston suburbs that have both been moving swiftly to the left during the Trump era. The 7th District in an ancestrally red slice of West Houston swung dramatically from 60-39 Romney to 48.5-47.1 Clinton, setting the stage for Democrat Lizzie Fletcher to unseat longtime Rep. John Culberson 53-47 two years later. Republicans have heavily touted Army veteran Wesley Hunt’s campaign to retake the seat, but it had already grown clear just how tough his task would be with Donald Trump leading the ballot.

The 22nd District is somewhat more conservative, but the GOP's position looked shaky even before Republican Rep. Pete Olson announced his retirement last year. This well-educated and diverse area collapsed from 62-37 for Romney to just 52-44 Trump, and GOP Sen. Ted Cruz took it only 50-49 last cycle. Democrats are fielding 2018 Democratic nominee Sri Preston Kulkarni, who has been running a very well-funded campaign, while the GOP is running Fort Bend County Sheriff Troy Nehls, who has not been.

However, while Democrats will welcome the news that the NRCC has cut bait in both races, these kinds of developments can still be difficult to interpret. That's partly because we have to rely on media reports for data about TV ad reservations, and those sources may not have access to complete information. Groups like the NRCC can also always change their minds and jump back into a race they'd previously abandoned—they'll just pay higher rates if they do so.

Then there's the fact that, in the post-Citizens United era, the party committees that used to call the shots now compete with giant super PACs, at least on the GOP side. To date, the Congressional Leadership Fund has spent or reserved $92 million on ads, while the NRCC has booked just $28 million. Last cycle, we saw the NRCC turn into something of a junior partner to the CLF, and that led to some friction between the two organizations over ad spending.

Indeed, CLF still has a hefty $6.3 million booked in Houston, so national Republicans have not given up on either race just yet. It may be that the two organizations are strategically divvying up the field—or it could mean that the NRCC has thrown in the towel and is rolling its eyes at its counterpart's refusal to face up to reality. Conversely, CLF could be fuming that the NRCC is making a huge mistake, something we most certainly have seen in previous election cycles.

For that reason, we're only willing to conclude that a Republican-held seat has truly been triaged if we know both groups have walked away from it—though again, there's still plenty of time for decisions like that to get reversed. Democrats, though, certainly aren’t acting like either contest is a done deal, since the DCCC and House Majority PAC have spent or reserved a total of $6.7 million in the Houston market.

We'll be watching for other indicators closely. To help keep track of these developments and any others over the next six weeks, please bookmark our new Daily Kos Elections 2020 House race triage tracker.