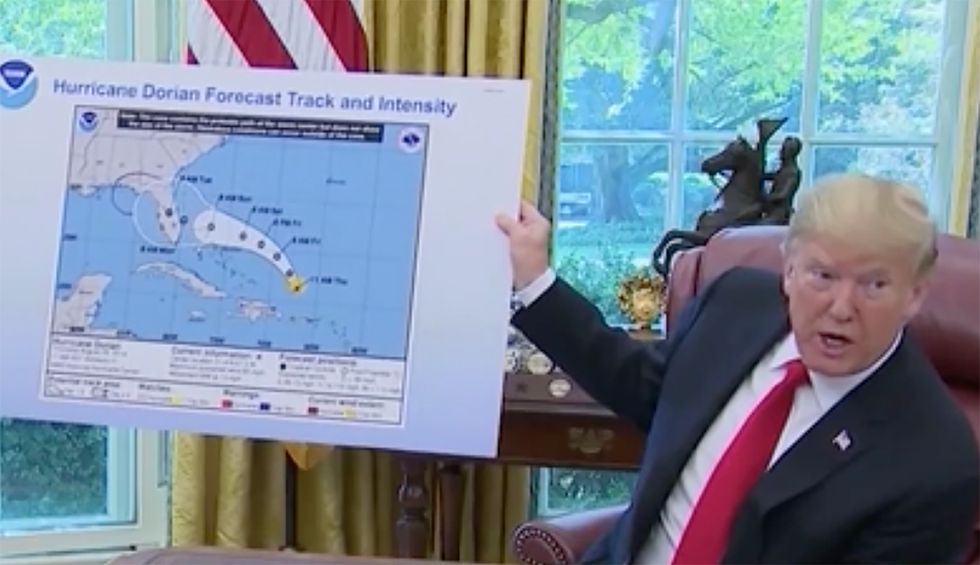 Though the election is almost upon us, Team Trump continues to fill the swamp to whatever new high-water mark they can possibly manage, putting the Absolute Least Competent People in charge of every government agency. It continues with the appointment of David Legates to the National Oceanic and Atmospheric Administration (NOAA), where he will act as "deputy assistant secretary of commerce for observation and prediction."

Have you heard of David Legates? You might have. He's a notorious climate change denier. And now he's evidently being given a key role in "observation and prediction." Or in other words, a perfect perch from which to do to government climate science what Trump's team is furiously doing to the nation’s pandemic science: deny that the bad things are happening while claiming that scientific evidence to the contrary is a dangerous plot against Dear Leader and Dear Leader's rich, dumb friends.

NPR speculates that Legates' new position "suggests he reports directly" to acting NOAA head Neil Jacobs, putting him in a powerful position to sabotage whatever reports the agency's climate scientists produce. NPR also reports that neither NOAA or Legates was willing to so much as comment on why he was hired or what he will be doing, which is always a near-certain sign that crookedness is afoot. If a government agency is going out of its way to hide what a new hire will be doing, and it’s not the CIA doing the hiring, you can bet it's because nobody involved thinks the details will make them look good.

As for Legates' qualifications, they are negative in nature. He is explicitly anti-qualified. Legates has been a climate crank for years, casting doubt on scientific findings with his own research funded by the oil industry and Koch Industries or, less ambitiously, simply by sniping from the sidelines. He is a Heartland Institute associate whose latest writing for the group was a scoffing Paul Driessen-cowritten attack on expert predictions that 100,000 Americans could die in the current pandemic—one that unironically parroted the "cure is worse than the disease" condemnation of shutdown orders, which smoothly segued into the claim that if pandemic experts were giving such outrageous predictions, then What If all of climate science was also similarly false and inflated.

Yeah. Whoops. Funny how that worked out.

Look, fuckers. If you got the pandemic numbers wrong by a factor of All Of Them a mere few months back, you don't get to feign science-knowing on anything else. Sit your fraudulent asses down, Team Heartland. [Author's note: It shall now be considered every American's patriotic duty to use swear words when referencing any of the conservative charlatans whose "cure is worse than the disease" bullshit killed 200,000 Americans and counting. If you're not calling them crooked fake-ass hoax-spewing shit-for-brains oilfuckers, I’m just saying you might not love America as much as you say you do.]

So that is presumably what we can expect from Legates in his new Trump-enabling role: ostentatiously written but bullshit-heavy feints against government scientists while ignoring his own incompetent death-producing wrongness from oh, say, Last Damn April. It is the climate denier schtick. It is the Heartland schtick on absolutely everything, all the time, and never varies in the slightest.

He and his Heartlandians thought predictions of 100,000 deaths were just crazy talk, in a nationwide pandemic, but don't you worry: They're even more paycheck-collectingly sure the climate change that we are currently seeing is a similar hoax, and doing similar unnecessary damage to the Great American Business Model of We Have Money, So You All Can Fuck Off. (Hilariously, Legates' Heartland biography mentions that he was presented with the "Courage in Defense of Science Award," without mentioning that the award is, and this is not a joke, issued by the Heartland Institute itself. The group is self-parodying.)

Anyhoo, if you're looking for a more lengthy description of just how brazenly pigheaded Team Trump's new "observation and prediction" swamp-creature is, when it comes to pooh-poohing the rest of science while claiming he alone has the Correct Answers, you can go elsewhere for the details. Even as some of the most notorious climate deniers have been forced to alter their stances, given the evidence, to recognize climate change as happening and as a product of human-caused atmospheric changes, Legates has through the years continued to claim that no evidence of human-based change exists at all.

This is less scientific courageousness than apparent ideological commitment. Indeed, his claims tip precariously on the conspiracy-mongering side of things, with pronouncements that carbon dioxide has become "that molecule by which [governments] can take control of our lives, of your efforts, and everything that goes on." (How … Gohmertian?)

And in his Heartland role, he has certainly been willing to praise the "bold" Donald Trump—a place every one of these dishonest fake-conservative talking point-dispensing charlatans naturally ends up, after selling their soul to all comers for a decade or two.

An aside: It's uncanny how every die-hard conservative hack has fallen into line behind Trump with no apparent effort, in their eagerness to wage war on the government no matter what methods are used or who the commanding general is. It's uncanny how every conservative "science" guy slips into the same exact talking points as all the others, to the point where their speeches and claims are indistinguishable, from person to person and year to year. While, of course, claiming that they are the true free-thinkers of the world.

Whatever. Whether the Heartland crew in particular were initially drawn in by Trump's devotion to tax fraud, racism, and rape or merely willing to overlook those flaws to embrace Trump's "bold" stance of having whatever policy some random check-cashing hack appearing on the Sean Hannity show tells him to have isn't known, so we are free to guess. Given the massive quantities of Actual Damn Crime among every category of Trump supporter from "government appointee" to "boat owner," though, we're probably still underestimating just how closely Trump's heart and motives resonate with conservatism's most devoted adherents.

What we do know is that the conservatives surrounding Trump are now making an all-out effort to destroy as much of the nation’s government and expertise as they can manage, before they are each pried back out of the buildings again. The damage will last, at this point, literally forever.