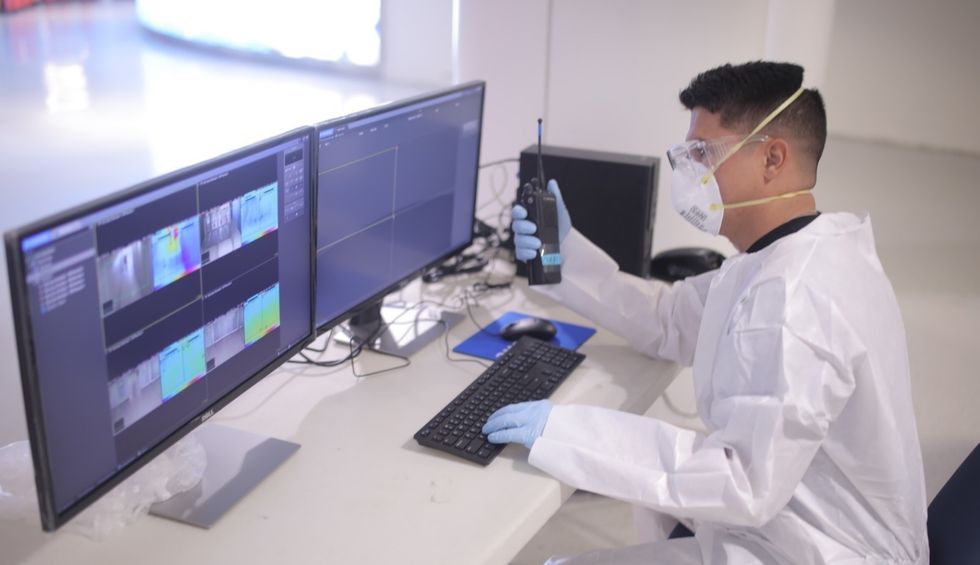 PRNG continues its mission of screening all passengers arriving at the different airports and ports of Puerto Rico to stop the spread of COVID-19 on the island. Hundreds of Citizen-Soldiers and Airmen have been present in the fight to mitigate this virus, March 20-22. (PRNG photos by: Sgt. Carlos Chabert & Spc. Melanie Colondres)
Lauren Floyd
and
Daily Kos
September 07, 2020

Health experts are warning Americans that controlling the spread of the coronavirus in the fall may come down to what happens this Labor Day weekend. “Labor Day is coming up, and we need to stress personal responsibility,” Adm. Brett Giroir told reporters Tuesday during a conference call.

COVID-19 cases have dropped 38%, with new hospitalizations down 37% across the nation since a reported peak in late July, according to CNBC. “We have to go into the fall with decreasing cases like we’re doing now. We can’t risk a lack of personal responsibility,” Giroir said.

Health officials are saying Iowa and Minnesota residents may have heightened reason to worry about the virus just as absentee voting begins. Minnesota's health department reported 77,085 cases, with 761 of them new and seven new deaths as of Wednesday. "We cannot afford to have this Labor Day weekend further accelerate the community spread, because if that happens, what comes next is going to be worse," Minnesota Health Commissioner Jan Malcolm said on Monday. “For a while now, we feel we’ve been kind of walking on the edge of a cliff.”

The Iowa Department of Public Health reported to CNN that the state has the highest rate of cases in the nation. "Iowa is in the red zone for cases, indicating more than 100 new cases per 100,000 population last week, with the highest rate in the country,” report authors said in the Aug. 30 document.

Ali Mokdad, an epidemiologist and a University of Washington professor of health metrics sciences, told CNN he’s “worried about Labor Day because people may have the impression that cases are coming down.” "Despite the fact that Covid-19 is now the third leading cause of death, people still doubt that we have a problem,” he said. “They may think they are out of danger and behave as they did around Memorial Day."

Epidemiologist Jennifer Nuzzo, of the Johns Hopkins Center for Health Security, told CNN increases in travel and interactions with others often lead to more opportunities for exposure.

“We use Labor Day as a way to take the day off, but unfortunately the virus doesn't," Nuzzo said.

A wedding on August 7 in Millinocket, Maine, ended with 134 people infected with the virus even though only 56 of the cases were from wedding attendees, CNN reported. The virus reached a nursing home 100 miles away and a county jail 220 miles away.

"What we are dealing with is a giant tube of glitter,” Maine Center for Disease Control & Prevention Director,Dr. Nirav Shah said. “You open a tube of glitter in your basement then two weeks later you are in the attic and all you find is glitter and have no idea how it got there." "That's what Covid-19 is like,” Shah added. “You open up glitter in Millinocket and next thing you know you are finding traces of it at a jail complex in York County. It's just emblematic of how quickly, silently and efficiently it can spread."