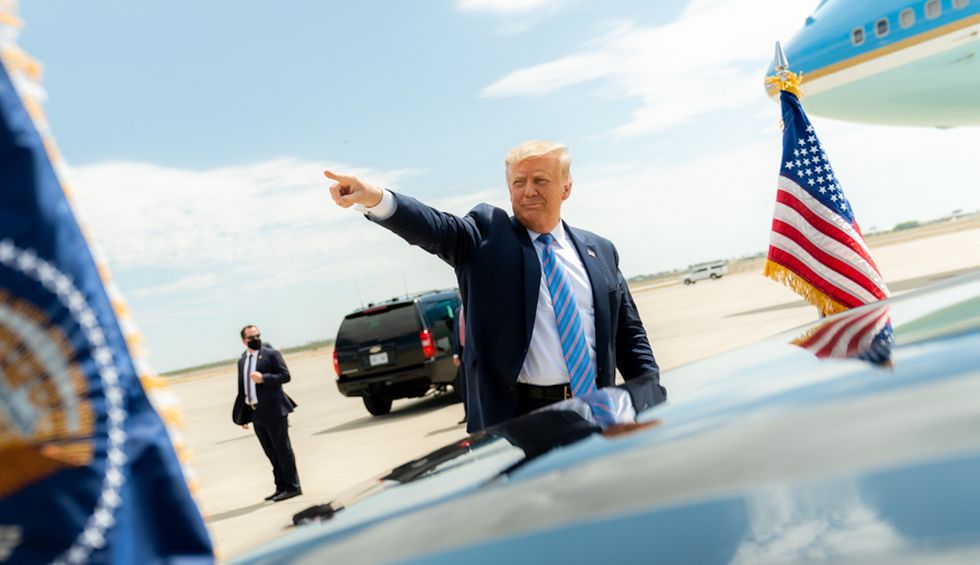 President Donald Trump, in a 2000 New York Times op-ed, cited the benefits of voting by mail and email as the principal reason why he had briefly run for president as a Reform Party candidate.

"The Reform Party was my chosen vehicle because its nomination process does not involve a long string of early primaries, but instead culminates in one national primary conducted by mail and e-mail in August," Trump wrote.

Trump, who votes by mail, has repeatedly claimed without evidence that the practice invites fraud.

"With Universal Mail-In Voting (not Absentee Voting, which is good), 2020 will be the most INACCURATE & FRAUDULENT Election in history," Trump tweeted July 30.

When Fox News anchor Chris Wallace pushed him on whether he would be a gracious loser, should the election come to that, Trump pointed to mail ballots as a reason he would not.

"You don't know until you see, it depends. I think mail-in voting is gonna rig the election, I really do," he said.

On Saturday the president tweeted that "unsolicited" mail-in ballots were "a major threat to our Democracy," and that "almost all recent elections" — even small ones — that used the system have been "a disaster."

But when Trump briefly launched a presidential campaign 20 years ago, he called that very same process "refreshingly democratic." It would, he wrote, "lend itself to a candidate with national name recognition and the financial resources to flood the process with new people" — a candidate like himself.

Primary votes for the Reform candidate that year, as Salon noted at the time, could be cast in person or remotely by mail, phone or by the Internet.

Ballots would be sent automatically to anyone who registered as a member of the party, anyone of any party affiliation who had signed a Reform candidate's petition in a state that had not yet recognized the party, and in fact anyone else who asked to participate.

The op-ed, published Feb. 19, 2000, and titled "What I Saw at the Revolution," was Trump's autopsy of his own failed candidacy and justification for abandoning the Reform Party, an experience he called a "great civics lesson."

While Trump offers only one reason for choosing the Reform Party — the ability to vote by mail or email — he puts forward a number of arguments for leaving, one of them being the "fringe" elements in the party, which became a haven for right-wing extremists such as David Duke and Pat Buchanan.

"I saw the underside of the Reform Party. The fringe element that wanted to repeal the federal income tax, believed that the country was being run by the Trilateral Commission and suspected that my potential candidacy was a stalking horse for (take your pick) Gov. George W. Bush, Senator John McCain or Vice President Al Gore," Trump wrote.

(Jeffrey Epstein, Trump's friend at the time, was a member of the Trilateral Commission, a shadowy multinational organization and subject of "new world order" conspiracy theories.)

Trump also laid blame on his nemesis John McCain, who ran on a reform message that year as a Republican candidate and, according to Trump, "made the opportunity for this contrast difficult, and depending on the outcome of the South Carolina primary, perhaps impossible."

He also rejected the far-right (and far-left) candidates vying for the nomination that year.

"Although I am totally comfortable with the people in the New York Independence Party, I leave the Reform Party to David Duke, Pat Buchanan and Lenora Fulani," Trump said. "That is not company I wish to keep."

Notably, in 2000 Trump was eager to disavow Duke, the former grand wizard of the Ku Klux Klan. But when asked in 2016 to repudiate Duke's endorsement, Trump famously replied, "I don't know anything about him."

The op-ed is written in an arch, florid voice that sounds nothing like Trump. Longtime Trump ally and strategist Roger Stone, who played a key role in his Reform Party bid, initially denied to Salon that it had been ghostwritten.

"Nobody ghostwrites for DJT," Stone told Salon in a text message.

However, Dave Shiflett, the co-author of Trump's 2000 campaign book "The America We Deserve" and a member of a Washington-area ghostwriting group, told Salon that while he had not written the New York Times piece, he wrote a Los Angeles Times op-ed on Trump's behalf that same year.

When informed of this, Stone refined his previous answer: "I may have helped synthesize his conclusions after our exploratory effort."

"Trump didn't write it himself," said Allen Salkin, an aide to Trump's 2000 campaign who co-wrote a book about the experience, called "Method to the Madness."

"He and Roger would put out the broad themes. Trump just sort of talks and a writer records it and turns it into a story," he explained.

When asked what drew Trump to the Reform Party, Salkin said that the party-agnostic primary mechanisms, including voting arrangements, appealed to Trump's torpid nature.

"He didn't want to do the hard work of getting on the ballot in every state, which was what would be required," Salkin said.

The Reform strategy in 2000 was that, by compelling candidates to petition their way onto the ballot through collecting signatures, the party could grow itself at the same time. The incentive for the candidates was that each qualified signatory could then vote in the Reform primary, regardless of party affiliation, allowing them to draw from a broad pool of voters.

But signature gathering is expensive, a job candidates often delegate to subcontractors. Stone said that big names on the ballot, like Trump's, could inflate the price, which is typically around $2 per signature, up to as much as $5 per signature.

Trump, then, as an ostensible billionaire, could buy his way onto the ticket by outspending the competition on signatures, then getting those people — even registered Democrats and Republicans — a mail-in ballot to cast on his behalf.

"Getting on the ballot in those 29 states could cost $6 to $8 million," Stone told the Wall Street Journal at the time. "I don't think Pat's got the table stakes," he added, a reference to Buchanan.

In a text conversation with Salon, Stone credited Trump's then-girlfriend Melania Knauss, now the first lady, as the one who foresaw Trump's success and urged him to run in 2000. Trump, however, briefly ended his relationship with her during the campaign, causing a tabloid furor.

According to the New York Daily News, the breakup was an olive branch to socially conservative Reform Party leaders.

"An associate of the mogul suggested Trump decided to distance himself from Knauss after she posed nude in his plane," the outlet said, adding that Stone denied there was a political calculus.

After the breakup, the New York Times asked Trump, outside a party for his Miss USA pageant, if he thought it would be difficult to campaign without a significant other.

''Melania is an amazing woman, a terrific woman, a great woman'' Trump said, looking as sincere as one could imagine Mr. Trump could look, ''and she will be missed.'' Then he headed for a V.I.P. lounge where Ms. Pressler and several of her potential successors (and perhaps Ms. Knauss's) were waiting.

Trump ended his Times op-ed, published the month after the breakup, by reflecting on the campaign as "one of my great life experiences."

"I had enormous fun thinking about a presidential candidacy and count it as one of my great life experiences," Trump said. "Although I must admit that it still doesn't compare with completing one of the great skyscrapers of Manhattan, I cannot rule out another bid for the presidency in 2004," he said.

The White House did not reply to Salon's request for comment.